It was back in 1999, when the aqueduct and surrounding area was first submitted to the 'tentative list' of properties being considered for UNESCO World Heritage Site status. 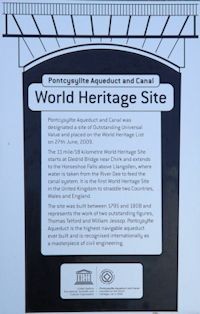 It was formally announced in 2006 that a larger proposal, covering the Llangollen Canal from the aqueduct to Horseshoe Falls would be the United Kingdom's 2008 nomination.

The length of canal from Rhoswiel, Shropshire, to the Horseshoe Falls, including the main Pontcysyllte Aqueduct structure as well as the older Chirk Aqueduct, were duly visited by assessors from UNESCO

The aqueduct was finally inscribed by UNESCO on the World Heritage List on 27 June 2009.

Today the World Heritage site is managed by a range of organisations, including the Canal & River Trust in Wales, working in partnership to deliver to protect, preserve and promote its outstanding universal value.

Not just an aqueduct…

As partners, we contribute to UNESCO's www.pontcysyllte-aqueduct.co.uk website. It has a handy tool to help you build an itinerary so you can make a weekend of it and really explore the 11 miles of the World Heritage Site.

Our canal starts at Horseshoe Falls, Llantisilio near Llangollen and along though Trevor and Froncysyllte on to Chirk, travelling under our many bridges, over two aqueducts and through two tunnels.