Mossdale, Scorpio and Gifford in the 1970s

49 years ago, the first organised museum working parties took place and we are delighted to share their stories.

On Sunday 6 February 1972, the first organised museum working parties took place; on Mossdale at Northwich on the River Weaver and on Scorpio at Burscough on the Leeds and Liverpool Canal.

The fascinating stories behind our first boats

Scorpio and Mossdale, along with Gifford were the first boats in the collection of the Boat Museum, later the National Waterways Museum at Ellesmere Port. The founding volunteer organisation, The North Western Museum of Inland Navigation (NWMIN) was established in 1971 and Peter Froud, one of the founders owned Mossdale. He had bought the vessel in 1964, planning to convert it into a floating restaurant.  This didn’t happen and he offered Mossdale to the planned Museum.

Peter kept Mossdale in Northwich, tied up against a concrete barge below Hunts Lock on the River Weaver, as shown in this photograph. 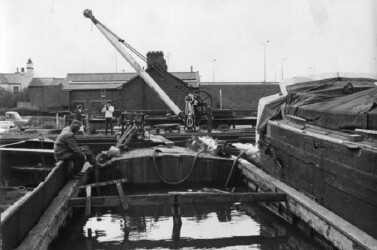 Scorpio’s working life finished in 1971 carrying coal from Plank Lane to Westwood power station, Wigan when she was bought by Ken Williams for the princely sum of £2.00. He then donated it to the Museum which was in the early planning stage. In December 1971 Scorpio was towed by Alan Jones with Clematis to Worsley and it was subsequently taken to Burscough where, along with George, it was cared for by staff from Liverpool Museum before being taken to the Museum on its opening day, 12th June 1976. 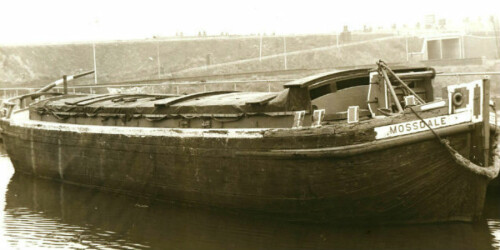 Mossdale was built in 1876 by the Shropshire Union Railway & Canal Company, Chester.  She is believed to be the only remaining wooden Mersey Flat in the world and was towed by horses or tugs.  Her hull was carvel construction of oak, elm and pitch pine and she traded between Ellesmere Port and Liverpool.  Originally known as “Ruby” she was renamed “Mossdale” when bought by Abel & Son in the 1930’s. They extensively rebuilt and deepened her to obtain maximum load for minimum displacement. 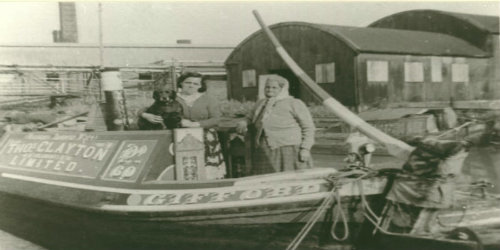 Gifford belonged to another of the founder members of NWMIN, Edward Paget-Tomlinson who was keeper of Shipping at Liverpool Museum. Gifford was also being repaired at this time, by Ken Keay in the midlands.

Look out for Mossdale and Gifford on your next visit to the museum.