The 2015 Boxing Day floods virtually washed away the Elland Bridge on the Calder & Hebble Navigation. Our team of engineers quickly carried out a detailed inspection and found it had to be totally rebuilt.

And so began a year of hard work and close collaboration with local councils, utilities companies and community groups.

Here are some of the highlights from the year it took our Canal & River Trust heritage and engineering experts to rebuild Elland Bridge.

As the bridge is Grade II Listed, the new bridge would need to re-use as much of the existing stone as possible. A temporary footbridge was opened to re-connect the town and a temporary services bridge was designed to carry the large number of services while the main bridge was re built.

The first time a listed structure had to be demolished

Demolition of Elland Bridge started on Monday 25 April 2016. Pontoons with crash mats were floated under the bridge and the stones marked up ready for removal. The stones will be carefully lifted, sorted, crated, shrink wrapped and removed to a secure Calderdale Council site.

By mid-May, the final bridge design had been amended taking into account comments from our engineering team and utility companies. And in June, after reviewing all the options collectively – and after consulting with Calderdale – we decided that the best option would be to relocate the position of the bridge 25cm to the south. (Fun fact that for you trivia buffs).

On 4 July, following a busy weekend completing concrete abutments, the canal re-opened and the first boat went through.

Every old stone was recovered

In August we added flood branded signage on the temporary footbridge explaining the cause of the damage, demolition and work to date at the bridge. This proved a popular read with the local residents.

Then, at the end of September, a significant milestone was reached with the Elland Bridge arch lift. 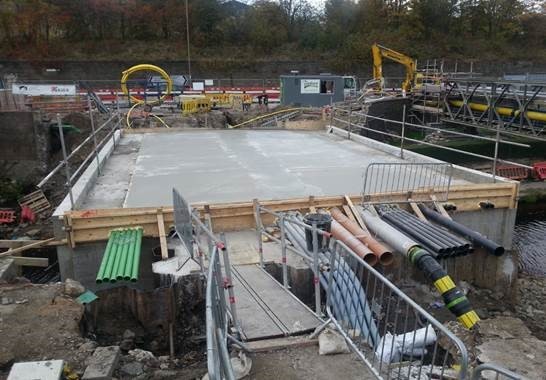 A site meeting was held with the seven utility companies and their contractors involved in helping to rebuild the bridge and the community facilities that cross it, to finalise details for the diversion of services back in to the new bridge. This included gas, electricity, water, sewage, telephone and data cables. By the end of October the gas supply will be the first service to be diverted off the temporary bridge and into the new bridge next week.

Stone masons continued to lay masonry and three of the four wing walls were already above water level.

By the middle of November everyone was ready to close the canal to navigation again to given them better access around the bridge. Gas, electricity and data cabling was reconnected.

We held one of our ‘open days’ on Saturday 25 November. This proved to be a very popular event with almost 1,000 people visiting during the day to gain better understanding of the complexities of the work. Not that many of them would have realised that the day before, work was carried out to install 80 tonnes of hard-core and 300m of crowd barriers to create accessible areas for the public.

Now in early December 2016, the public pedestrian route across the canal was moved from the temporary footbridge, in use since January, onto a scaffold structure on the new bridge itself. The utilities continued to divert services back into the new bridge and the stone masons continued to construct the masonry wall up to parapet level.

After Christmas and Boxing day 2016, work picked up. By the end of January another milestone was reached. The temporary scaffold structure was removed, which allowed full construction access to the bridge deck. 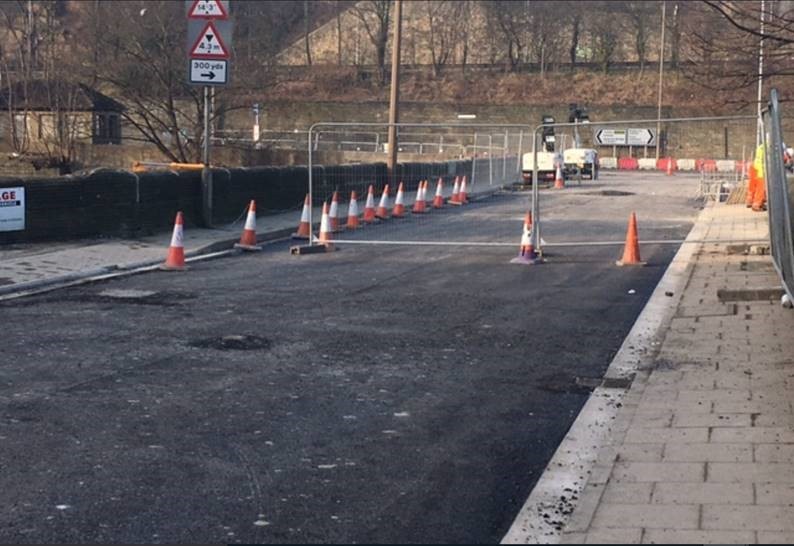 The following week, the base course tarmac layer was laid on the bridge carriageway.

By now, despite the freezing, winter weather holding things up a little, the stonemasons had reached the stringcoarse level. But come early February 2017, the weather was in our favour. The stonemasons were able to complete the eastern elevation by the end of the week. They completed the last remaining pier between the bridge and approach wall over the weekend.

Reconnecting the road – and the village 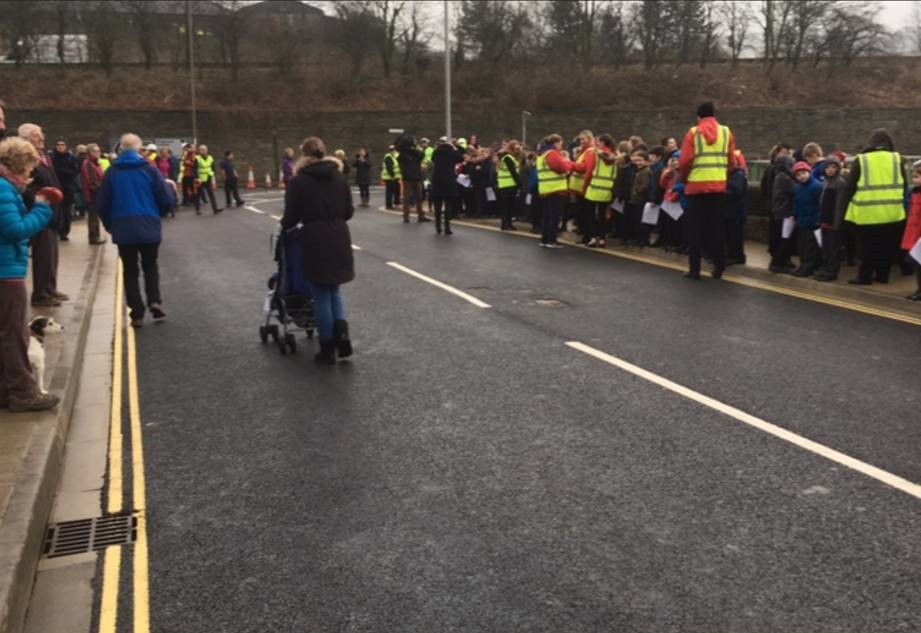 A very successful ribbon cutting took place with brass band and school choir. Efforts now concentrated on the canal works and re-opening the canal in March.

Early March, and work started on facing the towpath washwall under the bridge in stone and connecting it to the existing towpath. The large coping stones recovered when the old bridge was demolished were brought back to site to be positioned on top of the wall and a stone sett surface laid.

On Friday 17 March Work the towpath was completed and the canal filled ahead of the re-opening of the canal to traffic the next day. Although, the official opening event was being arranged for April. In fact, one of the first boats to go through the newly opened Elland Bridge on Friday afternoon was Warwick, from Shire Cruisers, Sowerby Bridge.

All the final clearing up and bits and bobs were completed soon after.

You can find out more about Elland Bridge with the links below.

“It was heart-warming to see everyone out working together.”

Getting the local community involved

Schools and other groups find out more about Elland Bridge

Up for an award