A 10-year labour of love is nearing its end for volunteer Mike Rogers, who has been restoring the historic crane at Dundas Wharf on the Kennet & Avon Canal. His work will be finished in the next few weeks and the crane will stand proudly in all its glory once more.

I’ve always been interested in canals. I grew up near the Grand Union Canal and can just about remember the last working boats. I skippered the Kennet & Avon Canal Trust’s Jubilee trip boat when it operated from Dundas. I also helped look after the Claverton Pumping Station near Bath.

I like nature, history, walking and fishing. The canal ticks all those boxes for me. My outstanding nature highlight was taking the Jubilee out for an evening trip at Dundas and seeing all the bats flying ahead of the boat, caught in the beam, a magical moment.

I used to be a mechanical engineer with the Merchant Navy and Ministry of Defence. When I retired I needed something to keep my mind and body active and I’ve been volunteering for 15 years now. 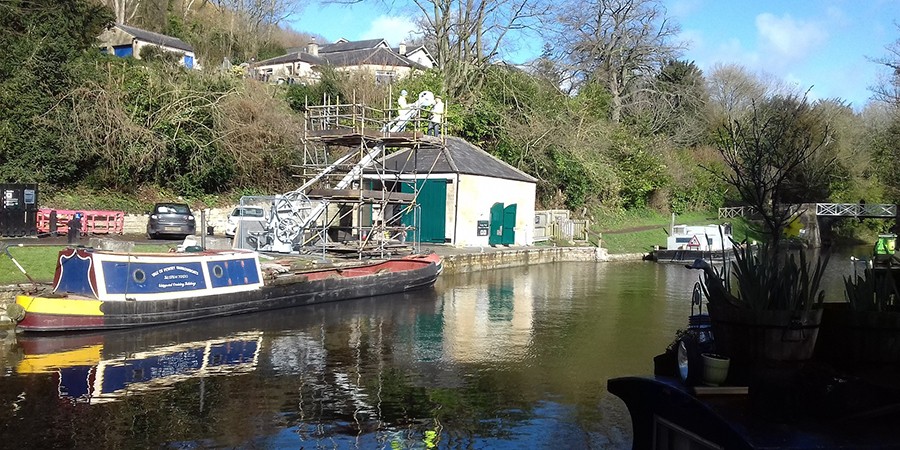 I have been working away at this historic crane for 10 years. The crane is constructed from cast and wrought iron and was erected in about 1812, soon after the canal opened. The firm that built the crane, Acramans of Bristol, stopped trading in 1859 and this is thought to be the last surviving example.

The crane had been covered in a thick tar-based black paint and some parts were severely corroded. For years I chipped away at the paint with a hammer and chisel before we had a power supply and obtained a rotating blaster - I was able to make real progress then.

We stripped it back to the bare metal and repainted it with a high-performance paint following advice from the Trust’s Heritage Advisors. The brass fittings were stolen long ago, and all parts are rusted solid, so it can’t work, but it’s an important piece of canal history.

It was used for loading and unloading heavy cargo from the boats that used the canals, and it was also used to lift the stone weights which were kept at the wharf for gauging boats, so the correct tolls could be levied.

It’s been a real collaborative effort with scaffolding and support provided by Canal & River Trust, paint supplied by the Kennet and Avon Canal Trust while the actual work was undertaken by volunteers.

Dundas is such a lovely place to volunteer and it’s so rewarding to see the progress we are making. When we’ve finished painting the crane we’ll spruce up the area around it and go back to Towpath Taskforce activities such as filling potholes and cutting back vegetation. We’re also replacing broken mooring stones.

I love sitting outside the Toll House in the summer eating lunch in the pleasant company of other volunteers – that’s all part of why it works for me.