Hidden wonder of the West Midlands - Edstone Aqueduct is good for another 200 years.

The Edstone Aqueduct, now 200 years old was nearly not built. Its survival is thanks to the many enthusiasts who saved it from dereliction. On-going care and maintenance by the Canal & River Trust means it’s good for another 200 years.

Built on the cheap

Building of the Stratford Canal began in 1793 and only reached from King’s Norton junction to Hockley Heath where the money ran out.  It eventually reached its full 36 km (25.5 mile) length arriving in Stratford-on-Avon in 1816. The canal has a northern and southern section, with the divide at Kingswood Junction where access to the Grand Union canal is gained.

Built in the heyday of the canal era, a local land agent called William James, invested his own resources to achieve his vision of linked navigations between the River Avon and the Midland canal network. In partnership with the engineer William Whitmore the southern stretch of the waterway was cut during 1812 to 1816.

The South Stratford canal’s unique character is due in part to the cost cutting measures the Williams introduced, among them the prefabricated cast iron split bridges, narrow locks and single leaf gates. It is a little surprising then to find 3 aqueducts built on the South Stratford, one of which holds the record as England’s longest cast iron aqueduct to this day, 200 years after it was completed.

The rise and fall of canal mania is well recorded. The South Stratford did not escape the decades of disuse and neglect of our inland waterways. By the 1900s, the South Stratford was already a backwater by-passed by the Grand Union. By 1958 its very existence was threatened as the County Council applied for a Warrant of Abandonment for the canal. Local enthusiasts rallied to save the canal and were successful.

The Stratford Canal now has a revered place in the history of the canal restoration movement, led by Tom Rolt and Robert Aikman, activists championed the legal rights of passage. In the early 1960s the IWA successfully pioneered the use of voluntary labour and shows how effective such popular mobilisation of effort and expertise could be in restoring the waterways. Without their efforts the Edstone Aqueduct would not be here for us to enjoy.

A waterway in the sky

The Edstone Aqueduct, also known as the Bearley was completed in 1816 and is among the earliest prefabricated structures, a kind of kit. Its cast iron trough is formed of 35 separate sections bolted together and carries the waterway across 3 railway tracks (one of which is now disused), a minor road, a stream, and a field. Thirteen brick piers create the 14 spans, to total 146 m (498 ft). The trough is 2.7m wide (9ft) and 1.5m deep (5ft).

The design of the aqueduct is considered somewhat unusual as the towpath is set level with the base of the trough, similar in design to Telford's aqueduct at Longdon on Tern. Telford improved the design for Pont Cysyllte Aqueduct where the towpath is level with the top of the trough and cantilevered over the waterway, thus providing a wider waterway without increasing the overall width of the structure.

The Edstone two approach embankments sit in different parishes, Wootten Wawen and Aston Cantlow, carrying pedestrians and boaters over railways, roads, a stream and fields. One abutment wall has been reinforced with masonry and the other has been buttressed. Soon after the structure was built it became apparent that the thermal expansion and contraction resulted in excessive movement. Thermal expansion had not previously been a design issue because on earlier, shorter spans, it did not produce a significant effect. In a 20 0C temperature change, for example, the trough will expand by up to 65 mm. The piers are undamaged because their slenderness renders them flexible. 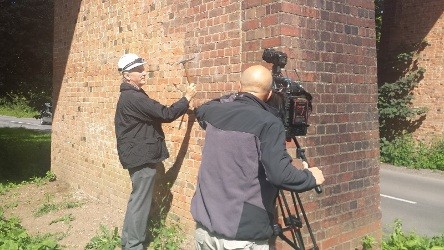 The Trust’s regular programme of inspection, maintenance and repair keeps many thousands of historic structures in good working order. All 3 of the Stratford Canal aqueducts have benefitted from HLF and EU funding to support major works so they continue to operate as part of a working waterway and can be enjoyed by generations of boaters and visitors to come.