We are currently working on a major project to restore Toddbrook Reservoir after the dam auxiliary spillway was damaged in August 2019 after a period of intense rainfall.

Preparatory site works are due to start at Toddbrook Reservoir from 20 June onwards, in advance of the main construction phase which is scheduled to begin in the autumn.

Initial enabling work includes setting up the construction site, access and welfare in the Memorial Park, the demolition of the Sailing Club and delivery of essential materials such as sheet piles. Access to the site will mainly be along Reservoir Road.

A footpath will be retained across the park, connecting Reservoir Road along the river to the Memorial Park Bridge and will feature a viewing point for the construction work.

Our main contractor Kier have appointed a Stakeholder Manager who will keep near neighbours informed of construction schedules and traffic activity on a regular basis. Updates will be provided on notice boards, by local letter drops, email and face-to-face public meetings.

Please direct any construction specific queries to toddbrook@kier.co.uk or 07731 987228. 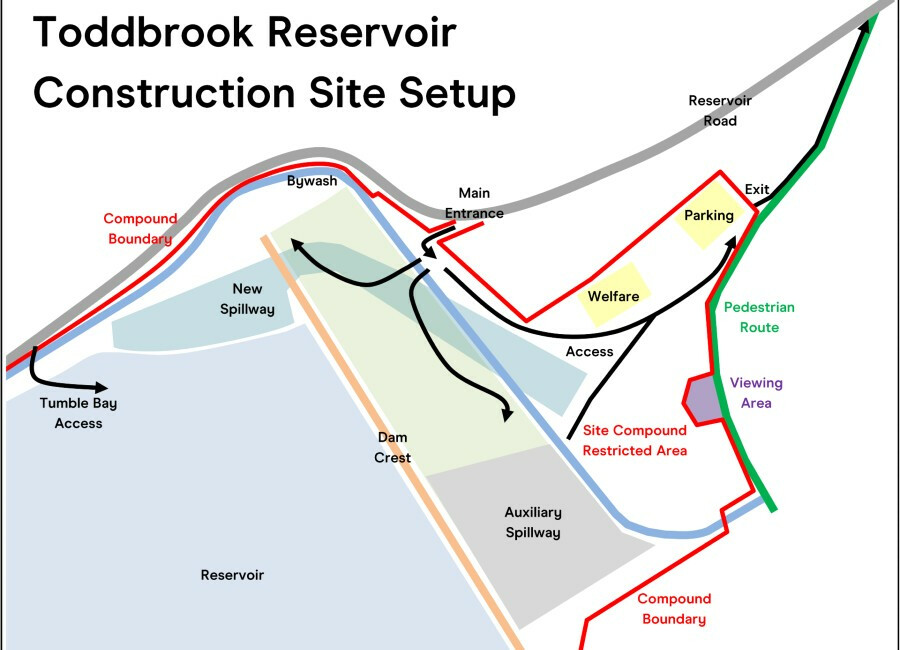 We are pleased to report that in early March, we were granted planning permission by High Peak Borough Council to start the major permanent repair works to restore Toddbrook Reservoir.

We are grateful to everyone for their continued patience and support, as we appreciate the project will inevitably cause disruption for some Whaley Bridge residents, particularly those living nearby.

Following two public consultations and discussions with local residents, we have adapted our plans and designs to respond to feedback and to cause the least inconvenience. We will do our very best to mitigate noise and disruption as far as we are able. The reservoir will be restored to the most stringent 21st century engineering standards - keeping everyone safe is our top priority.

The major two year project will involve building a new overflow structure to the north of the dam. This will include a side channel weir, ‘tumble bay’, spillway channel and stilling basin which will link into the existing bypass channel flowing into the River Goyt in the town’s Memorial Park.

The concrete panels from the 1970s-built overflow spillway, damaged in summer 2019, will be removed. The dam will then be repaired and grassed over.

To make way for the new spillway works, the sailing club will be relocated behind the new tumble bay. The current clubhouse will be taken down and replaced by a new sailing club slipway, clubhouse, boat storage and car park. Another building close to the works, the former Victorian reservoir-keeper’s house, Toddbrook Lodge, has been acquired by the Canal & River Trust and will be carefully preserved. It will initially serve as a site office for the construction works.

Over the next few months, the Trust and its contractor Kier will set up a temporary site compound at the northern end of the Memorial Park, by the playground next to the dam. Preparation work will include installing new fencing and hoardings, tree felling, creating new access routes to the compound and tumble bay area, diverting drainage and feeder channels, and essential site clearance. Improvements to the Reservoir Road surfacing will also be required.

A footpath will be retained across the park, connecting Reservoir Road along the river to the Memorial Park Bridge and will feature a viewing point for the construction work.

New play equipment is being installed as a temporary measure at the top of the dam, next to Whaley Bridge Athletic Football Club. At the end of the project in 2024, a new playground, similar to the existing one, will be rebuilt at the same location in the Memorial Park. The park will also be re-landscaped with replacement trees, wildlife habitats, extra paths and a new footbridge over the bypass channel. The project will achieve a net biodiversity gain of more than 10%.

Our contractor Kier will provide a dedicated traffic liaison officer who will be onsite throughout the works to help with any issues. Construction access will be along Reservoir Road and we very much appreciate the cooperation and support of those residents in particular as we make preparations for the main works.

During busy periods, weekday traffic along Reservoir Road will be managed by having staff on duty with ‘stop’ and ‘go’ signs and radios to provide a more personal and interactive traffic management service. There will be no temporary traffic lights at weekends or evenings.

The main construction phase around the dam is likely to start in the autumn and take around two years to complete, with the aim of re-opening the reservoir in 2024.

This will be followed by works to the inlet cascade, at the far end of the reservoir, to increase resilience to high flows from Todd Brook stream. High volume pumps will remain in the reservoir to manage water levels until the end of the restoration project.

Why do we need to restore Toddbrook Reservoir?

Toddbrook Reservoir normally provides just over a third of the water supply needed to keep the beautiful Peak Forest and Macclesfield canals operational. It is essential we repair the reservoir to secure the long term future of the canal network in High Peak and East Cheshire.

As part of the first phase of restoring Toddbrook Reservoir, an important repair project to the dam’s damaged auxiliary spillway was completed in late summer 2020, greatly increasing its resilience against extreme weather events.

A protective, waterproof nib or short wall has been added to the crest of the dam wall above the damaged spillway. This reaches down to create a seal with the dam’s clay core and ensures no water from inside the reservoir can penetrate beneath the concrete slabs at the top of the spillway.

Summer 2020: Works to increase the resilience of the dam wall were completed.

After the emergency in August 2019, the masonry weir at the inlet channel was raised with the installation of mesh baskets filled with sandbags.

The plan is to replace these with a new structure, incorporating a footbridge, to provide a greater degree of control over how much water flows from the brook into the reservoir or around it via the bypass channel.

During normal weather conditions, while the reservoir remains drained, all flow is sent down the bypass channel ie. none into the reservoir. Expert hydrologists are constantly monitoring localised weather forecasts and water levels in the reservoir and bypass channel via a series of remote sensors. They can then alert colleagues if the on-site pumps need to be activated or sluice gates opened.

Following intense heavy rainfall at the end of July 2019, several concrete panels on the Toddbrook dam spillway collapsed. Around 1,500 residents of Whaley Bridge were evacuated from their homes for up to six nights as a safety precaution. Trust staff and volunteers worked around the clock with the local emergency services, including Derbyshire Fire & Rescue, Derbyshire Police and the Environment Agency, to stabilise the dam wall.

Over a billion litres of water were pumped from the reservoir during this emergency phase and water levels continue to remain nearly empty while the dam is repaired. This is likely to take several years.

Want to get in touch or need more information on Toddbrook?