The Peak Forest Canal is one of Britain’s most scenic waterways, running through magnificent landscape to the edge of the Peak District.

Before you go by boat, bike and boot...

... see our stoppages section and plan your route

For much of its length, the canal runs alongside the pretty River Goyt. Both the canal and the river are havens for plants and wildlife. The nature reserve of Goytside Meadows is home to a stunning variety of wild flowers.

The Peak Forest Canal boasts two Scheduled Ancient Monuments in its 15-mile length – the grand, three-arch Marple Aqueduct and the historic Bugsworth Basin. Bugsworth Basin is the end of the canal, where it once connected with a horse-drawn tramway that carried gritstone, limestone and burnt lime to be loaded at Bugsworth for onward carriage to Manchester, the North West and Midlands.

You find several places to visit along the canal including the village of Marple with its Oldknow walks and heritage trail. Take a look at Oldknow's website for more about out Oldknow heritage project at Marple.

The Peak Forest Canal was begun in 1794 and was designed to transport limestone from the quarries of Derbyshire. The canal opened in 1800, but it was not until 1804 that Marple locks were finally completed. It runs for a little under 15 miles from Dukinfield Junction on the Ashton Canal to Bugsworth Basin, with a short spur to Whaley Bridge.

Stone was brought down the hillsides to Bugsworth Basin by a plateway, a flat iron surface upon which broad-wheeled trucks were kept in line by L-shaped uprights, and then taken by boat to Manchester. By the end of the 19th century the basin was handling over 600 tons of limestone per day. Other cargoes included coal, cotton, grain and manufactured goods, with commercial traffic continuing on the canal until 1959, though Bugsworth Basin had closed in 1926.

The canal is in two distinct parts. The upper section, one of the highest summits in the country, runs along the valley of the River Goyt and the lower along that of the River Tame. Separating the two is Benjamin Outram's splendid stone Marple Aqueduct together with its slightly higher railway viaduct neighbour running parallel. At Marple Junction the Macclesfield Canal, 30 years junior to the Peak Forest line, is encountered. Between the junction and the aqueduct is the magnificent flight of 16 locks rising over 210 feet (64m).

The Peak Forest Canal has long been associated with the Ashton and Macclesfield Canals, as all three were in common ownership of the Manchester, Sheffield & Lincolnshire Railway prior to nationalisation of the canals after World War II. Following a period of dereliction in the 1960s, restoration was begun by local volunteers and the length between Marple and Dukinfield was reopened along with the Ashton Canal in 1974. This now forms part of the Cheshire Cruising Ring.

In 2015 the Upper Peak Forest Canal & Marple Lock flight were awarded a prestigious Green Flag in Keep Britain Tidy's Award Scheme, the first canal in the country to achieve this. 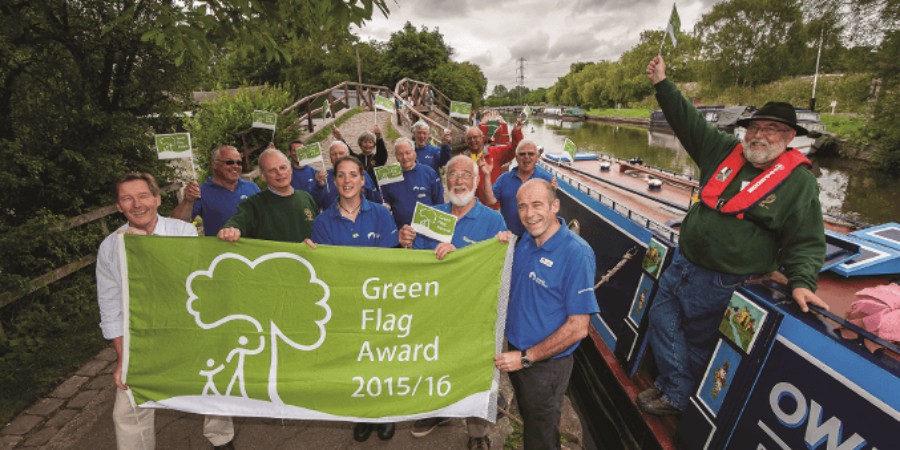 As a place to visit, this puts the canal alongside the best parks and other public spaces in the country, and is a huge testament to all the hard work done by volunteers and our Canal & River Trust colleagues in keeping the canal in a great way.

Has the Peak Forest retained its Green Flag Award? Find out more about the award winning canals in your area