Celebrating the old and the new at Carpenters Road Lock

People of all ages have been getting involved with the restoration of Carpenters Road Lock in London, from local school children to proud east Londoners wanting to tell the story of their local area.

This autumn we’ve been recording memories of the past and simultaneously helping a new generation to make strong connections to the waterways near them, all in association with the restoration of Carpenters Road Lock in London.

Recording memories of the past

People’s memories are important, they help to tell the story of our well-loved waterways. We recently called for volunteers to help us record some oral histories – local people telling their stories and memories of Carpenters Road Lock.

A mixture of new and existing volunteers signed up for the opportunity, and took part in four free workshops with Eastside Community Heritage where they learned how to interview people about their lives and experiences. Our volunteers gained new skills and interesting insights into their local heritage.

“Some of our volunteers felt they had a duty to tell the story of east London before the landscape changes beyond recognition. After the training, the volunteers were initially nervous about going out on site and interviewing strangers, but built up a great deal of confidence within minutes of putting their new-found skills into practice. We hope that these oral history recordings will contribute to the heritage interpretation placed around the lock.”

Joanna added: “We also hope that some of our volunteers will go on to be trained as guided walk leaders in and around Carpenters Road Lock.”

It is especially important to introduce the younger generation to our canals and rivers, raising their awareness of both the waterways themselves and their local heritage. Many children living near Carpenters Road Lock have never been on a boat or even seen a lock, so we wanted to take the opportunity to give them some life-long memories. 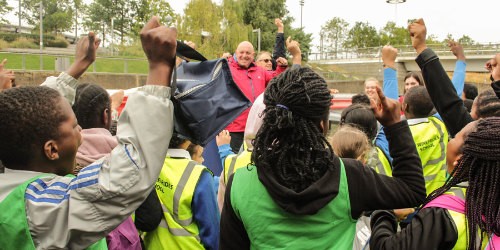 We’ve been taking school children on boat trips and leading land-based activities in the Queen Elizabeth Olympic Park to teach children about why the lock was built, how the lock works and how the restoration work is going. Together with our Explorers team we’ve also been delivering water safety training sessions in local schools for more than 600 children.

We’re also producing lesson downloads that can be incorporated into the phone app we’re developing as part of the heritage interpretation, which should be launched towards the end of the year.

Find out about the new showpiece waterside destination for east London in the heart of Queen Elizabeth Olympic Park.