I emailed long serving committee members enquiring about club beginnings. Some of these folks are approaching their more mature years and I thought one or two may have been around when the club was first constituted. This proved not to be the case. I discovered we’re one of the oldest established angling clubs in the country, being in continual existence since the 1850s.

Nearly 170 years later we have a thriving membership of all ages. Stuart Eggleton recently chatted to our oldest club member, aged 92. He informed Stuart there was a junior section back when he started fishing, aged 10. Then, there was no requirement for qualified, licensed Let’s fish coaches. Matches were run by various senior members. Simon Cordingley fished junior matches in 1974/1975 run by then club President Tom Richardson, ably assisted by John Hill.

Venues were the same as visited by treasurer, Andy Law who recollects participants being picked up by coach at the bottom of Baring Road, Northampton and transported to the River Great Ouse at Lavendon and Newton Blossomville plus the Grand Union Canal at Yardley Gobion. There’s even a full list of our current portfolio of waters.

The club had a strong junior team when the two Ringer brothers, Steve & Phil were growing up. Dad Geoff was club secretary. The Ringer brothers like so many kids in that era grew up near canals, giving them the perfect grounding for later success. They were following in the footsteps of earlier greats, now recognised as the fourth Let’s Fish principle.

On at least one occasion, the team was triumphant on the Luton junior league held on the Grand Union. 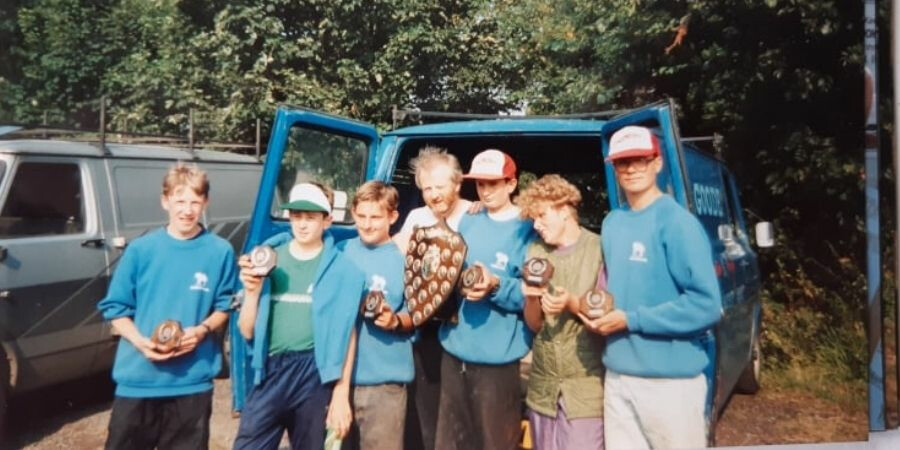 Paul Dougie Douglas recalls an active junior section in 1989 when he first got started with typically between 20 to 40 participants at matches run by adult volunteers such as Peter Chillingsworth, Geoff Ringer, Bob Reed and Trev Griffiths. Venues were split between canals, rivers and stillwaters.

The club were regulars in the junior national, finishing 16th on the Grand Union in 1990, the year where young Simon Mottram, now a fellow Let’s Fish coach made something of a splash. 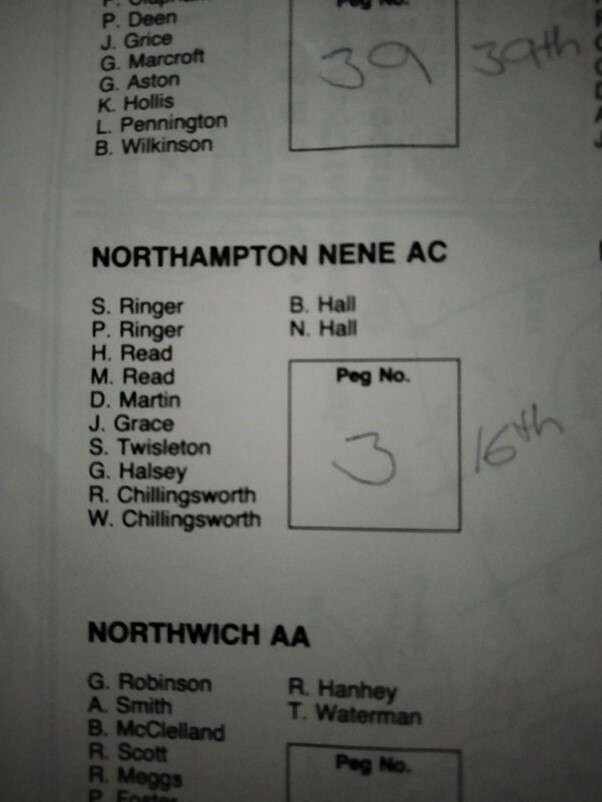 As for Dougie, he ended up captaining the club in his final junior year national around 1996/7.

The club famously won the All England National back in 1963 on the Gloucester & Sharpness Canal. Consequently, team captain Dennis Jelley was picked to represent England the following year.

Nearly 60 years later, after a 12 month delay due to the pandemic, the club successfully hosted the 200 peg Individual National and a fortnight later the Angling Trust 2021 Division 1 event where 420 anglers lined up. Several of the Let’s Fish coaching team undertook stewarding duties.

We have a diverse coaching team of five males and five females, comprising both adults and young people with various angling experiences and backgrounds.  Four of our coaches have BAME backgrounds.

Sue, our lead level 2 coach is the clubs’ welfare officer. She started coaching in 2008 beginning with the Alliance for Black Children’s holiday club activities at Wellingborough Embankment water park. After twice fishing the ladies national, Sue represented Let’s Fish Yellow in the 2021 Division 2 National, the first BAME female angler to ever do so. 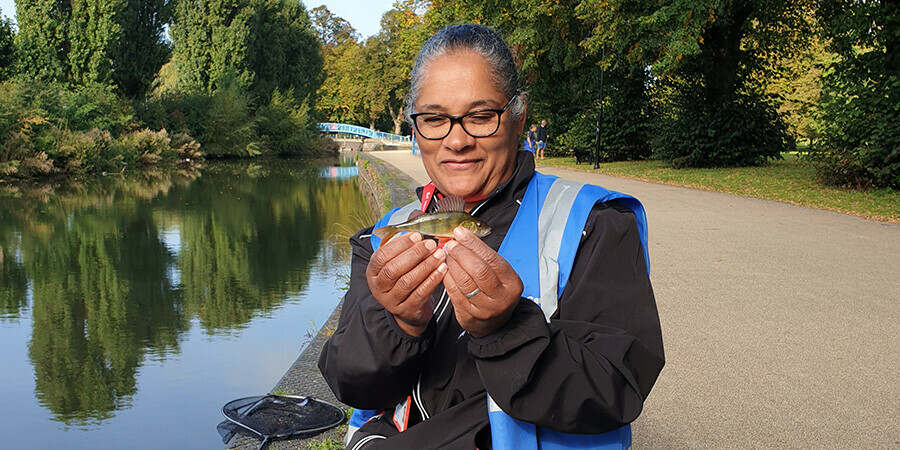 Guy got into coaching after an injury from motor racing. He wanted his six children to have an active outdoor life.  Guy started his journey with the club when he met Sue and the late Mick Dimmock.

Their passion for getting children into fishing and making it fun spurred Guy into wanting to become a coach. If you can’t beat them, join them was wife Kelly’s motto. Kelly adds that, “seeing a child or adult sit there patiently waiting and watching for that float to go under and getting a fish in the net is just magical.”

Paul Douglas (Dougie), is the club’s Head Bailiff and an avid specimen angler. Dougie got into coaching to put something back into the sport.

Our Level One coaches

David, our Deputy Welfare Officer feels that getting involved with the club and then the coaching side has been a major plus for both himself and his two boys. Both lads performed creditably in the 2021 National Celebration of Young People and Fishing.

Andrew began by volunteering and then chose to become a coach to give families those lasting memories that can’t be replicated behind a phone screen or television.

Tamyra is our second youngest level 1 coach.  She began fishing aged four. She started off by volunteering at the welcome desk, then as a sports leader, supporting children and young people with disabilities to learn how to fish. Tammy recently represented the Let’s Fish England Youth ladies. 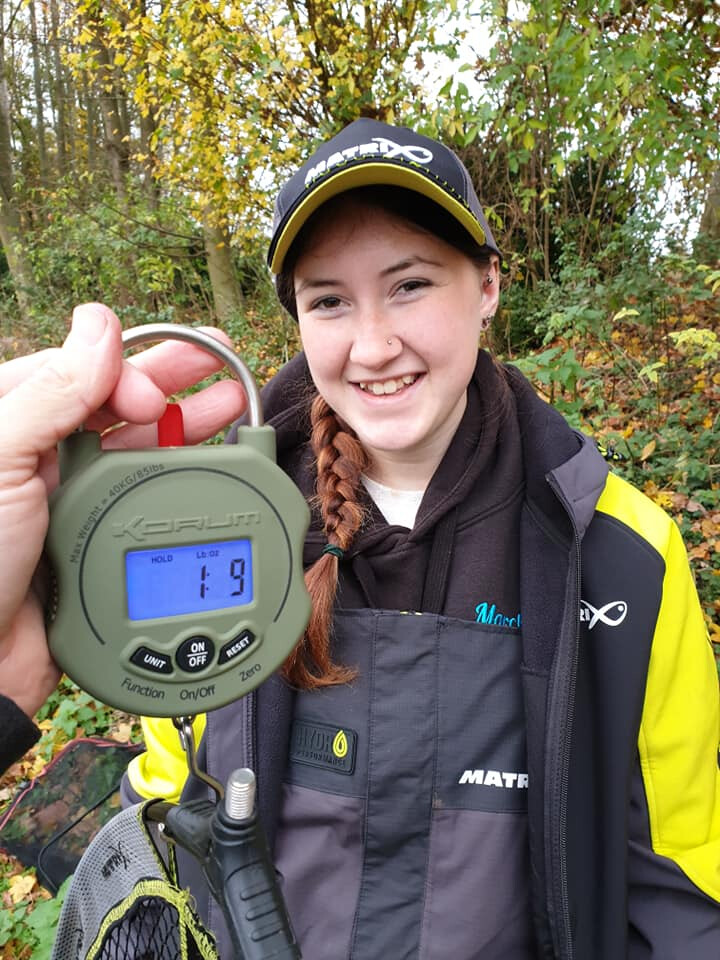 With ambitions to graduate to level 2, Nicole recently represented the Let’s Fish England Youth ladies where she was top points scorer.

Coach David has additional needs and understands how his own confidence has developed through fishing. He enjoys helping other young people to benefit in the same way.

Our coaching work can be broadly split up into Let’s Fish and non-Let’s Fish work. In 2021, our team facilitated 23 Lets Fish events: 21 introductory Let’s Fish events including seven held under the Nenescape banner plus two next level events designed to prepare participants for the national celebration. 347 participants attended these events, most of which were held on local canals. There were fewer no shows when the weather was wet and windy compared to when it was hot and sunny.

I also supported Let’s Fish events in Wolverhampton, Coventry and with John Pope and his team at Hampton. A bit of a trek perhaps, but totally worth it for this is amongst the best ways of acquiring new venue knowledge and coaching tips.

Lottie. The queen of perseverance 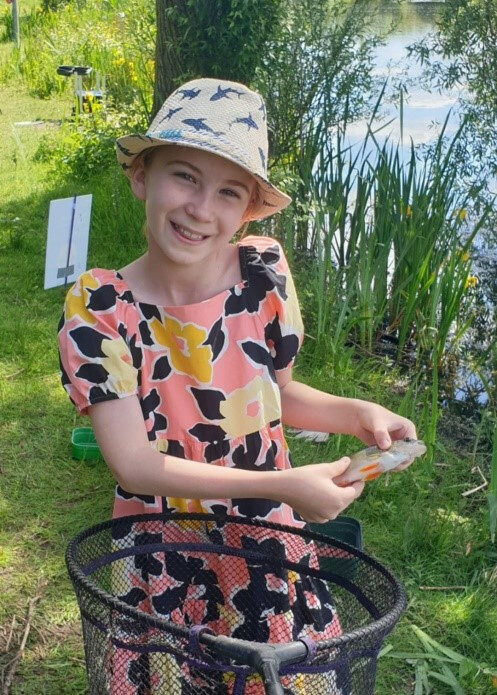 One of my favorite memories from Let’s Fish 2021 was Lottie Clarke, catching a fish at the fourth time of asking, she said,” I’ve held a fish. I can go fishing now’. It was only afterwards that her parents explained that Dad had promised to take her fishing if she caught and held a fish.

I was amazed at her determination to catch that fish and even more thrilled that she continued fishing. Lottie entered the National Celebration of Young People and Fishing finishing 42nd 690g. Soon after, Lottie won the Luton AC autumn cadets match, picking up the girl of the match award for good measure.

Further good news came when Lottie was selected for the Let’s Fish England girls’ cadet team. I’ve got the feeling Lottie could be an angler for life.

Fourteen participants represented the club at this well attended event: six cadets, five juniors and three youth participants. Of these, five came through the 2021 Let’s Fish and the next level events and were in their first season.  Most outstanding performances were Tulisa Marchant who featured in the event video placing 8th in the cadets’ section, Ricky Marchant placed 16th in the junior section and the Mermaids cadets team placing 8th out of 27 teams. Six of our representatives were selected for the 84-peg end of season teams’ event.

Development work outside of Let’s Fish. The Fish-a-Bility Project 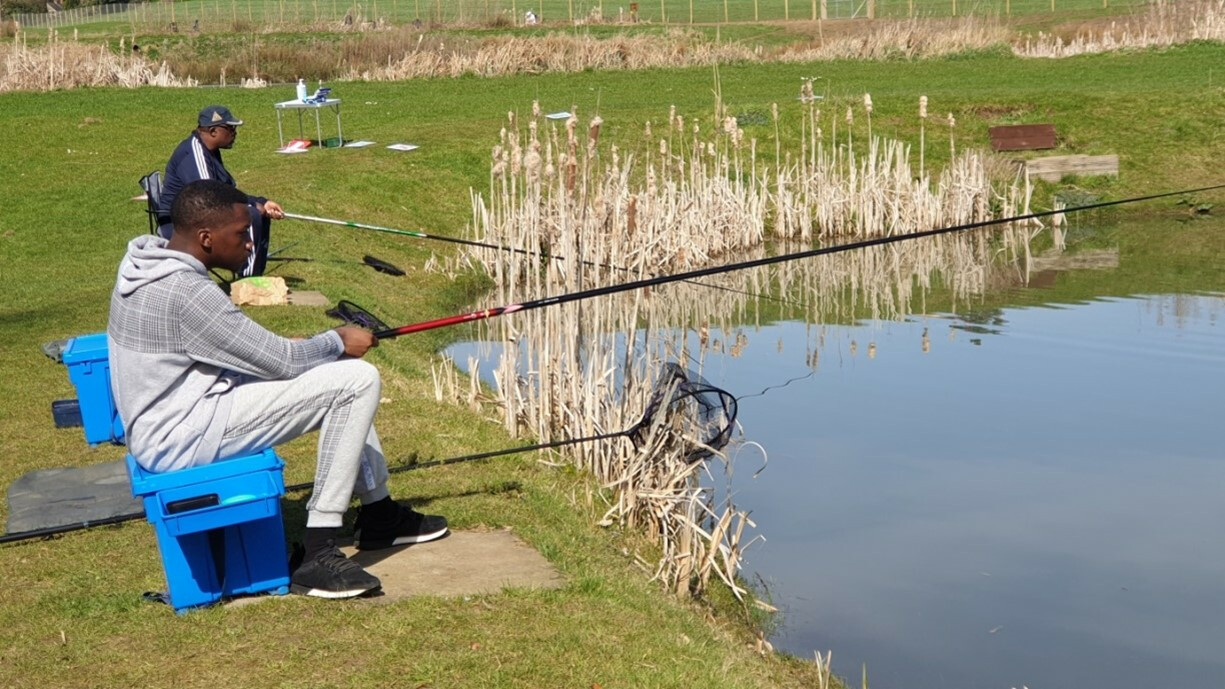 In the spring, in a project supported by the Sport England Tackling Inequalities Fund, we delivered events for children from BAME communities, young people with disabilities, those in isolation and people experiencing mental health issues. Exactly 100 participants, nearly half of whom were female, took part. 54 were trying fishing for the first time and 32 participants, predominantly children and young people had disabilities.

This project was extremely successful as it gave opportunities to access angling activities to those who might never have the opportunity to take part.  It provided an escape from the pressures of lockdown and helped improve the mental wellbeing of participants.

Our club is affiliated to the Northamptonshire Association of Youth Clubs, and this project won the President’s Cup 2021. We will continue to develop on the great work of this project into the future.

The combination of Let’s Fish and our other work has helped our club to attract new junior members as you can see from the graph below.  A bonus is that we have also seen an increase in parents learning to fish, joining the club with whole families fishing together.