The Birmingham & Fazeley Canal links urban and rural landscapes. It begins at Gas Street Basin, in the heart of Birmingham’s shopping and cultural districts, leading out into the green and peaceful Midlands countryside.

In its industrial heyday, the Birmingham & Fazeley Canal was shut away from the city behind high walls. However, in the 1980s, it was reborn as a green haven for locals, with new access points and the towpath resurfaced for walking or careful cycling.

The canal takes you past many central Birmingham landmarks, including the Post Office Tower. The Farmer's Bridge Lock Flight is one of the outstanding sights on Birmingham's canal network. The canal plunges down through dramatically floodlit archways, office undercrofts, and claustrophobic tunnels. It is a truly atmospheric link to the past in the middle of a modern city.

Salford Junction, the waterway interchange in the bowels of Spaghetti Junction, is starkly impressive. At Drayton Bassett, once the home of Sir Robert Peel, there is a curious Gothic footbridge, with little white turrets either side of the canal.

Days out on your local canal

Zoom into the map to find details such as moorings, boaters' facilities and access points. You'll need to zoom in fully to see all the details. Click the red 'i' icon in the bottom right hand corner to expand the key.

...see our stoppages page here and check your route

This scheme started as an attempt by disgruntled Birmingham industrialists, in conjunction with the Trent & Mersey, Coventry and Oxford Canals, to break the monopoly of the Birmingham Canal. They promoted a Bill in Parliament, and the Birmingham Canal retaliated by promoting a virtually identical scheme. Parliament chose the established company and an agreement was then made that the two companies be amalgamated. With John Smeaton as engineer, the canal opened in 1789.

The Digbeth Branch opened in 1799. Its end is joined with the Warwick & Birmingham Canal, the first link in the direct canal route to London. 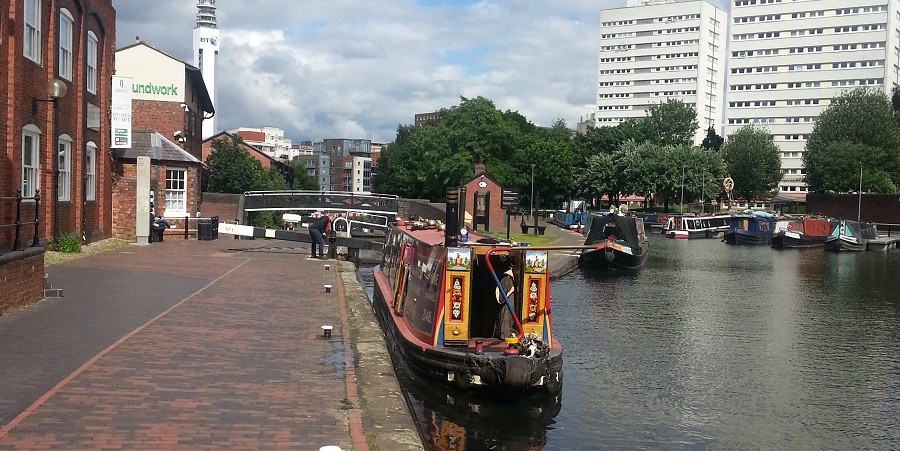 The Farmer’s Bridge Flight became exceedingly busy, kept open day and night, and lit by gas during the hours of darkness. There was said to be ‘nearly 70 steam engines and about 124 wharfs and works seated on the banks of the canal between Farmer’s Bridge and Aston. Because the flight was so hemmed in by property there was no room to duplicate it. This was one of the main reasons leading to the construction of the Tame Valley Canal.

Find out about the latest news, events and the future plans to improve wellbeing in the West Midlands