This is a miniature sculpture trail from Deansgate Railway Viaduct to Lock 87 on Princess Street.

Sumit explains, "Inspired by the traditional use of horses to pull the canal boats laden with produce along the waterway, and Eadweard Muybridge's photographic studies of motion, I will create a series of 22, small, digitally designed, 3D printed horses, which will be hidden along the stretch of Rochdale canal from Deansgate to the Village."

Venessa has used her trade mark colour palette and bold bright patterns to create this incredible floor mural around Lock 89. 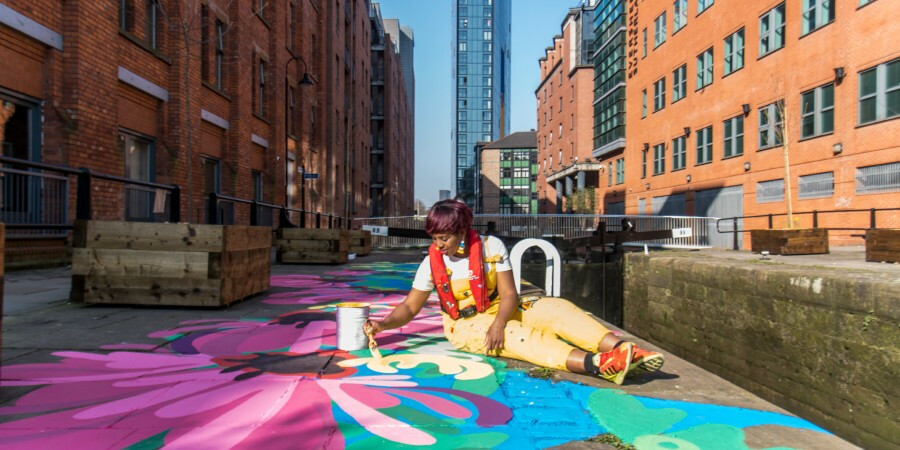 Venessa gives us this brief desciption, "Inspired by the diverse wildlife and wonderful weeds and wildflowers that weave around the edges of the canals and waterways that peek from the bricks and blossom from the drainpipes. I see the plant life as mirroring the city, it displays vibrancy diversity and resilience, and energy around every corner."

Things That Go On Things

Mirror Cave invites the passer-by to take notice of the tunnels and bridges along the canal and take in the graffiti’d tags as art works and expressions of creativity often overlooked. This will be Located at Lock 88.

Disco Curtain is inspired by the Gay Village, togetherness and inclusivity. The piece aims to spark joy and maybe encourage a spot of dancing in the street. Located on the wall of Sackville Gardens opposite Canal Street.

Stuck in the Lock by Ian Douglas

A charming story taken from ‘Folk Tales from the Canal Side’ by Ian Douglas, canal dweller and master story teller. Have a listen to this engaging short yarn while you explore the waterway.

Where can I find the trail?

The trail follows the Rochdale Canal through the heart of Manchester. We recommend starting by the Deansgate Railway Viaduct (access to the towpath is via Castle Street) and then working your way along the trail towards Canal Street.

Please take care on the towpath and be careful near the water.

The trail route is step-free, but some walkway ways are narrow especially under bridges and through tunnels, and there are slopes on the towpath in some places.  There is ramped access on to the towpath near to the Deansgate Railway Viaduct and at Lock 87 (Princess Street). The Disco Curtain can be viewed from Canal Street opposite Sackville Gardens.

The best places for level access from the street on to the towpath are Beaver Street (near Lock 87) and at Lock 92 (Duke’s Lock).

Let us know what you think

We are really keen to hear what you think about the art trail. If you have visited, we would be grateful in you can complete this short evaluation survey.