Spanning the years: a wartime story from Tame Aqueduct.

The Tame Aqueduct is an inconspicuous structure tucked away in the Tame Valley but like many of our waterway gems, it’s a little heritage treasure. Built over 200 years ago, it was the final link in the Coventry Canal and an extensive network of waterways cutting across the Midlands that enabled the industrial revolution to happen. But this is a short story about a more recent addition to the historic waterway.

The canal structures, past and present, the marks of wear and tear, the unsympathetic repairs, the maps, archive records and images all provide historic evidence of the unique story our waterways have to tell. The presence of a World War II pillbox adjacent to Tame Aqueduct adds a dimension of interest linked to more recent, globally significant historical events, and serves to remind us of our military heritage.

Figure 1: the cottage that once stood sentinel by the Tame Aqueduct has gone, as has the foot bridge, circa 1930-1950.(source: accessed online 1/5/2014 http://www.search.staffspasttrack.org.uk).

Figure 2: Tame Aqueduct sits at the edge of this historic 1884 OS map, the cottage still exists but the prospect of the Great War is still distant. (Reproduced with permission of National Scottish Library).

Figure 3: The small additional square on the post war map (circa 1958) marks the location of the pill box on the south-eastern flank of the aqueduct.

Fortification has been integral to the history of warfare across the centuries and continents. Fixed, small defensible strong-points have been built by the Allies and Axis, by colonials and sovereign states across Europe, Asia and Africa. Made of more or less durable materials, sangars, hedgehogs, bunkers or dugouts are all based on the same principles as pill boxes.

After the evacuation of Dunkirk, the invasion of Britain was perceived as a very real and imminent danger. A programme of anti-invasion fixed defences was the inevitable choice; in the 9 months that followed an estimated 18 000 pillboxes were built. Coastal and cross country defence lines ran the length and breadth of Britain creating a network that integrated rivers and waterways with fieldworks and hardened defences. A three tier system joined trenches, minefields, anti-tank and gun emplacements, flame barrages and mobiles forces into a network of boxes that would enable enemy forces to be channelled, contained and ultimately defeated. 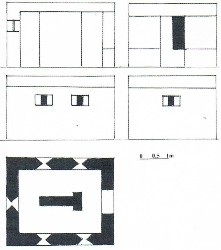 It was part of the Western Command Stop Line No 5 which ran from Tamworth to Burton-on-Trent and thence by River Dove to Ashbourne. It is a rectangular pillbox, with three grooves running around it which would have held lengths of wood to nail planks on to camouflage the pillbox as a canal-side shed. The door is half blocked with a concrete wall and would have been disguised as a two-panelled wooden door with one panel open. It has five embrasures but presently only two are open.

It is now very rare to find any part of Britain's defences other than those composed of concrete. Immediately after the war, there were more pressing matters to attend to than conserving the detritus of battle. For decades afterwards there was never even a suggestion that anything should be deliberately conserved. Erosion, road construction and modern developments have destroyed many defence structures. Those remaining have been camouflaged by decades of neglect and nature.

For a long time little was known about how many pillboxes survived. Interest was stimulated by Henry Wills’ lengthy study of hardened defences. Local, public and professional surveys were carried out culminating in the Defence of Britain Project (1995 to 2002). This and other work led to estimates that close to 28,000 pillboxes were built in the UK of which about 6,500 survive.

Despite the limitations of size and fixed location, some innovative new uses have been found for pill boxes. The more spacious Type 28s are probably the most amenable to reuse as cattle sheds and storage lockers. More imaginative pillbox applications recorded include use as a pub cellar, a ladies toilet and an open-air theatre box office.

Figure 5: side elevation and doorway, previously blocked off to create an artificial bat cave. Vandals have since forced an entry.

From pill box to bat cave

The massive concrete and brick pill box by the Tame Aqueduct was modified in 2000 to create an artificial bat cave. Pillboxes were thought to be a good place to make bat roosts, providing a damp and stable thermal environment. Bat boxes were hung on the internal walls, openings were fully or partially closed off and some internal partitioning put in place. Adjustments also aimed to prevent access by people. Unfortunately it is now evident that vandals re-opened the doorway. The bat boxes remain intact but do not appear to be in use.

Hadfield C. 1981, The Canals of The East Midlands, David and Charles