Some of our nicest canal and river destinations are just a hop, skip and a jump from the busiest motorway junctions. Next time you’re planning a long road trip, why not break up the journey with a rest-stop by the water?

Family by the canal

As lockdown eases and the August bank holiday approaches, many of us are venturing out for day trips and staycations around the country. This summer, ensure the fun starts on day one by packing a picnic, filling and flask and taking a break somewhere beautiful, where birds sing and boats chug by.

A place to pause

Find somewhere beautiful to unwind, enjoy a picnic and a rare moment of calm. Discover what's local to you

We've put together this handy list of relaxing canal locations which are nearby busy roads and motorways. Our list is ordered by motorway (with the exception of the A5) and in numerical order.

Travelling on the A5

A5
Pontcysyllte Aqueduct, North Wales
Although the Pontcysyllte Aqueduct on the Llangollen Canal isn’t near a motorway we've included it here as it is on one of the largest roads in Wales (and it's breathtaking). In 2009 it was declared a world heritage site, giving it equal status to the Sydney Opera House and Great Wall of China. The aqueduct is 1,000 feet long and 125 feet high. Perfect for a mid-journey walk across to stretch your legs.

Travelling on the M1

M1, Junction 15
Stoke Bruerne, Northamptonshire, NN12 7SE
The pretty canal town of Stoke Bruerne is the perfect spot to stretch your legs and relax. If you have an hour or two to spare, The Canal Museum is the prefect retreat from the motorway. Housed in a former corn mill, the museum sits on the Grand Union Canal and gives visitors a real taste of what life would have been like on the canal throughout its history. The Waterside Café at the museum can also offer hungry travellers a bite to eat while they sit back and watch the canal traffic cruise past. 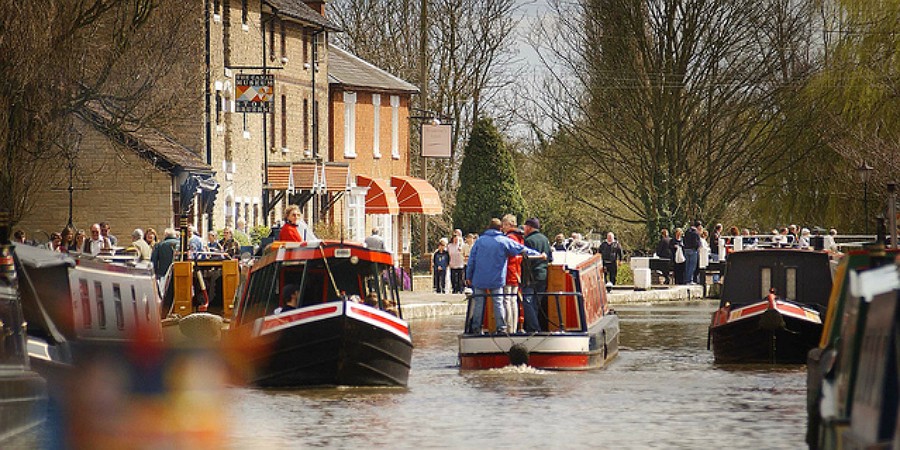 M1, Junction 18
Watford Staircase Flight, Northamptonshire, NN6 7UU
This seven lock flight, which includes four staircase locks with side pounds was opened in 1814 and has been popular with boaters and visitors ever since. A stone’s throw from Watford Gap Services, the Watford Staircase offers you a breath of fresh air in wonderfully green surroundings when you need a break from motorway fumes.

M1, Junction 20
Foxton Locks, Foxton, Leicestershire, LE16 7RA
Foxton Locks on the Grand Union Canal is one of Britain’s foremost canal landmarks with its famous flight of locks and Inclined Plane Boat Lift. A stop-off at the locks will give you a chance to stretch your legs with a walk along the sandy towpath. There's a tearoom and a pub closeby. 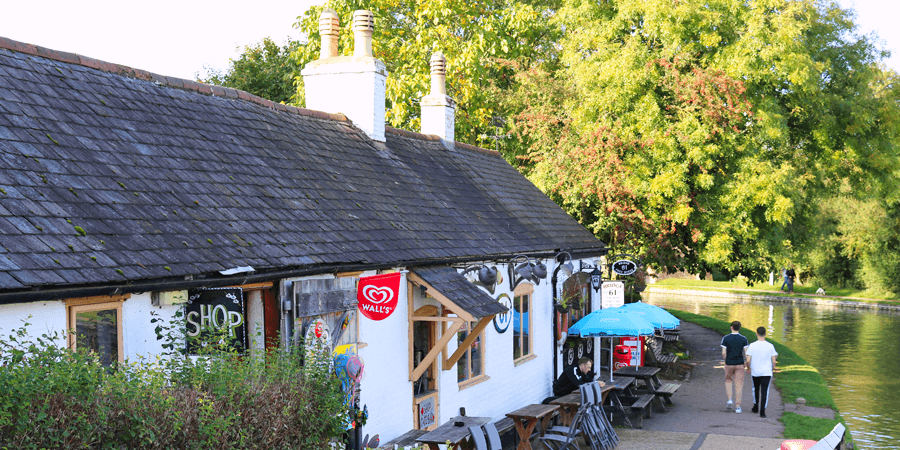 Travelling on the M5

M5, Junctions 18 and 19
Bristol Floating Harbour, Somerset, BS1 4SP
Bristol Floating Docks on the River Avon has developed into one of the country’s most exciting tourist attractions housing galleries, museums and bars. With old warehouses now playing host to contemporary exhibitions and studios, there’s plenty to see and do in a short, or long, stop-off in Bristol.

M5, Junction 24
Somerset Space Walk and Maunsel Locks, North Newton, Somerset, TA7 0DH
This picturesque spot on the Bridgwater & Taunton Canal has a tea shop where you can enjoy some refreshments while watching the narrowboats pass by. If you fancy staying longer, boat trips depart from the canal centre, and it is also a stop on the Somerset Space Walk – a 22km walking route that also forms a scale plan of the solar system, with models of the planets along the way. Maunsel Lock is the location of the sun, and you can go in either direction to see the planets. 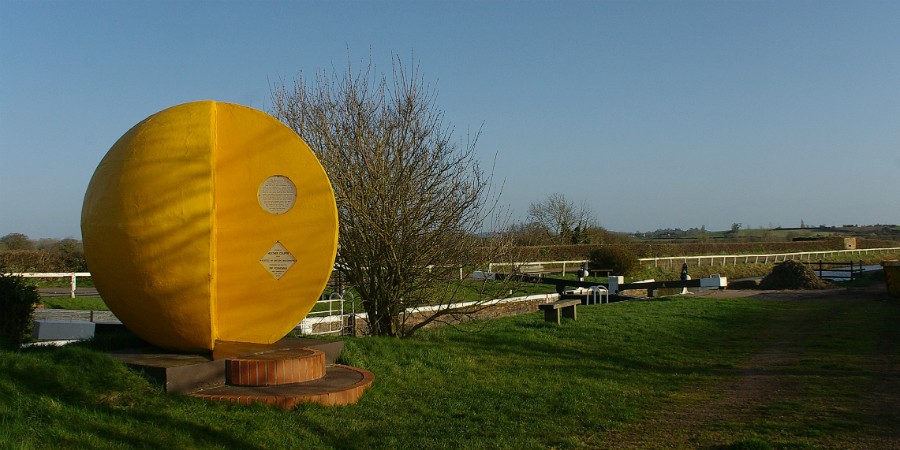 Travelling on the M6

M6, Junction 15
Etruria Industrial Museum, Stoke on Trent, Staffordshire, ST1 4RB
The last steam-powered potters’ mill in Britain offers a family-friendly interactive exhibition, which is a great place to learn about our industrial heritage. If you are lucky, you might arrive on one of the few days of the year when the boiler is lit and the historic mill machinery comes to life, but if not there’s still plenty to see and do. The museum is by the Caldon Canal and the Trent & Mersey Canal.

M6, Junction 19 / M56 Junction 10
Anderton Boat Lift, Northwich, Cheshire, CW9 6FW
Connecting the River Weaver to the Trent & Mersey Canal, the Anderton Boat Lift, built in 1875, raises boats by 50 feet using two water tanks the lift carry boats up and down with a counterbalance system. There’s a visitor centre, café and shop to explore ensuring the lift is a fascinating location to stop for lunch and a wander. 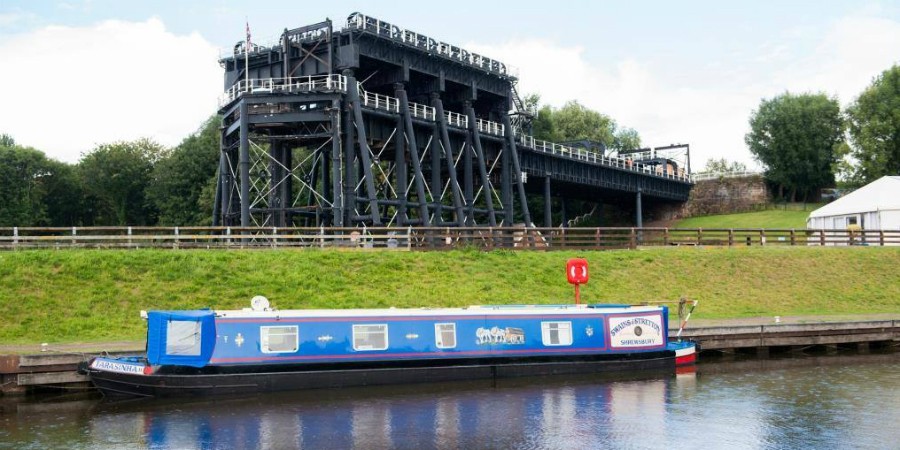 M6, Junction 34
Lune Aqueduct, Lancaster, Lancashire, LA1 3PE
The Lune Aqueduct on the Lancaster Canal is a magnificent place to take a break from driving, have a wander, a picnic and soak up the stunning scenery.

Travelling on the M25

Travelling on the M40

M40, Junction 11
Banbury, Oxfordshire, OX16 5QE
The Banbury Museum on the Oxford Canal combines the town museum with Tooley’s Boatyard, a scheduled ancient monument. Making a detour to the museum will reward visitors with interactive exhibitions and the chance to see historic boats being restored. Alternatively, simply take a stroll around this pretty town and feel the anxieties of your journey mely away. 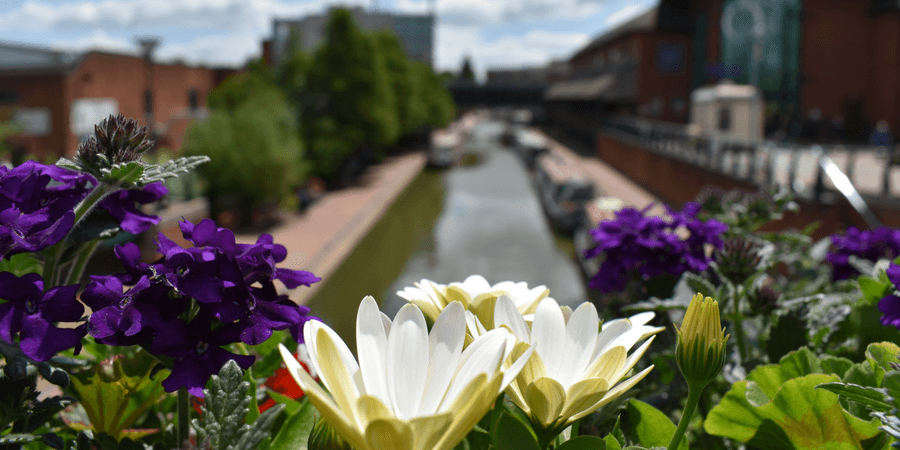 M40, Junction 15
Hatton Lock Flight, Hatton, Warwickshire, CV35 7JL
A steep flight on the Grand Union Canal with 21 locks in just over 3km. hatton Locks Cafe is a lovely spot for lunch, ideally placed for watching narrowboats ascending and descending the flight, and a walk around the area will reveal lots of interesting and historic sights, including the Maintenance Yard and Asylum Wharf.

Travelling on the M42

M42, Junction 1
Tardebigge Lock Flight, Tardebigge, Worcestershire,
At 30 locks, this is the country’s longest flight, raising the Worcester & Birmingham Canal 67m in around 3km. Its rural Worcester location makes it an ideal spot for a walk and a picnic. Close to the top, you can find Tardebigge Engine House, once used to pump water from the nearby reservoir to the top pound, and now a restaurant.

Travelling on the M53

M53, Junction 9
National Waterways Museum, Ellesmere Port, Cheshire
This one’s literally next to the motorway making it a no brainer for a stop-off if you’re in the area. Situated on the Shropshire Union Canal, the National Waterways Museum is a great attraction in any weather with its collection of narrow boats, barges and ice breakers, all housed in Victorian buildings. 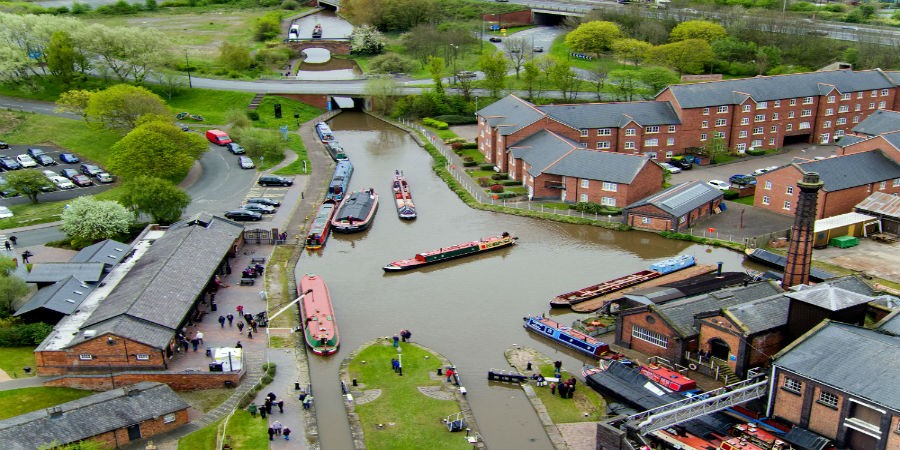 Travelling on the M60

M60, Junction 22
Daisy Nook Country Park, Failsworth, Greater Manchester
The Rochdale Canal runs through this delightful country park. It is so green and peaceful, it is hard to believe it is just a stone’s throw from the M60. With woodlands, walking paths and picnic sites, it is a great place to go for a breath of fresh air, and maybe spot some wildlife.

Travelling on the M62

M62, Junction 23
Standedge Tunnel, Marsden, Yorkshire
Stopping off at Standedge Tunnel on the Huddersfield Narrow Canal is a great way to break up your journey. Take a boat trip on a glass boat into the longest, deepest and highest canal tunnel in the country, or take a walk over the top of the tunnel, feel the wind in your hair and forget all about the traffic on the motorway. There’s a visitor centre by the entrance and a café offering light snacks and drinks.

M62, Junction 26
Bingley Five Rise, Bingley, Yorkshire
Bingley Five Rise on the Leeds & Liverpool Canal is a popular tourist attraction in Yorkshire with crowds often gathering at weekends to watch boats make their way up or down the 18th century lock flight. As Bingley Five Rise is a staircase flight (the lower gate of one flight forms the upper flight of another) it can take up to 90 minutes for a boat to work its way through. With a café and shop onsite, the rise makes an interesting and attractive stop off if you’re in the area. 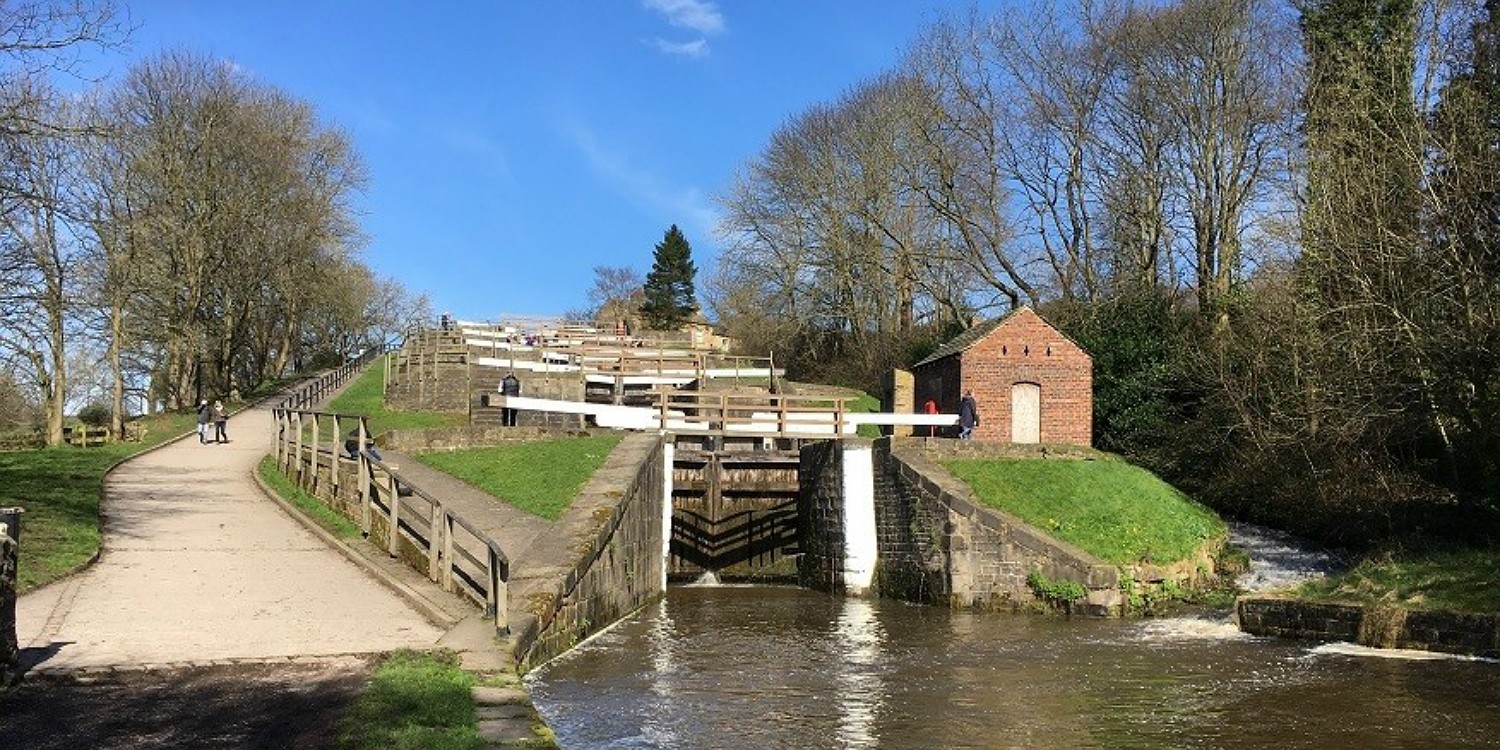