Modern steel engineering structures on canals are not usually viewed as heritage. But some are deserving of a second look. One such is, or rather was, Thurlwood Steel Lock, which was built in the late 1950s to replace one of the paired locks on the Trent & Mersey that was failing due to subsidence caused by brine pumping.

Thurlwood was an experimental, naked steel lock that could be jacked up when further subsidence occurred. It might have been modern, but it was very much in the functional tradition; it had impressive guillotine gates, visible culvert tubes and loads of metal steps and railings. Strung with bunting, it opened in 1958, but it was unreliable, often out of use and took longer to fill than the original lock. Boaters tended to avoid it and its maintenance was shamefully neglected. 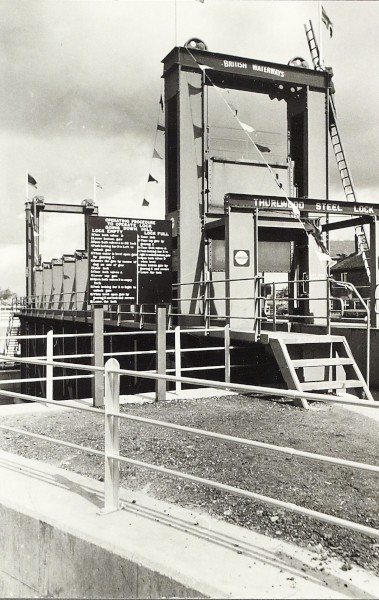 Thurlwood Steel Lock would have had a 60 year design life and with proper maintenance could have lasted for over 100 years. Had it survived it would certainly have become a listed building.

Instead, in 1988 it was demolished and cut up for scrap; a sad end for an intriguing ‘age of austerity’ lock made of metal. Especially when you think of Thomas Telford’s Beeston Iron Lock; a scheduled monument that is still in everyday use after 187 years.