It is unseen (most of the time) and unsung, but puddle clay is the essential waterproof lining material for our historic canals. Without it, there would have been no water in them.

Not long ago, British Waterways still operated a handful of clay pits but they have all now closed. Nevertheless, a certain mystique still surrounds the subject.

James Brindley, whose birthday was 300 years ago this year, is popularly credited with inventing the use of puddle clay, but of course it’s impossible now to be sure. John Farey’s great encyclopaedic article on Canals, published in 1816, is sceptical on that point but does admit that the Bridgewater Canal probably saw the first use of puddle clay in England.

In his article, Farey goes on to describe how a canal was lined with the material and it did not involve the use of herds of cattle or sheep, quaint as those stories are. It was all down to manpower. Basically, barrow-loads of clay or dense loam were dumped into the canal channel, mixed with water, chopped with spades and trampled by labourers wearing, according to Farey, ‘a stout pair of puddling boots, that will keep out water’. The clay was built up in layers, up to three feet thick on the bed of a canal and it was also applied to the towpath and offside banks to prevent leakage.

Nowadays there are newer methods of waterproofing canals, although many still involve clay products. But whether Brindley first thought of it or not, it was a good idea. 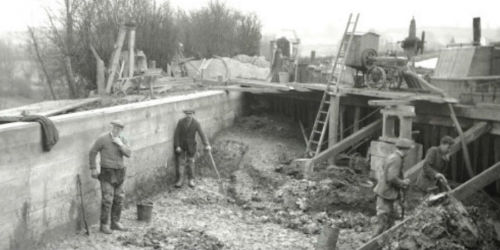