Where can I fish for free?

If access to the towpath for the general public is free, surely you can fish from it without payment too? Well, no. And here’s why…

It’s all about the fishing rights for the water itself.

What exactly are fishing rights?

Fishing rights are legal property. The owner of river, canal or reservoir (Stillwater) bed is assumed to own the fishing rights above the bed of the fishery.

But it's not really that simple. Ownership of fishing rights in the water can be separated from the ownership of the land. Some of these ‘incorporeal fishing rights’ even exist on our canals, although they are much more common on rivers where in the past clubs have bought fishing rights from farmers or local landowners.

Where can the public fish for free?

In the strict legal sense, the public only has a right to fish for free in the officially recognised fully tidal parts of rivers and in the sea, except where an individual owns a private right of fishery.

So, while the fishing might be free, you need to be aware that you don’t necessarily have a right to access the estuary or the shoreline – the landowners are quite within their rights to charge an access fee to access their land the fishery. Although, in theory, you could get access by boat.

By law (since 1882) no public fishery can exist in waters that are not tidal. Even where a public right of navigation exists, this doesn’t give you the right to fish. So, in inland fisheries, the fishing rights are owned by someone. Some owners might choose to allow the public to fish free of charge or, for a variety of reasons, choose to take no actions against people fishing in their waters. 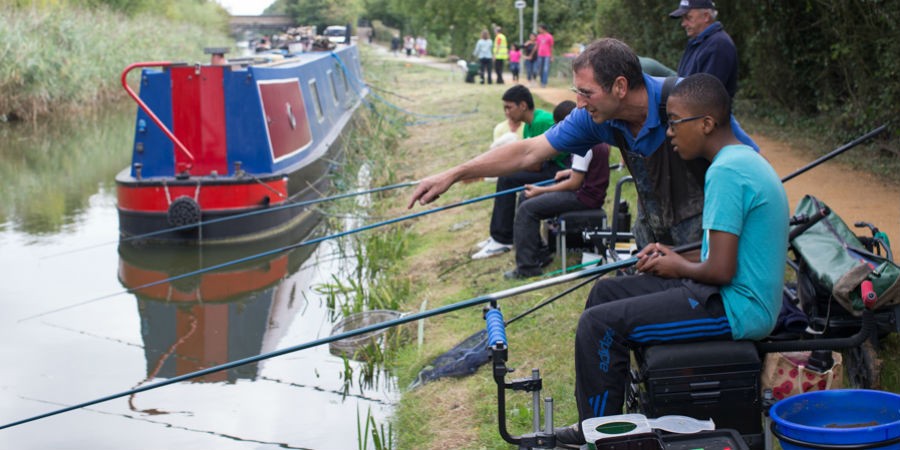 Fishing rights on canals are privately owned – mostly by the Canal & River Trust since we own most of the canals in England & Wales.

So, if you were reading this, hoping to be able to fish without payment on a canal, then we’ll have to disappoint you - there is no such thing as free fishing on the canals. You’ll need a permit. Either:

You can find which clubs controls which stretch of canal using our Find a Fishery search.

The same rules apply if you want to fish from your boat, as your navigation licence does not give you any right of fishing.

The theft of fishing rights

Fishing without the permission of the owner of the fishing rights is, in fact, theft.

The Theft Act of 1968 states: ‘an offence is committed when a person unlawfully takes or destroys, or attempts to take or destroy, any fish in water which is private property or in which there is any private right of fishery.'

The ‘taking of fish’ to include temporarily holding them in a keepnet and later returning them to the water. In other words, you don’t have to physically steal the fish to commit an offence; the stealing of the fishing rights is also in itself an offence. (An analogy might be playing a round of golf without paying the requisite fee to the owner of the golf course, which – in case you were thinking of chancing it – is also an offence.)

But doesn’t a rod licence give me to right to fish anywhere?

To fish anywhere with rod and line on inland fisheries, including in the pond in your back garden or even in a large fish tank in your front room, you’ll need a rod licence. It’s known as a ‘hypothecated tax’ used by the fisheries regulator, the Environment Agency (EA), to maintain improve and develop fisheries. And it’s the EA from whom you need to buy your rod licence.

You need one to fish everywhere but it entitles you to fish nowhere. Or almost nowhere, there are a few EA fisheries that are available to rod licence holders without further payment. See the Angling Trust Fishing Info pages for details of these.

What if I get caught without a rod licence?

If you are caught by an Environment Agency Fisheries Bailiff or a police officer, and are found guilty by a magistrate, then you’ll get a fine (under Section 27(1)(a) of the Salmon & Freshwater Fisheries Act, 1975) which can be up to £2,500!

Do I need a rod licence to fish in tidal water?

You will probably need to show the fisheries enforcement officer that you are targeting a certain species and not just fishing for whatever you can catch. And, you must also observe the close-season for your target species.

So now you know - you can't fish for free on our waterways...

But take heart, because your permit fees go towards us, the fisheries and angling team at the Canal & River Trust, the charity that cares for over 2,000 miles of canal and rivers, being able to keep fish stocks healthy, diverse and secure for plenty more fishing in the future.

You can fish for free at one of our many Let's Fish taster sessions this year. Kids big and small can come along and learn to fish. Or brush up on lost skills and get back into fishing thanks to our level 2 professional coaches and partner angling clubs.

Places are filling up fast for our family Let's Fish! taster events around the country - find your nearest event here