My favourite peg is on the Calder & Hebble Navigation at Calder Grove, Wakefield. It’s the second peg down on the field side just below the road bridge at the Navigation Inn. 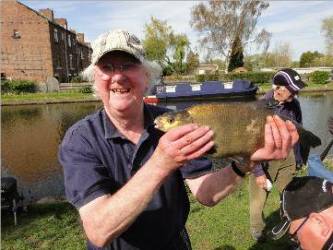 Greatest angling achievement: being chairman of Wakefield Angling Club for the last 45 years and helping the club grow from 200 members to over a thousand members and increase the club's assets from £350 to around £400,000 at present

Angling hero: Mr Richard Clegg MBE. whom I appointed as England Freshwater Angling Team Manager many years ago for the success he has achieved with the England Team

"That’s the unpredictability of canals for you."

This peg is where I had my best ever catch of fish on a canal and my last canal match win on 10 April 2011. The catch was a mixed bag of roach, perch and bream and weighed 45lbs, with the largest bream weighing in at around three and a half pounds.

The peg is just where the canal widens out and usually has a boat moored opposite on the towpath side. The peg is about 30 yards down the canal from the road where I park the car and because it’s on the farmer’s field side there are no problems with walkers, dogs or bikes.

The catch was taken on the pole. I fished down the track using 7 sections of pole at around 7 ft deep, At the off, I introduced a small amount of canal mix groundbait. Chopped worm and casters were added using a pole cup. Soon small perch and roach were coming to hand quite quickly. I was using red maggot on a size 18 hook to a 0.10 hook length and after about an hour a change to a small piece of worm proved to be successful. The plan was to try and catch bigger perch on this bait but to my surprise it was the bream that responded. Regular topping up with chopped worm kept the bream coming and even a switch to a pellet on the hook proved a winner. A few bream had shown in the area on previous occasions but never as many as my catch that day. That’s the unpredictability of canals for you.

The venue can be fished by obtaining membership of Wakefield Angling Club. There no day tickets issued on this section. There are several good pubs and cafes in the area and only 2 minutes from exit 39 off the M1.