Angling hero: Bob Nudd as he was my hero when I was coming through the ranks.

"I have fished 34 different canals all over the country and have caught double weights off 22 of them, so that shows the great potential of the British canals."

I have been fishing canals for over 30 years, and have seen many great catches. I keep a record of all my matches, catches and venue PB’s. I have fished 34 different canals all over the country and have caught double weights off 22 of them, so that shows the great potential of the British canals. Using the right methods, great catches are possible for many anglers. 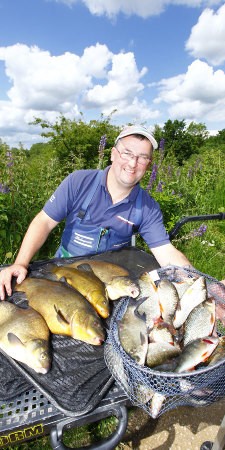 I like this stretch as there is a big variety of fish species present; tench, bream, roach, rudd, perch, carp, pike and chub are all found and you never know what the next bite will be. Also there are lots of my favourite species of fish there - the tench. Many are around the 4-6lb mark which give you a very good fight. Also the venue is set in a nice comfortable surrounding, lots of wildlife and it’s very peaceful. There is a wide towpath giving plenty of room to set your fishing gear out but also leaving plenty of room for passers-by.

Lots of wildlife and very peaceful

The canal at Clayhangers is about 18 meters wide. I fish the pole at 13 meters fishing two lines, one to the left and one to the right. The depth is fairly deep for a typical canal at around 6 foot. As I am to catch bigger fish, strong commercial carp style tackle is a must. With this in mind, I set up just two rigs which are made up with identical 4x14 pole stick style floats but any float around that size will do.

I will fish one line with chopped dendrobaena worms and casters. Typically I introduce about 30 worms to start with, chopped into fine bits, and fishing either half of dendrabena worm, lob tail or double caster on the hook. I would hope to catch the tench on this line. But it’s always good to have several different baits handy as you never know what they will prefer on the day.

On the second line, I would feed three big balls of groundbait with dead red maggot and casters added to the mix. I would hope to catch bream on this one. I would lose feed casters or maggots dozen or so every five minutes over both lines.

Surprisingly, no angling club currently lease these fishing rights and thus and it’s available for anyone to fish on the Canal & River Trust Waterway Wanderers annual permit.