A tale of two Potters

Angelina and Elliot’s fishing adventure started on June 1, 2021, when they attended their first Let’s Fish! introductory event held on the Trent & Mersey Canal at Middleport. The story of their amazing progress to date is brought to you by a grateful mum.

A tale of two potters

Can we try fishing please?

Both children had always shown great interest in fishing, but we never previously had a chance to develop it into something more solid. It was the Let’s Fish! programme that really opened the doors for us. Thank goodness for our local Let’s Fish! coaching team associated with the Stoke on Trent Angling Society (SOTAS). The help, encouragement, praise and technical fishing skills they have passed on to Angelina and Elliot has played a significant role in bringing out the best aspirations of these two budding young anglers. 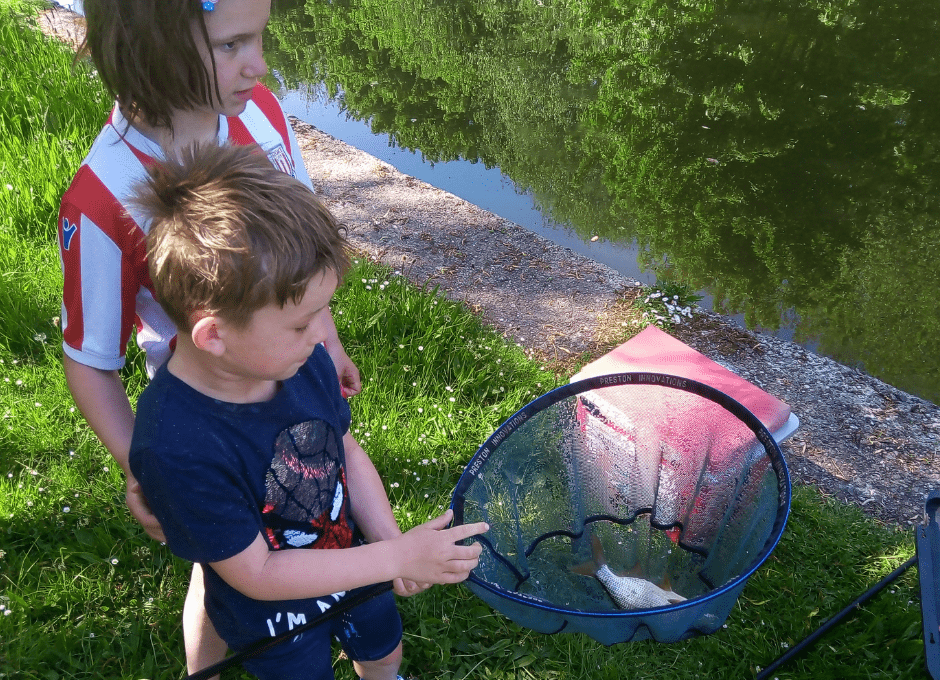 After attending a couple of Let’s Fish! introductory sessions, we took the plunge and bought our first basic starter kits. As a family, we have enjoyed visiting some of the local lakes as well as the canal. We all enjoyed catching fish, working out which fish species is which, playing with big maggots and pinkies learning how to use a disgorger properly etc. The patience, concentration and attention to detail shown by two little people, whilst waiting for fish to bite has been immaculate.

Dubbed the London marathon of young people’s fishing, the occasion has been designed by the Let’s Fish! coaches to be suitable for all standards of young budding fisherfolk, including first timers like us.

Encouraged by John Davey and the other coaches, both children were selected by SOTAS to be team members in the cadet section (7 to 10 years). The children were elated at being part of a team eager to apply their new skills in this partly competitive situation too and so took little persuading to say yes to attendance.

As siblings, they were allowed to fish at adjacent spots to each other which made organisation and looking after them on the day nice and straightforward. I have to say that the wonderful team of Let’s Fish! organisers did a fantastic job of arranging the venues and dates so that dozens of families just like us get to enjoy the day out in glorious Staffordshire countryside. Everyone present that we spoke to felt supported and looked after thanks to the skills and a lot of demanding work put in by many people into this amazing national event. 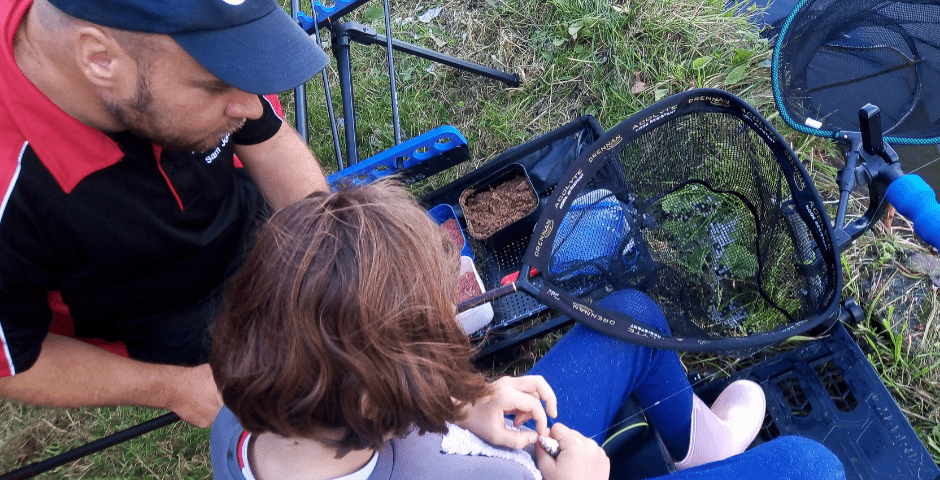 Once the two of them were allowed to start fishing at noon, they both got their ‘concentration heads’ on and fully focused on the float tip. Also making sure they kept feeding just a few pinkies at regular intervals and that the float moved over where they had put their groundbait as taught by the SOTAS coaches and backed up in the Simon Mottram video.

After a few minutes, the bites came steadily and pleasingly both managed to land gudgeon, securing the prized mug in the process. I dread to think of the trouble that could have ensued if one of them had missed out. It would have been gudgeon mug wars for sure.

The three hours fishing time flew by. The Reuben Heaton scales arrived and Elliot was the very first to be weighed in, recording 800g, just brilliant from the seven year old fellow. Next up was Angelina who placed an impressive 1kg 130g on the scales, just 30g more than the boy at the next peg, who turned out to be Simon Preece’s son Blake. Both Angelina and Elliot then proceeded to follow the weigh-in team for fifty pegs, such was their enthusiasm for the day’s events and just wanting to see what each person had caught.

Happily, everyone had caught quite a few fish, although it should be noted that you win more or less the same prizes at the celebration whatever you happen to catch for participation and fun are far more important than winning.

The event headquarters was a hive of activity as we arrived back there, with happy, smiley kids and parents waiting for the all-important results and prize presentation ceremony to begin. Every participant had their names read out in reverse order, and first up was the smiling Elliot in 28th spot. Angelina was named in 16th place for which they both received an event medal and certificate from the charming Angling Trust chairman, George Stephenson.

The results ceremony ended with the team placings, and Elliot’s team had finished a very pleasing 11th out of 27.  Having heard the weights and assessing the situation, SOTAS manager John Davey was now anxiously hoping for a top five finish for the team comprising Angelina, Nathan and Regan and the prospects of a team medal. When the third place and runners-up team (featuring young Maxx an amazing eight-year-old) was read out and no mention of us, it meant either we had somehow secured enough points to win or there had been some sort of computer glitch.

Happily, it was the former, for the SOTAS cadets were read out as the 2021 national cadet champions. It was amazing and utterly unexpectedly, for we have to remember that Angelina hadn’t even begun fishing just four months previously. 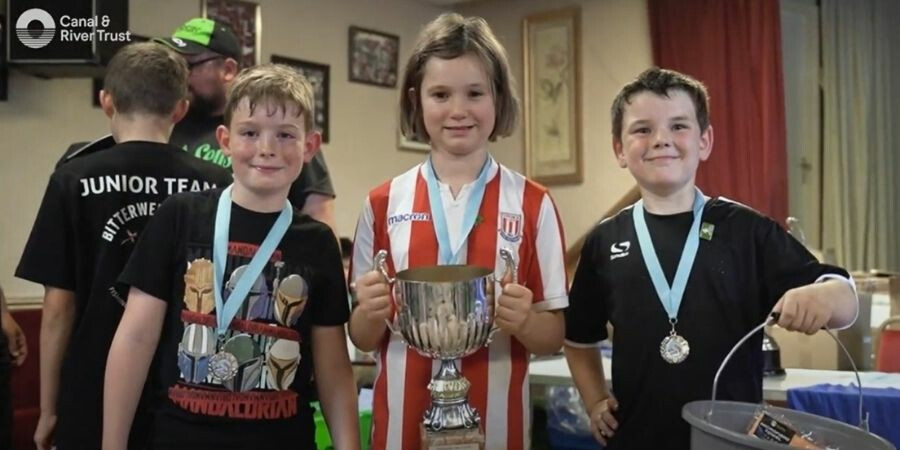 Our second competition of 2021 was a SOTAS academy held at a local lake and there were some impressive huge carp caught by participants! Despite a heavy rain, everyone enjoyed their time and were later rewarded with special prizes too. SOTAS run several events like these, and we plan to attend more in 2022.

In preparation for the 2022 Commonwealth Games junior angling events the Let’s Fish! team arranged a friendly end of year event with an international feel involving young people from across the border in Wales. The event took place in late October on the Shropshire Union Canal. Three of the SOTAS squad were invited back to be part of the Let’s Fish! England silver cadet team, a great honour for our growing club.

The day went well for Angelina, despite not catching as much as in September, she ended up halfway in her section. She learnt some useful techniques and enjoyed another invaluable fishing experience. We’ve gleaned that there is so much to learn about in fishing. I was impressed by her tenacity despite the weather and the challenging nature of the fishing. 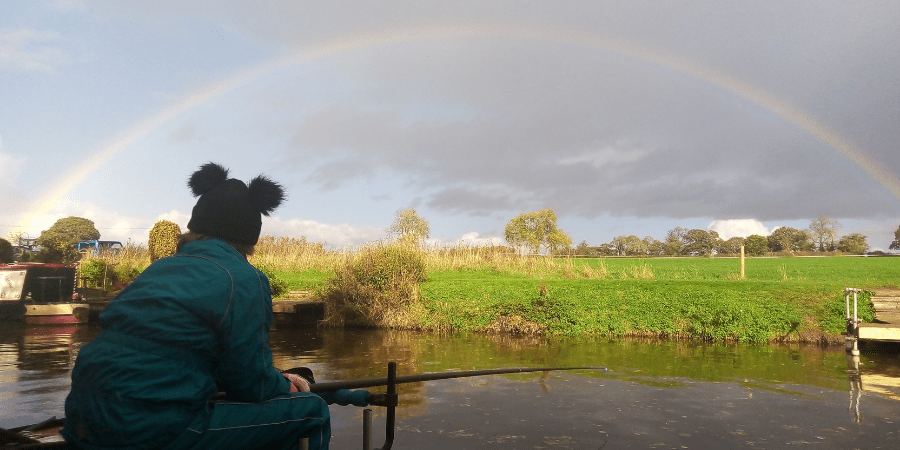 Talking of the weather, we had cold blustery showers followed by the appearance of the beautiful rainbow over the fields! Elliot loved supporting his sister and cheering her up when the fish had stopped biting. Both children are looking forward to the new 2022 season, the new experiences, memories created and having a lot of fun in the process.

If you would like the same opportunity, visit the Let’s Fish! page to find out how you can get involved in fishing. Who knows, we might be fishing near you at the national celebration.