Back in the summer of 2021, we had a message from Kerri, whose young son Maxx, then aged seven supports her as a carer. It turned out that the young fellow had long dreamed of going fishing and Let’s Fish was asked if we were able to help. This is Maxx’s story, brought to us by a grateful mum.

Maxx has been a young carer for me since he could first walk. He helps put my socks and shoes on, passes my medical equipment and medication. He also undertakes various daily chores to help out the family like using the washing machine, washing up, feeding the dogs and so much more. Of course, my husband plays his part but when he’s away from home working, it’s Maxx that I rely on.

Maxx wanted to go fishing since he was around five years old. One day we saw an advert on Facebook for free children's fishing lessons. Unfortunately, all the slots on that event had already been taken. More in hope than expectation, I sent a message to Let’s Fish asking to put Maxx’s name down for any upcoming events. Little did we know Maxx would be getting his very own lesson; just him and the level 2 Let’s Fish coach, Wybunbury Angling Club’s Andy Fairclough.

On the day, Daddy wrapped him up warm and set off for the fishing spot on the Shropshire Union near Nantwich. Maxx arrived and met Andy and was so excited to be able to get started. Andy was brilliant with him, explaining everything and Maxx dived right in! Maxx was able to try everything himself and Andy was very supportive in allowing Maxx to try things himself. Come the end of the afternoon and over 50 fish had been landed. Maxx was naturally sad to have to head off home at the end of the session but was equally excited at the prospect of going fishing again. He wanted us to book it that very second!

Courtesy of the generosity of both Dave’s of Middlewich, and Andy’s own Wybunbury club, Andy also presented Maxx with some fishing tackle including a brilliant seatbox complete with Maxx’s name. Maxx at first didn't realise the equipment was for him. He was in disbelief that he could take it home and keep it. When he woke up the next morning, he demanded Daddy get it out of the car and put it into his bedroom so he could check it was still there, I think to confirm in his own mind that the events of yesterday had really happened. 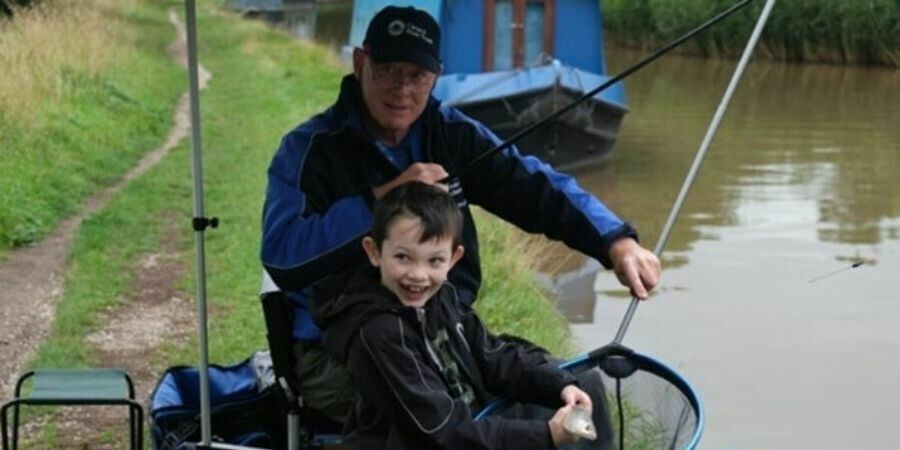 Maxx has family in Cornwall as well as in Cheshire. That evening and over the next few days he excitedly video called all his grandparents to tell them all about his fishing day and to show them his new equipment naming the various items; pole, float, plummets, hooks, shots, disgorger etc as he went. Luckily there were no live maggots or worms to showcase. I might have had to draw the line at that.

Sadly, Grandma Anita passed away from cancer just before the national celebration. She’d have been so proud of him as she and grandad both used to take him rock pooling on Cornwall’s beaches. They even went crabbing once too. Anita knew how much Maxx enjoyed being by water and how much he wanted to go 'real' fishing. Watching the national celebration on Facebook Live brought a tear to grandad’s eye knowing that Maxx’s guardian angel grandma would be so happy.

The weekend after Daddy took Maxx and his new fishing equipment to the canal and had some great bonding time. Maxx loved every second and again he just didn’t want to leave! Then we arranged to meet Andy again as Maxx had asked if he could fish with him again. Andy was again amazing and this time Maxx took daddy and Pops (grandad) to watch him as he was so proud to show off his new skills! Then daddy managed to take him one more time to a different canal ahead of the upcoming national celebration. 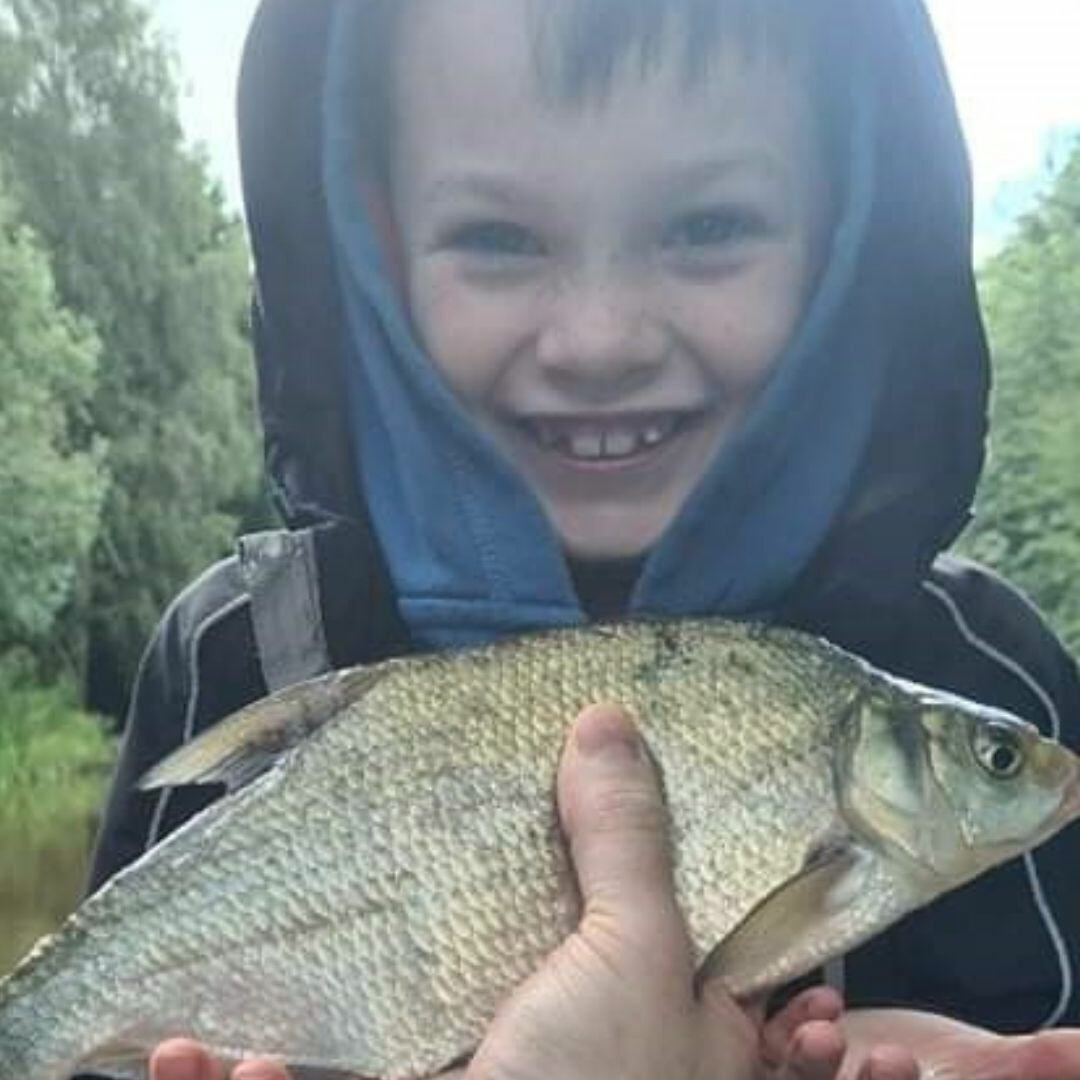 Deciding to take part in the national fishing celebration

We saw an advert about this event and wondered just how serious it all might be. I sent a quick message over to the Let’s Fish team and was reassured it was first and foremost a fun event, especially at cadet and junior level with some prizes and awards thrown in. It was designed to be most people’s first time fishing in a group situation. We were also reassured that there would be Let’s Fish coaches present to help out for those who needed it.

Armed with this useful and reassuring information, which all turned out to be accurate, we decided to ask Maxx if he would like to take part. Although Maxx had little fishing experience having been just four times, he definitely made up for it with his enthusiasm! He didn’t look upon the day as anything to do with serious competition; he saw it as a fun day out to meet a whole load more kids who also like fishing! He wasn’t worried about practice for the competition nor did he fret about how serious it all might be. He just fancied his chances at earning some small awards, particularly the gudgeon mug and the Percy the perch badge. That was his measure of success.

On the morning of the celebration, he jumped out of bed before dawn to wake us up. He was very thorough about checking his equipment and making sure everything was packed into the car. He was that excited he almost forgot to take his snacks and lunch!

At his insistence, Maxx and Dad arrived at the competition a little too early; that's just how eager he was! He managed to spot Andy and meet some other helpers and enjoyed chatting before the announcement was made to make your way along the towpath to the allocated peg and set up your equipment. We did have to borrow a keepnet but that was easy to sort out in advance with the Let’s Fish coaches. Maxx soon set up his equipment and was desperate to get started. The starting whistle could not arrive quickly enough.

The clock finally struck noon on that sunny Saturday and the all-in sounded. He sat there at the edge of the water and did everything himself. He only needed help with unhooking the occasional fish using a disgorger to ensure they did not come to any harm. He almost lost one because it was jumping around in Daddy's hands! But Maxx took control, putting Daddy right and making sure he got that fish safely into the keepnet! That’s leadership for you.

Maxx loved keeping count of the number of fish landed. There were some special prizes if you caught a certain species of fish or a number of fish so no matter what, every child was going to go home with something!

Maxx was so proud when he realised he’d won his first prize. It was the mug for landing a gudgeon a species which a passing Let’s Fish coach said was still reasonably common on the Shropshire Union but getting rarer in some other places. A stripey perch soon followed, earning Maxx a special perch badge. After that, he just kept smashing these challenges out of the park.

The rig carefully placed in, followed by two or three pinkies and magically, the fishing float kept going under. Fish followed fish. A couple needed the use of a landing net, including one decent sized perch amazingly landed live on Facebook. What were the chances of that? That was a heart stopping moment for those of us watching live on Facebook. It seemed to take an eternity to subdue that hard fighting stripey fellow and get him into the landing net. Both the veteran commentator and Andy had a tear in their eyes.

At the end of the three hour celebration, his net of fish was removed by steward Neil. One kilo, 50 grams, came the call from Simon Mottram on the scales. Maxx stood there ever so proud of his achievement! You could see the joy and pride just beaming out of him when the camera zoomed round!

He was so pleased to tell the commentator what he was up to and what he had caught. He knew his whole family were watching live back at home too. That catch earned him 18th place out of the 69 cadet participants. What was amazing is that every one of them had caught quite a few fish and all went home with prizes and lifelong memories.

Maxx’s fishing ambitions for the future

If Maxx had his way, I think he would go fishing every single day. Unfortunately he hasn't been since the celebration as my health has just got in the way plus the inclement weather hasn't made it easy to get out. He often asks can we go after school? Can we go this weekend? Please, please, please?

After recently getting over Covid, Daddy is hoping to take him back to the canal as soon as we have a little milder weather. That’s not because Maxx wouldn't go when it’s freezing cold, because he would, it’s my husband who doesn’t much fancy it, but best we keep that secret to ourselves.

A lot more fishing trips are planned for the summer. Maxx dreams of becoming really good at fishing so he can makes it onto the telly one day. He says he would like to do it with Andy by his side as he is so much better at fishing than Daddy, but that it’s still OK for Daddy and Pops to be there as spectators. 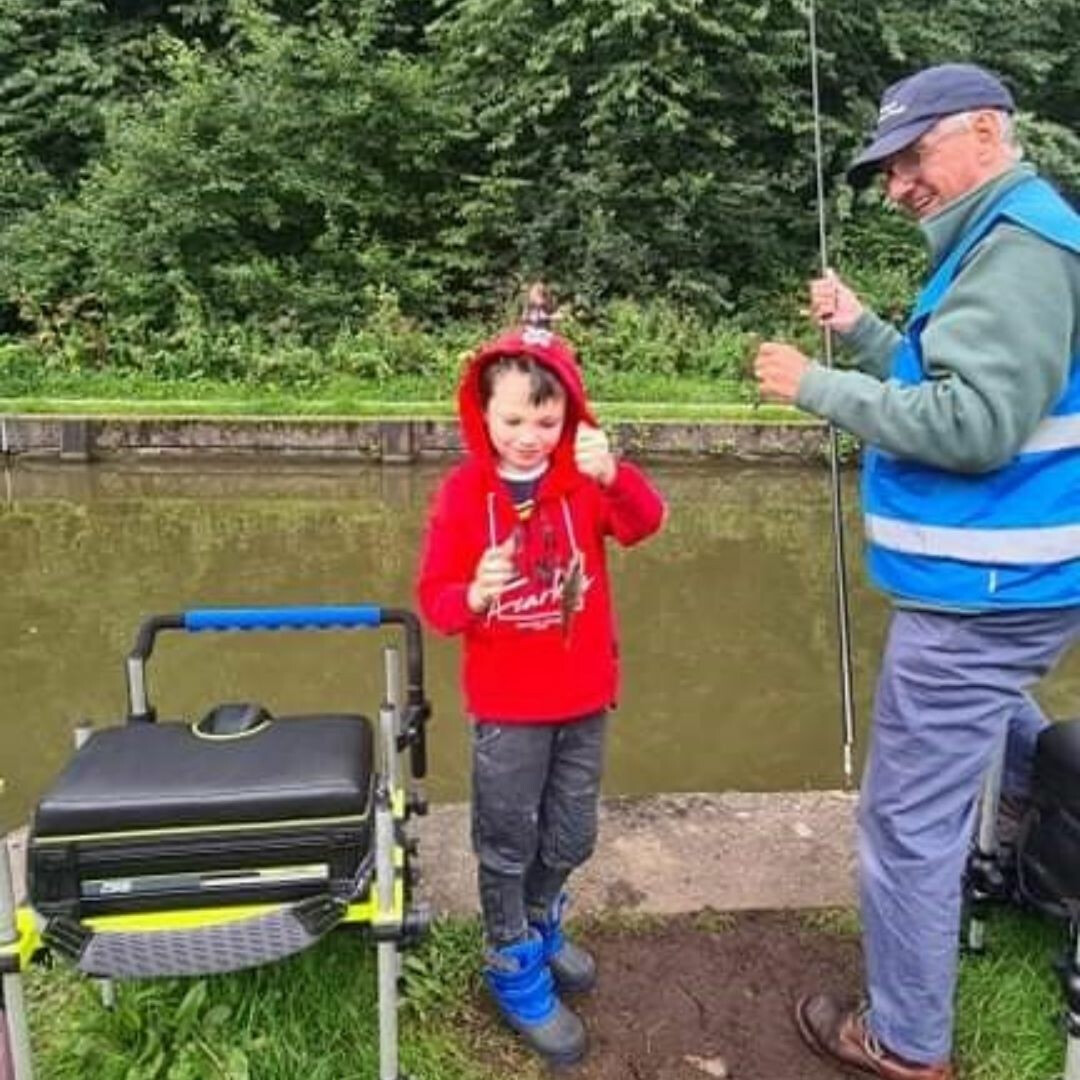 For his birthday and Xmas, all Maxx wanted was fishing related things! From an angling club membership card to various items of equipment. All of a sudden there was no talk of toys or gadgets with screens, just fishing things! We’ve a trip to Dave’s of Middlewich tackle shop coming up soon to invest his Christmas money.

Fishing really has given our little man something for himself. It’s a great skilled hobby to have, it's peaceful, it takes place outdoors in the open air, and it’s the best way to spend time just father and son. Maxx has been talking about it so much that his friends from school want to go fishing now too I think Daddy may have been volunteered to take a friend or two with them next time they go!

Good news for Maxx and other young people

Canal & River Trust can confirm that our 2022 programme of events will comprise over 400 Lets Fish introductory events. On top of that, over 20 regional Commonwealth Communities celebration events where young peope gather together, have been arranged as well as the national celebration of young people and fishing experience on the weekend of 17th and 18th September.

Here, amongst other things, there will be freshly designed gudgeon mug on offer for Maxx and hundreds of others like him to win. In addition, Let’s Fish all has a schools programme. Schools that wish to find out more can email us at lets.fish@canalrivertrust.org.uk