The History of Reuben Heaton

Most anglers will have come across the Reuben Heaton name in some shape or form. The firm has a long and fascinating history, brought to you by current company owner, Andrew Race.

One of last original heritage brands in the industry, Reuben Heaton has its roots firmly in the rich history of British tackle manufacture. In 2017 the company will celebrate 160 years of continuous service to the angling trade since Reuben George Heaton, inventor and angler, started the business manufacturing fishing reels back in 1857.

Over the years the Heaton name has become synonymous with quality handmade fishing tackle and this tradition is carried forward to the present day. At the turn of the century wood, brass and ebonite (synthetic rubber invented by Charles Goodyear) were the materials to hand. Large volume production in angling was in its infancy and Reuben Heaton was at the forefront of tackle development, with many patents and revolutionary designs to his name. Heatons experimented with new production methods and materials and were one of the first tackle companies to manufacture reels in aluminium in the late 1890s. 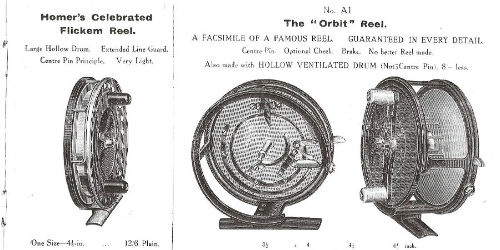 In more recent times, Heatons has become synonymous with high quality angling scales, although scale manufacture at the company reaches back to the mid-1800s in the form of brass tubular balances. Dial scales, however, are a more recent development with the first aluminium match scales being manufactured in 1928. Since that time the company has continued to develop its scales production in both analogue and more recently digital formats, with manufacture now centred on advanced thermoplastics, laser cut components and precision engineering.

Whilst Heatons now employs mechanised processes in manufacture, many of the scales produced are still hand finished and calibrated. This traditional hands on approach is borne out of the founder’s passion for angling and still remains at the heart of the company today. More products than ever before are now manufactured alongside the traditional dial scales at the factory in Market Bosworth. Specialist custom built stainless steel products sit beside traditional hand finished salmon lures and predator jerk baits. 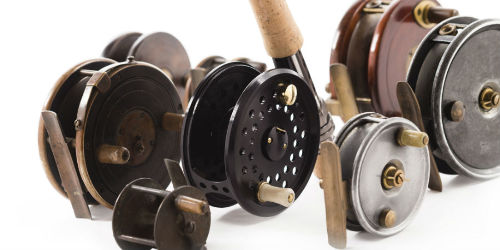 I have now owned the business for some 27 years and I have spent around 20 of those years researching the company and the history of tackle manufacture in Birmingham and this brief overview of the company is hopefully a precursor to an actual book.

The Heaton surname is well known in and around Birmingham. Through the ages Heatons has been involved in many trades centred around manufacture including non-ferrous metals, rubber, steam engines and trams, automated machinery, buttons and most notably money, with one branch of the family having a long-standing involvement with the Birmingham Mint.

Our Heaton, a Mr Reuben George Heaton, born on 1 August 1839, comes from the same origins as the Mint Heatons, but his side of the family branches off some 50 years before the Heaton brothers acquired the minting machinery from Mathew Boulton and James Watt, circa 1850. A keen angler with an inventive mind, Reuben left his father’s brass casting business and set himself up in the business of tackle manufacture in 1857, hence the company of Reuben Heaton was officially born.

Little is known about the early years prior to the 1880s as company records before that time are less comprehensive, but we do know from archive evidence that Heatons was exporting reels around the globe by this time, including to the US, with a number of American style reels appearing in the 1885 catalogue. Heatons’ reels can also be seen illustrated in the catalogues of many brands during this period including Farlows, G Little, Cummins, Bowness & Chevalier, Gillett, McGowan, Allcocks and others.

The evidence of Reuben's business success and his influence on angling is borne out by the prolific number of inventions and patents applied for during this period. From the Hospital Street, Birmingham premises, we see the evidence of frantic development in rods, rod rings and ferrules, landing nets, balances, gut twisting machines, baits and of course the full range of metal and wood reels, including both centerpin and multiplying designs. The company continued to evolve and expand before moving on in the early 1900s to new premises in Aston, Birmingham. 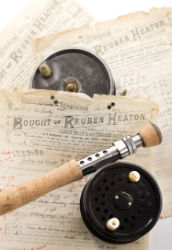 At its height around the turn of the century, reel manufacture was in excess of 30,000 units a year with centre pin style reels making up the bulk of sales. Production included everything from big game reels up to 10 inches in diameter to fine lightweight ebonite and aluminium centre pins for river and canal fishing. Also, brass multiplying winches and scores of fly reels in different metals and alloys and Heatons exported all around the world.

Business continued to flourish at the new site during the early 1900s, with the product range as strong and diverse as ever. The mainstay of the production at this time were the wooden reels for both coarse and sea. A range of metal reels in brass and alloy shows development in this sector too, but the emphasis was on wood. Throughout the company's history, the majority of products bore no Heatons’ marks. Most reels were manufactured for other companies such as Allcocks, Army and Navy stores, Farlows. Reels not stamped with the customer’s name were more often than not just left unnamed.

Reuben Heaton 2nd joined the firm around the same time that the Great War began to take its toll. Heatons began to manufacture munitions for the war effort, as did many companies at this time, and the resulting suspension of trade, combined with the inevitable drop in sales around this time saw Heatons suffer along with everyone else. Products were sold cheaply just to recoup money in an effort to survive, Heatons made many changes to both production techniques and product range, focussing much more on reels and less on accessories. 1923 saw the death of Reuben Heaton 1st, aged 83.

Catalogues from this period, 1910 – 1925, show Silex style spinning reels, special Perfect style fly reels and alloy side casters, proving that Heatons were manufacturing a wide range of alloy reels alongside their core production in mahogany, walnut and brass. Around 1928 production of the first dial scales for match fishing began with models for river, canal and winter match and Reuben Heaton still produces match scales to this day.

The advent of fixed spool reels, saw Heatons for once not at the forefront of the development race. There is no real evidence to say why the company refused to move with the times and develop new reels along the fixed spool route. There is evidence that Heatons dabbled with designs for fixed spool reels, but for some reason these trials never bore fruit. It may be that, having specialised in centre pin style reel production for so long, company bosses decided to corner this part of the tackle market.

As the face of angling began to change in the late 40s and early 50s Heatons’ product range began to look very dated. The early 1930s also saw the production of the first dial scales, adapted from brake testing units which the company made alongside their tackle products.

Heatons moved to Tamworth as a result of redevelopment around Aston and continued to make fishing tackle and centerpin style reels, including Scarborough style sea reels which became the mainstay of production right up to 1971 when the company was split between the family members. The match scales part of the business moved to the home of family member Ralph Heaton and became Reuben Heaton (Scales) Ltd, whilst the reels stayed with John Heaton, Ralph's cousin. 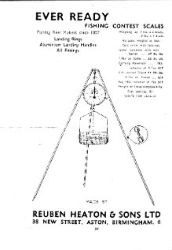 Ralph Heaton continued to produce the match scales in his garage workshop over the next few years, before selling the business on again to a tackle dealer, Ken Austin, around 1975. Whilst at the midland tackle shop, the business revolved solely around the alloy match scales which became a common site on canals and rivers, especially in the Midlands where the match circuit was thriving.

Scale making continued with Ken Austin until the late seventies when the business was again sold to an agent working in the tackle trade. Under new management and now based in Market Bosworth, Warwickshire, Heatons continued to produce traditional alloy match scales, weighing accessories and angling equipment. In a bid to take a wider share of the match scale market, Heatons first bought out a rival match scales manufacturer, Contesta, and then collaborated with scale manufacturer, Waymaster, to develop lightweight, plastic bodied scales for individual anglers.

Move to Barton in the Beans

In 1989 the company was sold to its current owners, remaining at the Market Bosworth premises until the early 90s when increased production meant a move to larger premises in the nearby village of Barton in the Beans in 1993. Heatons again began to manufacture scales for other companies and slowly the business began to grow. The company name changed back to Reuben Heaton Ltd, with the "scales" portion of the name being dropped. Further collaboration between Heatons and Kenwood in 1998 saw the opening of much larger premises in the nearby town of Hinckley. Scales were now being manufactured for both angling and general market, making Heatons more of a general scales manufacturer. Developments saw the firm increase its weighing accessories range and return to the production of more angling based products as well as moving again to larger premises back in Market Bosworth 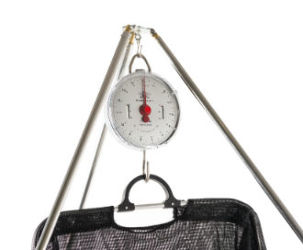 Heatons still produce many non-angling products but the angling market forms the heart of the company. Now almost 160 years young, the company continued into the new millennium. Development and design of new products continues and the company now distributes other brands including US hook manufacturer Eagle Claw. 2017 will also see the company return to its roots of reel making.

Whilst the company history is being researched there are many aspects of the history unaccounted for. Can you help with catalogues or other ephemera? Did you yourself have a connection with the company? Please let us know.