My first experience of Lapworth side pounds was as a small boy. In truth, I was more of a bystander as my grandad took me along with him to watch him fish.

How old were you when you started fishing? six or seven years old

Which was the first canal you ever fished? Stratford on Avon Canal at Lapworth

Greatest fisheries or angling achievement? : Being part of Perls A.C and helping with all aspects of the running and looking after the waters that are under Perls control

Remaining biggest single ambition in fisheries/angling?  I would love it for my children to take up fishing

My all time fisheries or angling hero is and why? I have three people that spring to mind. My mum and dad who was massively influential in my fishing and without them I would not be fishing now and also Jan Porter. Jan, top matchman and all-round angler, was an incredible ambassador for the sport and the brands he represented. I never met Jan personally, but I know he was a lovely man who always took the time to talk and give advice to other anglers.

...it would become the favourite sport that I was introduced to as a child. Nothing gave me the pleasure and enjoyment that fishing did back then and indeed still does to this day.

My first experience of Lapworth side pounds was as a small boy. In truth, I was more of a bystander as my grandad took me along with him to watch him fish. Sadly, I wasn`t given a go with the rod just a stool to sit on and patiently watch. In truth, my fingers were itching to hold my granddad's rod, as I watched him catch fish and unhook them. Still, my time to be allowed to fish myself would soon come

A few weeks later I was in a branch of Woolworths based in New-street in Birmingham city centre with my mom and dad. Myself, my brother and sister were all having a new toy each. In an instant, I spotted the gift that I wanted which was a Winfield float fishing pack. I was so excited.

My dad responded ‘are you really sure you want to learn to fish’ and my reply was ‘yes, please, please take me fishing Dad’.  Little did we all know that it would become the favourite sport that I was introduced to as a child. Nothing gave me the pleasure and enjoyment that fishing did back then and indeed still does to this day.

The following weekend dad took me down to Lapworth and that's where I caught my first ever fish. It was a small silvery roach of a couple of ounces and from that point on I was truly hooked. The following weekend, I was taken to another venue which was Earlswood Lakes where I heard tales of bream  and pike but I couldn`t seem to get Lapworth out of my head. This is where my love of canal fishing grew as I went back time and time again. I didn’t know it then, but it is those lakes at Earlswood that supply the Stratford upon Avon Canal with much of its water, something you don’t think about as a kid. I didn’t know either that the canal had almost been abandoned after the war, we just took it for grand it would somehow always be there.

As I grew up and moved away down south to Somerset I fished many venues, a lot of them being commercial lakes. But as I sat there fishing these heavily stocked commercial venues, the Stratford on Avon Canal at Lapworth was always somehow in the back of my mind. My thoughts wandered back to many childhood memories of not only fishing but of the wonderful days spent at Lapworth with the family having picnics and before we went home popping in at one of the local pubs for pop and crisps.

I couldn`t believe it that two and half years ago when I moved back to Warwickshire and I managed to find a house in the village of Wootton Wawen, which is just a short distance away from Lapworth. I was itching to fish the place again. On my first session at Lapworth in years, the first cast I had a warm contentment come over me. ‘I`m at my true fishing home’ that's just what it felt like. 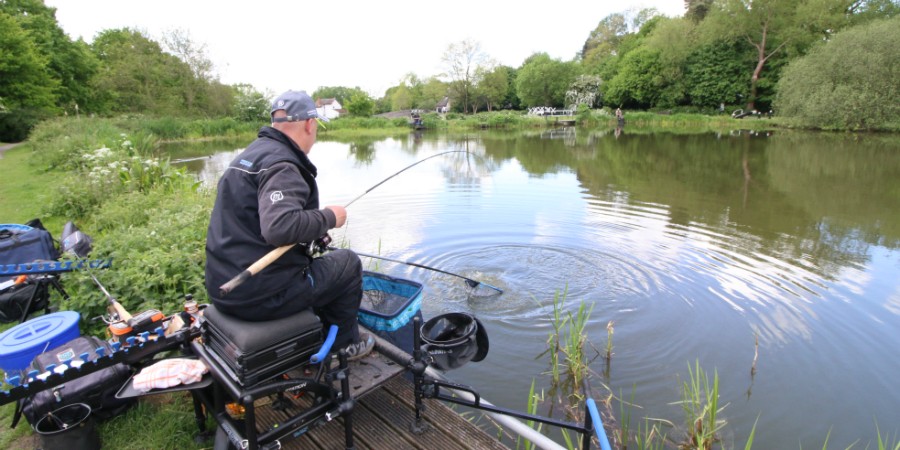 I kept a blog of my catches and I was delighted when I was approached by the Angling Times and asked if I would like to do a feature at Lapworth Pounds for them as they had spotted the blog of the breaming sessions I had there which I managed some nice bags of bream. My favourite spot is now numbered as peg 10.

From there, I met Trevor Bowcott who is the Club Secretary of PERLS Angling club. Our friendship quickly developed. Trevor, through PERLS club, rents several canal stretches from the Canal & River Trust.

The Lapworth Pounds is so unique. The place is such a beautiful spot and you would be hard-pressed to find a part of the canal where you never have to ship in your pole for a passing boat. The pound was designed as a water-saving basin to refill the lock with water as the boats pass through. Lapworth has toilet facilities and has its own excellent carpark. Fishing permits are priced at just £3 a day and £20 a year for club membership is excellent value too.