As my favourite canal is the Calder & Hebble Canal, it will come as no surprise that my favourite peg had to be somewhere along this length of canal.

Current club, team or Sponsor?: Canal & River Trust Angling Team. We compete in the Angling Trust Division 2 national, finishing 14th in each of the past two years

How old were you when you started fishing?: 11

What is your favourite venue?: Calder & Hebble Canal

What is your favourite species?: Roach

What is your favourite bait?: Hempseed

What is your greatest angling achievement?: Representing England U18s in 2012, and bringing home a team silver and individual bronze medals with two section wins.

What is your ambition in angling?: To just keep enjoying it

Who is your angling hero and why?: My dad, he got me into it fishing and kept me positive about striving to achieve my goal of getting into the England U18s team.

The reason I love the Calder & Hebble Canal is simply because of the variety of fishing. Every stretch of the canal requires a different approach for different fish species.

As my favourite canal is the Calder & Hebble Canal, it will come as no surprise that my favourite peg had to be somewhere along this length of canal. Over the years I have fished just about every stretch of this canal, from Wakefield all the way westwards to where it joins the Rochdale Canal at Sowerby Bridge. Choosing just one peg is tough but eventually I decided to plump for a peg on the Dewsbury Arm of the canal.

The reason I love the Calder & Hebble Canal is simply because of the variety of fishing. Every stretch of the canal requires a different approach for different fish species. It can range from fishing squats or bloodworm for small fish, to fishing worms or hemp for the bonus fish. The depths can also vary, from around 4ft 6inch at the deepest at Sowerby Bridge, to around 9ft at the deepest at Calder Grove. The usual species such as roach, bream and perch can be caught in the canal, as well as some surprises! 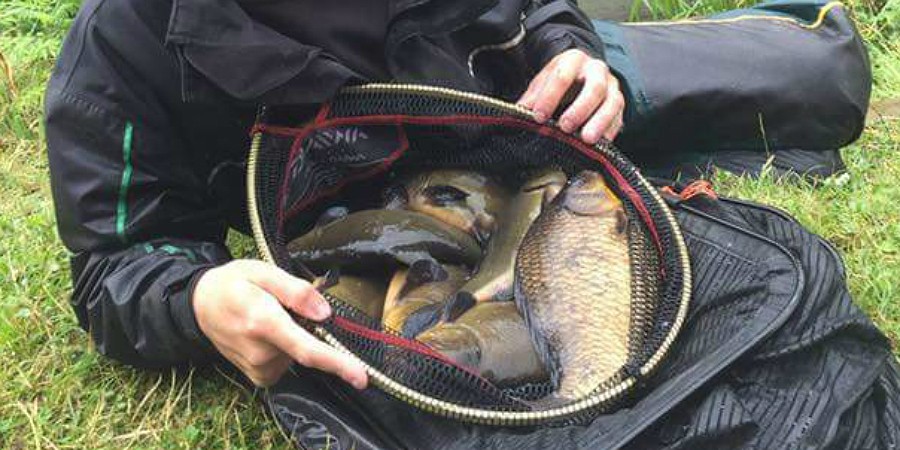 Memorable match on my favourite peg

One match that stands out for me amongst others, is an open match I fished on the arm section of the Dewsbury arm of the Calder & Hebble Canal around August a couple of years ago. The length is rented from Canal & River Trust by the Thornhill Angling Club.

They offer very cheap day permits (just £3.00) and an annual membership for £32.00. This section is full of reeds and features, and holds a lot of bonus fish as well as the usual species. The pegs to draw are the lower numbers, and it will come as no surprise to anyone that I drew the fancied peg 7, which I have decided is my favourite canal peg.

As this stretch of the canal is only around eight or nine metres wide due to reeds and features, my approach was simple. Two lines, one with worms and one with casters up to the reeds to target bonus fish. Strong rigs of 0.14 with an 0.14 hooklength, a size 16 hook with strung out shot and a 14 hollow elastic completed the rigs. Only two rigs were set up, one 0.4g and one 0.2g to cover the 4ft of depth.

Chopped worm on one line and casters on the other, regularly topped up after each fish kept the approach simple. A tench after 30 minutes on a worm got my hopes up for a match victory, even after its spirited fight in the middle of some lilies when I thought I was going to lose it. My next fish however came as a surprise. After a less spirited fight than the tench, a crucian carp appeared beaten in my landing net. More tench followed throughout the day with regular topping up of feed on both lines. When the scales arrived, I ended up with 14lb 15oz made up of six tench and the crucian, plus a few bits comfortably winning me the match.

Other notable sections include Calder Grove and Bingley Arms, which often throw up good nets of bream to 40lb. 10lb can also be achieved from most pegs along the full length of the canal. You can find out which clubs rent the fishing on the various sections of the Calder & Hebble Canal here.

The Dewsbury Arm is often used by the Trust as a venue for fishing taster sessions as part of the Let’s Fish Campaign.