Let's take a quick look at Christmas past and the strong tradition of fishing during the festive season.

Fishing in the winter

The words aren’t quite right, as some of you well know, but that’s a liberty I can take at Christmas. Let's take a quick look at Christmas past.

A quick browse through part of my newspaper library shows what the angling press thought about Christmas past. Take the Fishing Gazette for December 26th 1930. W R Pape of Newcastle supplied a list of 'Anglers Christmas Gifts' which included ashtrays festooned with hand painted trout or salmon.  Definitely not a product that would sell today!

Just the ticket for the girlfriend or wife in the 1930’s was a 'Ladies Hand Painted Powder Box' with fish motifs. You could even have one of these with a roach on it (instead of salmon or trout). Bernard’s of Piccadilly were also on the same tack with 'hat ornaments' made from real salmon flies with protected points. A Unisex product even in those days!

Fur and feather at Christmas

I picked up a December 23rd 1960 Angling Times, where the Mitre and Keys Leicester pub team set out on their annual 'Fur and feather' outing.  Last man on the bus was vice-chairman Ray Robson dressed up as Santa Claus. His sack contained a variety of humorous presents including a small chicken on a very big plate, a string of balloons etc.

Some readers may be wondering what is meant by 'fur and feather'. These days the 'fur and feather' is usually a club or open match held shortly before Christmas and is a throwback to much earlier times when many different household prizes, rather than money, were on offer to the lucky winners. In those days, the Fur might have referred to a rabbit or hare and feather often meant poultry or game birds as prizes. 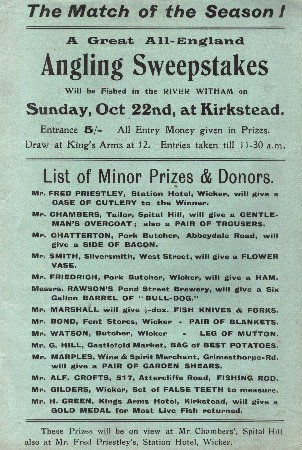 Back in 1877 the Barnsley Fitzwilliam Club ran a match where the top prize was 27 shillings (£1.35) followed by a shiny mirror for second prize. Other valued awards included a sewing machine, clocks, and bottles of whisky, a live pig and so on. Very much the forerunner of the modern 'fur and feather'.

Look at this original prize list from an 'All-England' open sweepstake fished on the River Witham circa 1920 which were the forerunners of the 'fur and feather'. It was billed as the match of the season, and you can understand why.

It reminds me of the TV 'Generation game' with a conveyor belt list of awards something like this: a case of cutlery, gentleman’s overcoat and trousers, a side of bacon, a flower vase, a ham etc. Amongst this lot are two absolute 'crackers'. What do you do with a six-gallon barrel of Bulldog beer? Offered by Mr Gilders of Wicker was a 'set of false teeth made to measure'. Well that lucky winner would always be sure of a bite!

Oh for the good old days of the Christmas coach outing. No driving, bottled beer in crates down the aisles, and if you were lucky a 'refreshments' stop at a convivial meetinghouse (pub to you and me) followed by a snooze on the way home. I don’t suppose many of today’s young anglers have ever been on a coach trip before. They don’t know what they have missed.

And what about fishing during the Christmas holiday period? In the past I ,along with many others, regularly fished the traditional Boxing Day match. In the 1970's respected angler politician and writer Maurice Kausman reported on a number of fur and feather matches in the Huntingdon area plus a Christmas day match before lunch and a Boxing Day match won with 30lbs of bream.

Despite wind, rain, snow or ice Maurice reputedly fished every Christmas morning, preferably on the Great Ouse at Huntingdon, but once caught 67 lbs of chub on the Hampshire Avon before tucking into his Christmas turkey. Beat that if you can!

You can find more intriguing facts and figures from the past on our history pages.