30 fish of the Trent

A favourite with anglers is the River Trent. It's famous for the old 2,000-peg Trent Angling Championships, trotting the stream for roach on the Burton Joyce Golden Mile, and now the haunt of anglers in pursuit of big carp and barbel.

The River Trent rises in North Staffordshire, flowing for some 250 miles. It takes on board waters from the Tame, Dove, Derwent and Soar, flowing majestically through Nottingham and Newark before entering the North Sea at the Humber Estuary.

The Trent is the third longest river in the United Kingdom and unusually for rivers in Britain, the Trent flows in a northerly direction. Many years ago, the course of the River Trent was used to mark the boundary between the north and the south of England.

JW Martin in his 1906 book, 'Coarse fish Angling', had an interesting story to tell about the Trent. According to author JW Martin, this wonderful river either derived its name from the 30 tributaries, the 30 abbeys that lined its banks or the 30 species of fish that swam in it. From my schooldays, the French (Norman) word 'trente' means 'thirty' so there may be some truth in the statement.

Poet Michael Drayton (1563-1631) put this into a readable verse some three hundred years before Martin:

"A more than usual power did in that name consist,
Which thirty doth import: by which she thus divin’d
There should be found in her, Fishes thirty kind;
And thirty abbeys great, in places fat and rank:
Should in succeeding time be builded on her bank:
And thirty several stream from many a sundry way,
Unto her greatness should their wat’ry tribute pay."

"The Beauteous Trent which in itself enseams, thirty kinds of fish and thirty different streams."

Even old Izaak Walton suggested the 30 streams and 30 fishes origins in his book the 'Compleat Angler' of 1653. Would it be so difficult to identify the 30 tributaries, probably long since dried up or now just underground culverts? Or the abbeys, many presumably destroyed by Henry VIII and his dissolution of the monasteries. Being anglers we have more chance with the fish. Or do we?

I've taken a look at the abbeys and come up with nothing. The 30 streams sounds plausible but internet investigations suggest there are more than 30 when counting rivers and all their tributaries. So back to the fish. 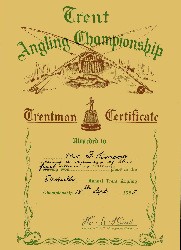 Of course the crayfish is an edible crustacean. 'Frenches' and 'Lenbrood' no longer exist in modern English so it is questionable what they are. Striking omissions from the list are bleak and tench. These old wags included lampreys, smelts and flounders not to mention loaches, miller’s thumbs (bullhead) and sticklebacks.

Once again the tench and bleak are still missing and the salmon is listed under a variety of names. Is the muscle a 'freshwater mussel'? The stream pink and the 'sand eel' somehow get into the list. In the old days the sturgeon was a common fish in Europe and would undoubtedly have inhabited the Trent system. Hugh Sheringham mentions them in his 1912 book 'Coarse Fishing' and other contemporary writers mention the occasional sturgeon entering our river systems.

A 1985 study suggested that about forty fish species inhabit the Trent, but they were not listed. None of these lists include the whale. Stop laughing. Two whales were found at Gainsborough in 1938 having come up the Humber Estuary. The latest occurrence was in 2003, also in the Gainsborough area. And of course the whale is a mammal not a fish.

Well that's the 30 fishes idea out of the window. I thought there might be 30 bridges or crossings (fords) on the Trent but that's all conjecture on my part. Today there are reckoned to be 80 bridges that cross the river.

More internet research reveals the Trent’s name is derived from a Celtic word possibly meaning 'strongly flooding'. The name may be a contraction of two Celtic words, 'tros' (over) and 'hynt' (way). This may point to a river that is prone to flooding. However, a more likely explanation may be that it was considered to be a river that could be crossed principally by means of fords, i.e. the river flowed over major road routes.