Mobilising troops during wartime has always been a considerable logistical challenge. Britain’s troops were first transported by canal during the Napoleonic Wars and the practice continued through the 20th Century.

Although the battles fought through both World Wars were abroad, canals were used to move men and materials around the country and on their way to being shipped to France.

We have seen how waterways provided important lines of defence and were strengthened to resist attack in the event of an invasion over land. Garrisons, based adjacent to canals, also made use of the waterways as a fast and easy means of transport. 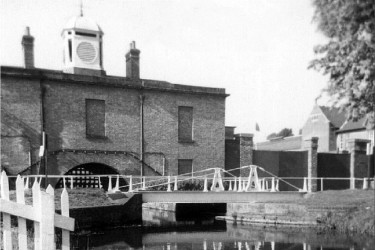 The Grand Union Canal runs right through Weedon Barracks’ warehouses. Note the portcullis in the front of the picture. (source: The Waterways Trust Archives Ellesmere Port)

Weedon Barracks in Northamptonshire is a notable example of the military making the most of the canal network. The site was built along both sides and literally over the canal at the strategic junction between the Grand Union Canal and Watling Street.

The canal ran through the depot’s perimeter wall with a protective portcullis at each end. It operated as a garrison, warehouse and armoury manned by the Royal Army Ordnance Corps, so troops and vital supplies could be swiftly transported to where they were most needed. First built in 1803, it was used as a garrison by the Royal Army Ordnance Corps through both World Wars and maintained a military purpose for over 160 years.

In 1965 it was handed over to the Ministry of Supply and used purely as a storage depot.[1] The Royal Ordnance Depot is of great historic value and national significance; there are nine structures on Historic England’s Listing designated Grade II*. The site is now in private ownership and rented out to individuals and companies on a commercial basis 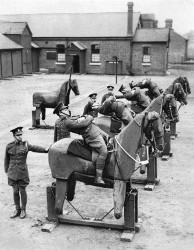 The role of horses is fundamental to the design and, for many decades the operation of canals. Horses played a vital role in wartime too. Here the 7th Queen's Own Hussars can be seen at Weedon learning how to stay on this unpredictable mode of transport. (Photo: The New York Times [March 21, 1935])

The anticipated German invasion thankfully never occurred, and the canal based defence network was not needed. Nonetheless, troops had an important presence on the canals as they contributed to keeping vital supply lines, to industry and the military, open.

In 1916 the military established battalions in the Bedfordshire, Warwickshire, Yorkshire and Lancaster, Liverpool and Birkenhead Regiments known as the Transport Battalions. They provided support to civilian labourers in the transport of essential goods, which included working on the canals. The soldiers in the Transport Battalions were trained by the experienced canal men, before being granted use of their own boats. Their inexperience meant they were initially seen as more of a hindrance than a help but they fulfilled a key role in keeping the country supplied. 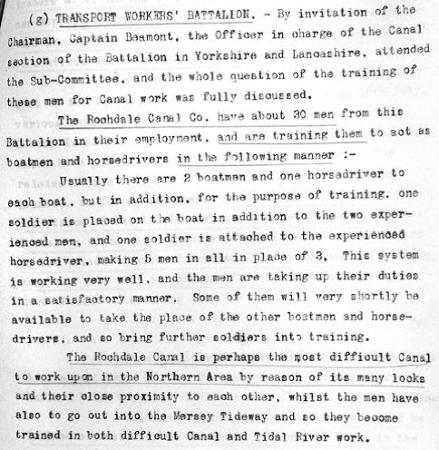 This letter reports on how the 30 battalion members are being trained by the Rochdale Canal Co. (source: Leeds and Liverpool Canal records.[3])

They were disbanded in 1919 after the end of the Great War, the men who had been working the canals returned to their previous occupation leaving a shortfall of labourers working the waterways. Many canal companies struggled to stay profitable when the government handed control back to them. Transport Battalions were not re-established during WWII but a government training scheme was created to encourage men and women to go work on the canals in support of the war effort.

The work carried out by the heritage team is extremely varied, not one week is the same. Read more of their blogs to discover more about what they get up to.