The recent floods devastated some of our historic structures

December 2015 saw two storms across the north: Storm Desmond and Storm Frank causing flooding to thousands of people’s homes and widespread damage to the road and rail infrastructure. Our canal network unfortunately did not survive unscathed. Elland Bridge in West Yorkshire and Stainton Aqueduct in Cumbria, both Grade II listed structures, sustained serious damage. This week, William Froggatt tells us about the damage caused to the Stainton Aqueduct.

Flooding in the North East

Construction of the Lancaster Canal commenced in 1792 and by 1797 it was possible to travel on the canal from Preston to Tewitfield (just north of Carnforth). The engineer for this work was John Rennie and the canal included such marvellous feats of engineering as the Lune Aqueduct (Grade I) at Lancaster. Tewitfield presented a major topographical barrier and so there was a brief hiatus of works until 1817 when Thomas Fletcher was appointed engineer to extend the canal north to Kendal.

Fletcher, with the assistance of William Crossley Junior, built several structures to rival Rennie’s Lune aqueduct and the canal was finally completed in 1819. Amongst those structures is the Sedgwick Aqueduct (Grade II), the Hincaster Tunnel (Grade II) and its associated horse-path (Scheduled Monument) and the modest but graceful Stainton Aqueduct (Grade II) carrying the canal over Stainton Beck.

Stainton Aqueduct is constructed of squared, coursed limestone with a segmental-arch with rusticated voussoirs. The arch is 12 ½ foot high and 16 ½ wide at the base. It is flanked by curved and battered wing walls, built to retain the earth embankment, and extending 22 ½ foot from the tunnel entrance and standing 28 ½ foot apart at their extremities. The original specification describes an inverted arch running through the aqueduct over which the beck flows, and between the wing walls a ‘well laid pitching of stones 18 inches deep and in regular courses’. Over these a path was built to take a footpath under the aqueduct. The abutment walls of the aqueduct are described as being four foot thick with four foot square counterforts at ten foot intervals. 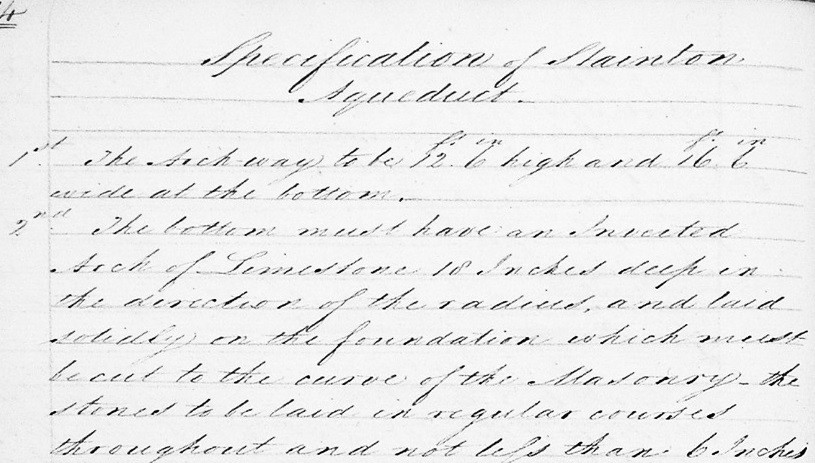 The first damage occurred following the Desmond storm on the downstream side of the Aqueduct. Judging by debris caught in surrounding trees it would appear that water levels in the beck were six or seven feet higher than normal. Turbulence caused by this volume of water scoured the bed of the beck, lifting the stone pitching and washing away a stretch of the path. This enabled water to undermine the foundations of the south-west wing wall leading to its collapse. Where the path once stood the beck is now one and a half metres deep. 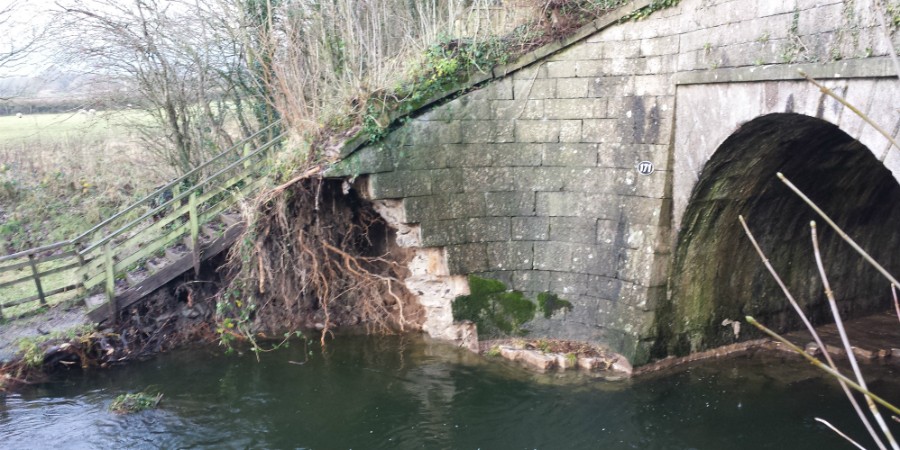 Subsequent scouring of the beck has undermined the south east wing wall resulting in the wall subsiding and rotating. The toe of the wall has moved outwards approximately 18 inches, with the top skewing back towards the Aqueduct a similar distance. Due to this the integrity of the arch has been broken, and the beck is now flowing behind the wall. This is unfortunately gradually washing away the soil and fill from the embankment, which has led to a collapse of the tow path above. 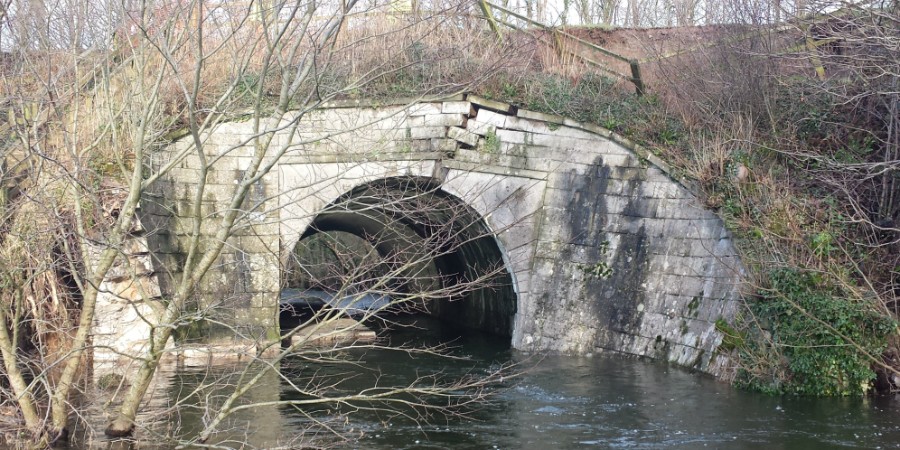 While water levels remain high it is difficult to assess the full extents of the damage to the structure and the bed of the Beck. Action has been taken to remove the water from the canal above to reduce the pressure on the embankment and to mitigate any future breach. We will also be protecting the foundations of the wing walls to reduce the possibility of further damage to the structure.

In the longer term it is our hope to rebuild the aqueduct according to the original specification drawn up by Thomas Fletcher two hundred years ago. Given the remote and difficult location this will no doubt be an expensive undertaking, with early estimates indicating a cost of at least £1.2 million.

This is just one of the structures across the north that has been affected by the floods. Elsewhere bridges, embankments and towpaths have been damaged or destroyed. To find out more about how you can help us re-build the canals please visit our website.