The Canal and River Trust holds an extensive collection of hand drawn maps and documentary records relating to the canal network, which are predominantly held at our archives at Ellesmere Port. These records, although in some cases over two hundred years old, remain a vital source of information both for the heritage team and for our engineers in understanding the development of the canal network, its history and its construction

Plan of the Trent and Mersey Canal at Shardlow (undated)

“The foremost cartographers of the land have prepared this for you; it’s a map of the area that you’ll be traversing.”

[Blackadder opens it up and sees it is blank]

“They’ll be very grateful if you could just fill it in as you go along.”

The construction of the canals during the eighteenth and nineteenth centuries was, to put it simply; hard work. With no accurate contour maps, and little knowledge of the underlying geology, selecting and surveying a route was difficult. As such, canal engineers such as James Brindley, and later John Rennie, John Smeaton, William Jessop and Thomas Telford were very much filling in the map as they went along.

Perhaps one of our most revealing collections of documents is the Plan of the Canal from Birmingham to Autherley as surveyed by John Snape in 1777. 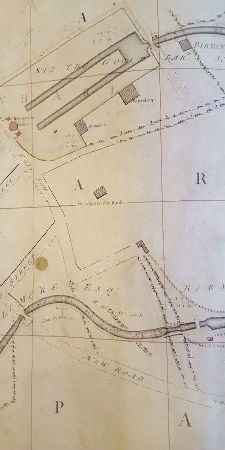 This fascinating book includes hand drawn maps of James Brindley’s canal network through Birmingham. Brindley’s ‘Pioneering’ contour canals were so called because they followed the contours of the landscape, avoiding deep cuts through difficult terrain. Later ‘Heroic’ engineers, in this case Thomas Telford, favoured expediency over convenience and carved through the landscape with straight, deep cuttings. Faint pencilled annotations onto Snape’s drawings show the later routes of the straightened canal. Many of Brindley’s meandering routes have now disappeared beneath later development in the city.

These maps also give insight into who owned the land into which the canals were dug. Anyone familiar with Birmingham will no doubt recognise the names Charles Colmore Esq. and Mr Farmer, who would later lend their names to the grand street of Colemore Row, and the Farmer’s Bridge flight of locks on the Birmingham & Fazeley Canal. Mr Baskerville’s House remains in Centenary Square, although the Birmingham Canal Navigation Offices (coloured red) which were located at the end of Paradise Row closed in 1926 and were demolished in the 20th century.

In addition to early canal maps and surveys, the Trust also holds a number of indentures and deeds pertaining to the canal network. These often beautifully illustrated and calligraphed documents conveyed land to canal companies to allow the construction of the canal. These included agreements with multiple landowners, as the canals cut through successive plots of land as they crossed the countryside.

The example shown below was agreed between the Company and Proprietors of the Birmingham Canal Navigations and Brooke Robinson Esq. of Banford, and Francis Grazebrook Esq. 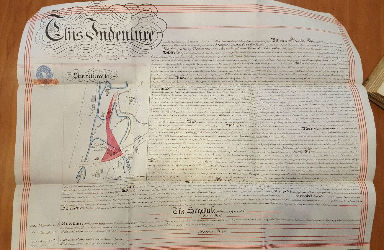 of Dudley in the year 1894. Robinson and Grazebrook were paid a sum of £100 and £200 respectively by the canal company to allow passage of the canal through their lands and the construction of a new pumping engine at Blowers Green. The former pumping house remains today, and the name of Francis Grazebrook is remembered in the nearby Grazebrook Industrial Estate.

Care & Conservation of the canal network

Comparison of historic documents and map records against modern Ordnance Survey data, as well as standing built heritage and sites helps us to better understanding the evolution of the canal network and its buildings. This in turn informs our decisions regarding the appropriate care, conservation and development of the historic canal environment, ensuring its considered preservation for future generations.

The Canal and River Trust collections can be searched and viewed online at Collections or visited by appointment at The National Waterways Museum, Ellesmere Port.