Even after more years than I care to mention working in the Heritage Sector, I never stop learning.

I’m well aware of the principles of conservation concerning our historic buildings, and working for the Trust I get plenty of experience dealing with stone, brick, timber and lime. But unlike my Heritage colleagues in Birmingham for example, where they see the lovely cast iron Horsley bridges on their way to the office everyday, I haven’t much experience of large scale metalwork.

So working with heritage ironwork conservation specialist and blacksmith Rowan Taylor and his colleague Mike Firth-Letschert has been a fabulous experience. Rowan has done a lot of work for the Trust over the years, and recently has been repairing wrought iron cramps at a Grade II Listed lock in the Peak District, conserving the cast iron parapet on Pontcysyllte aqueduct and working out how to sympathetically add safety bars to some early 19th century cast iron lock tail bridges.

When we knew we had to repair the metal parapet on the bridge which carries the towpath over the side arm off the Trent & Mersey Canal at Malkin’s Bank near Sandbach, Rowan and Mike were the obvious choice. 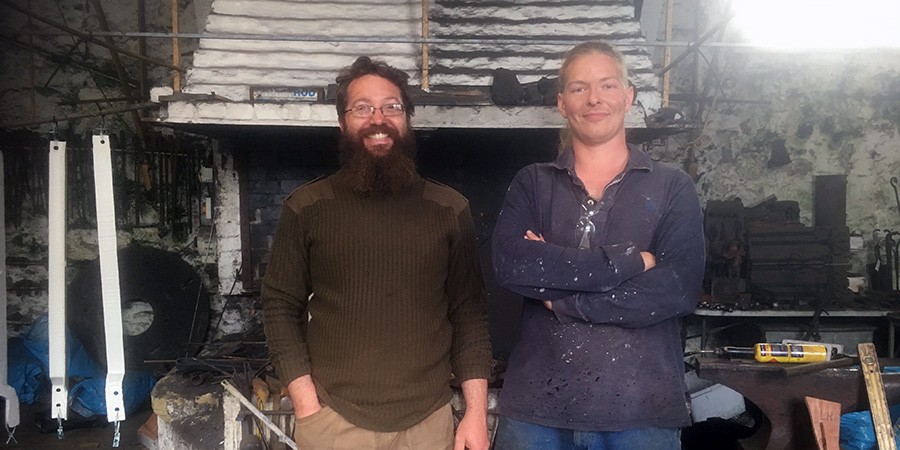 The Trent & Mersey Canal is over 90 miles long, and is a narrow canal for the vast majority of its length, but at the extremities to the east of Burton upon Trent and west of Middlewich, it becomes a wide canal.

The plan of a canal connection from the Mersey to the Trent (‘The Grand Trunk’) came from canal engineer James Brindley. It was authorised by an Act of Parliament in 1766 and the first sod was cut by Josiah Wedgwood in July that year at Brownhills, Burslem. In 1777, the canal was completed, including more than 70 locks and five tunnels.

We have found little history about the side arm at Malkins Bank, which seems to be a later addition to the original canal; but we estimate the bridge and its metal parapet to date from the late 19th to early 20th century.

I assumed it was a wrought iron structure, but Rowan told me that, based on analysis, the parapet was actually made of mild steel, and is the earliest use of mild steel he has come across. It seems that the turn of the century marks the transition from the use of wrought iron to modern steel.

According to Rowan and Mike’s analysis, the handrail, main uprights and ropeslides of the parapet are made from mild steel angle-iron, with wrought iron tube acting as a middle-bar.  The wrought iron tube was particularly interesting as it was manufactured using the same industrial forge-welding techniques as were used to produce musket barrels from the 18th to 19th centuries. At some later date, post 1960's, some flat-bar and round-bar have been used to extend the middle-bar beneath the rope-slides.

Rowan and Mike carefully dismantled the parapet and transported it to Rowan's smithy at Ellesmere yard. Here, rotten material was carefully cut out and replaced with like-for-like material, and they have hot riveted new joiner-plates to install a newly forged section where the original could not be saved. The philosophy is the same as I use when repairing masonry -  keep as much historic fabric as possible, remove minimum rot, and ensure new sections are honest and sympathetic.

Years of boats being hauled into the side arm by tow ropes have scored the metalwork and we wanted to retain these rope marks or ‘burns’ wherever we could. The blacksmiths estimated the original thickness of the steel and have carefully transitioned the rope marks into the new material. As Rowan says, this illustrates the preservation of those burns quite well.

Everything then received at least seven coats of Linseed oil-based paint, the safe modern substitute for lead paint.

Looking splendid back on site, the newly repaired parapet still retains its historic character but is now surely fit for another 100 years.