Visitors to the Kennet & Avon Canal may have noticed some of the many concrete pillboxes dotted along its banks. These are part of the famous World War II GHQ Line Blue, a defensive stop line constructed to protect Britain against expected invasion in 1940. The threat passed but seventy five years later there is still plenty of evidence intact. 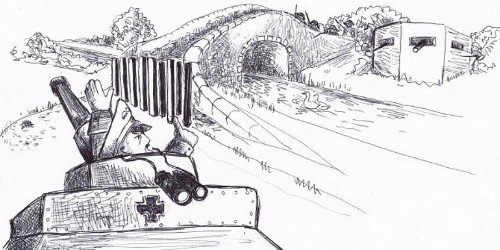 The surviving pillboxes have become part of the country’s heritage and several of them are now listed structures. Perhaps not quite in the same league as the historic bridges and locks nevertheless they are significant features along the Kennet & Avon. A reminder that the now tranquil canal could have been critical to the freedom of Britain in World War II.

What people may not know is that Line Blue also included all sorts of other defences as well as pillboxes. One of these was the anti-tank ‘hedgehog’, used to defend bridge crossings. A series of deep slots were set in concrete below the road surface which could hold vertical steel rails. The rails could be removed to allow local traffic to use the bridge but when in place they created a a spiky defence to halt an advancing armoured column. Hence the nickname hedgehog. 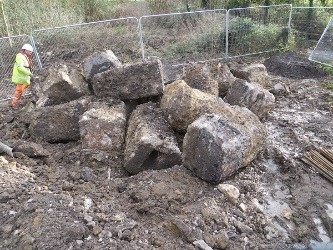 Concrete remains for holding the anti-tank rails excavated from below the road.

Nearly all of the different defences along the canal were carefully recorded for posterity in 2006 and these can be found on the Defence of Britain website. However until this year nothing had been recorded for the wharf bridge at Seend Cleeve in Wiltshire. That changed last spring during major works to repair the bridge when some impressively large concrete blocks were excavated from below the approach road. On closer inspection a slot nearly a metre deep was identified in each block. There was no doubt these were the remains of an anti-tank hedgehog installed to protect the bridge. So now a little bit of history has been added to the canal’s archaeological record at Seend Cleeve.