‘As crumbly as Weetabix’. Perhaps an apt, if not the first description you would think of when trying to articulate the destruction of Elland Canal Bridge in the 2015 Boxing Day floods.

But then you may not have the amazing and fertile imagination of a Year 5 pupil from Elland C of E Primary School. I have had a wonderful day spending time with a most creative and funny class of young people. As the heritage advisor for the Trust covering the historic side of the project to reinstate the bridge across the Calder and Hebble Canal, I work with many clever people, but none of them, even our most experienced engineers have described the old bridge as ‘Weetabix-like’.

It’s a good description though. It did indeed crumble under the sheer force of the water when the river broke its banks last year. And there were other Year 5 similes too – ‘as angry as a crazy bear with teeth made out of stone’, and ‘as noisy as an elephant stampeding and trumpeting’. It must have been a terrifying sight and some of the children were in the vicinity and saw the power of that torrent of water running through their valley.

All these memories and ideas are being captured by Gordon MacLellan aka Creeping Toad who is running a 1 day workshop for Years 5 and 6. Gordon uses words and images to pick up the children’s feelings about the floods as well as the implications flooding has on people and wildlife.

I joined Year 5 this morning to listen to how one pupil thought the water was like ‘an evil pug, biting someone’s leg’, and another ‘an angry snake slithering towards the bridge ready to eat it’, and all these ideas, images and phrases are being captured in a long pop-up river art piece. 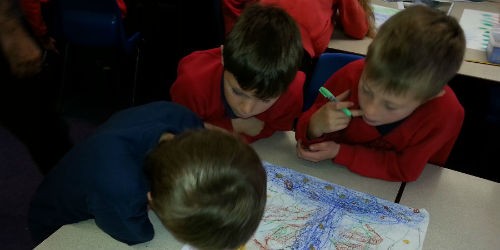 We have taken a few of the masons’ marks stones to the school for the children to take rubbings. These are the marks the original stone masons made on the back of the stones so they would get paid, back in 1811. Its likely that the masons could not write but each had their own mark, such as a cross or a triangle shape.

Year 5 had no trouble writing, and their pop-up, some of their artwork and the masons’ stones should be on display at the forthcoming Elland Canal Bridge Open Day scheduled for Saturday 26th November. Whilst the bridge will not be fully completed by then, much work has been done and there will be plenty to see, so fingers crossed there won’t be any ‘angry bulls charging at the bridge as if it were its prey’ before that Saturday at least.

To find out more visit our Open Days page