Crossing the Thames Barrier on a narrowboat

Some of you will have heard of this amazing initiative that is called ‘Boating Buddy’. Basically, a boater offers a ride on their boat to a member of staff from the Canal & River Trust.

Narrowboat through the Thames Barrier

Boating-buddy - an experience I couldn't miss

I count myself amongst the lucky ones. Firstly, because a few years ago I had the opportunity to take a boat out on the Regent’s Canal several times and absolutely loved it! Secondly, because as a heritage adviser I do get out to see sites, occasionally. But getting the opportunity to spend some time with experienced boaters hearing their stories gives us another insight.

So, when the boating-buddy scheme was announced early in 2015 I was looking forward to taking part.

The opportunity came in just before Christmas to join the St Pancras Cruising Club on their convoy to the Excell Boat show, on the 7th January 2016. This meant taking the narrowboats on the Thames! Organised by Andrew Phasey I knew we would be in good hands and I just couldn’t miss that experience.

We started the day at Limehouse Basin, 7.50am – it was still dark – where myself and my colleague Phil were introduced to our hosts: Steve and Beryl on Anne-Louise. Forecast was OK, a little rain but mostly dry with some sunny spells. Still, I came prepared with waterproofs from head to toes, including gloves; and some home-made chocolate cookies. 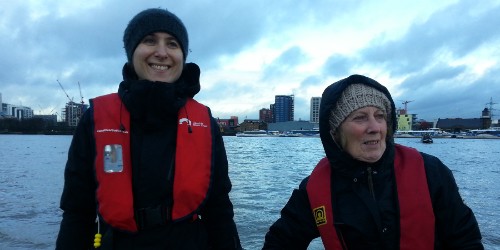 We set off along the Limehouse Cut, then went through City Mill Lock on the Bow Back Rivers before going through Three Mills Lock, down Bow Creek and once past Trinity Wharf onto the Thames, where the convoy held the passenger ferry (apologies to any commuters we might have delayed!).

On a wet, grey January day…. 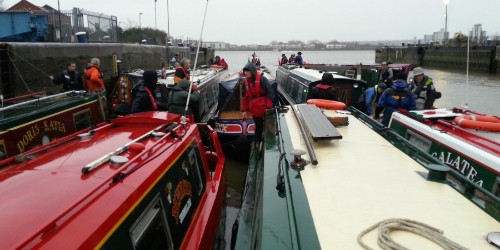 By then, we realised that the weather forecast was not quite accurate and at best we would get very brief dry intervals, but to my relief the Thames was fairly flat. I have to admit that eventhough I have lived in London for over 15 years I had never been to the Thames Barrier. Phil was steering by then but he decided taking photographs was more important (he is an engineer) and he handled me the tiller. So, there I was – steering a narrowboat through the Thames Barrier.  I surely will never forget that!

By the time we got to the Royal Docks, the water was quite choppy with little white horses and my feet and gloves were completed soaked, but Steve and Beryl warmed up some soup to keep us going to our final destination.  And as we all moored at Excell and congregated on the dockside for a restorative and warming drink the sun pierced through the clouds, announcing a dry and sunny afternoon!

It has been an amazing experience spending the day with Beryl and Steve, hearing about their experience as boaters. We couldn’t have dreamed of better hosts and Andrew organised everything beautifully.