A woman's working life on the waterways

A wartime experience written by Daphne March, relating four years of her life as a commercial transporter on the 'Heather Bell' narrowboat.

In a personal account of her wartime experience, Daphne underscores the many romantic notions that persisted about living and working on the waterways. Daphne’s niece, Kathryn, wrote to share links to a collection of historic photographs, taken by the Ministry of Information on 28 April 1941. These beautiful images do little to dispel the myth that the back-breaking labour involved in commercial transportation by narrowboat is anything other than a picturesque idyll. 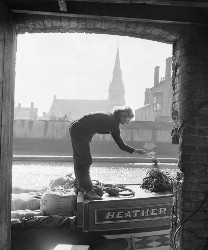 In response to our recent articles, commemorating the impact of war on the people and places of the waterways, we received a most helpful and interesting correction.

We had, apparently like many before us, muddled up our Daphnes. Daphne March, not Daphne French, operated mainly between Gloucester and Birmingham navigating on the Severn, on the Worcester & Birmingham and the Shropshire Union to Ellesmere Port. We corrected our previous article on the Idle Women and wanted to share some more insights from life on the waterways in wartime.

Daphne started boating during the winter of 1941 when snow was deep on the ground and there were no women skippers. It was two years before Daphne felt she had attained the competence and social standing of a professional boatwoman. Her new status was gained at the cost of long hours, heavy work handling cargo, anxious moments at the tiller, and exposure to all weathers. Daphne felt the work done by boats and boat people was veiled behind a curtain of obscurity, until AP Herbert published his novel 'Water-Gypsies'.

The four years Daphne spent working on the Heather Bell they carried more than 7,000 tons of cargo. She took slack to Worcester, spam to Nottingham, sugar to Wolverhampton, and flour to Tipton, sauce to Wigan, coal to Oxford, copper and aluminium to Birmingham, shellcases to the Potteries, grain to the Mersey, and RAF stores to the Bristol Channel. Each cargo had its own peculiarity, and each canal its rule of the road. On some ‘cuts’ boats keep to the right, on others the left, on some empty boats must give way to loaded ones, and on others uphill takes precedence over downhill traffic.

A usual round trip started with loading 352 sacks of flour at Worcester for Tipton. In the first fifteen miles there were 36 locks to operate. If these were against them, they had to draw them off as well as fill them, doubling the work. At the top lock they would thankfully take the shiny windlasses and stow them in the cabin for the 15-mile ‘pound’ ahead, with three tunnels, the last 1¾ miles long. There was no lighting in these tunnels. If another boat had just gone through, her smoke reduced visibility sometimes to 15 feet making steering the 71 feet boat difficult.

At the Bar Lock they would pass their tickets to the toll-clerk, hear the latest boating news, fill the water-can and perhaps stop for the night at a tie-up. These stopping-places usually boasted a lock, a shop, a ‘boozer’ and a stable. They were often called after lock-keepers, some still alive, some living in the memories of old boatmen, and others long since forgotten. At Gill’s, Parkerses, Dick’s, Denny Merril’s Mother’s lock, Daphne met the families who had given their name to the place.

At Tipton the flour was unloaded in a couple of hours and the journey continued on to Cannock Chase for slack. It was perhaps easy then to make friends with the day or ‘Joey’ boatmen who had homes ashore but never went far from the collieries. Asides the hard work and long hours Daphne remembered the people and the landscape fondly:

"I have been glad to know the Black Country, which looks at its best from the water, and its inhabitants – kind people with a good sense of humour."

All photos copyright of the Imperial War Museum. You can read Daphne's full article here.