A Sad Farewell to Elland Bridge

The Boxing Day flooding of 2015 devastated both properties and communities in the Calder Valley in West Yorkshire.

The Boxing Day flooding of 2015 devastated both properties and communities in the Calder Valley in West Yorkshire. It made grim viewing on the regional television and my colleagues were hard at work over the Christmas holidays trying to limit the devastation on the canal network.

So for me, the New Year meant assessing the affects on the historic environment along the waterway, where bridges, embankments and towpaths had been damaged or in some cases completely destroyed.

In this second part of flood damage to historic structure, Judy Jones talks about the sad tale of Elland Bridge.

Sadly, the Grade II listed masonry arch bridge at Elland is so badly damaged, it cannot be saved and will have to be demolished. The bridge appears to date from the original canal construction in this area, around 1770, which means the canal is one of the earliest in the country and of real historic significance though we believe the bridge may have been altered in the early 19th century.

The bridge lies on the Calder and Hebble Navigation, which runs for 21 miles from the Aire and Calder Navigation at Wakefield to Sowerby Bridge, and was one of the first navigable waterways into the Pennines. It was surveyed, planned, designed and constructed under the management of Leeds born John Smeaton, and later James Brindley.

The huge stone copings and the dressed stones over the arches, known as voussoirs, are likely to have been quarried locally, and details such as the remains of cast iron rope rollers which allowed the boat tow ropes to run smoothly through the bridge, are damaged but one amazingly is still in situ. All these details will have to be taken down carefully as we want to re- use them in the new bridge. 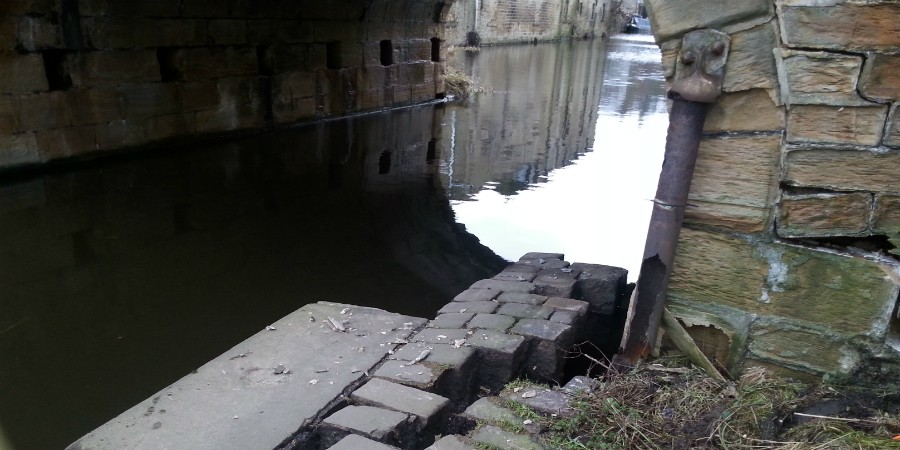 However before we start the demolition process, its crucial that we record everything, not only for the Canal & River Trust archive, but for the public record. Historic England Level 3 recording and laser scanning has been commissioned and Marcus and Anna from Arc Heritage have carried out the recording this week, braving further wind and rain to complete the work. Once finished, copies of the report will be lodged with the West Yorkshire Historic Environment Record.