In the days when gas was obtained from coal, one of the by-products of this process was tar. Thomas Clayton (Oldbury) Ltd operated a fleet of narrow boats which transported gas tar from gas works throughout the country to tar distillers, which converted the tar into useful and valuable chemicals. Midland Tar Distilleries, whose premises were situated close to Clayton's base in Oldbury received the bulk of their tar in the West Midlands.

By the 1960s, the closure of local gas works, traffic had declined due to the introduction of cheaper North Sea gas and the company could see no hope of any increase. No new boats had been purchased for 30 years and costs of repairs, which had been kept to an absolute minimum, were rising.

As far as Claytons were concerned, it was fortuitous that in the 1960s, the motorway network in England was being developed and it was planned that an elevated section of the M5 would pass over Claytons' premises, obliterating it. A compulsory purchase order was issued by the Ministry of Transport for the Clayton's site.

The date of closure of the canal carrying business was set at 31 March, 1966. Boat repair business would continue for a period, but the whole of the premises was to be vacated in August or September 1966. The last load of tar was delivered there from the Walsall gas works in the motor boat Stour.

Where is Stour now?

Stour is now preserved at the Black Country Living Museum. At the National Waterways Museum Ellesmere Port, you can see one of Thomas Clayton’s other boats Gifford which until the 1940’s also carried gas tar to Oldbury in the West Midlands as well as to other locations. 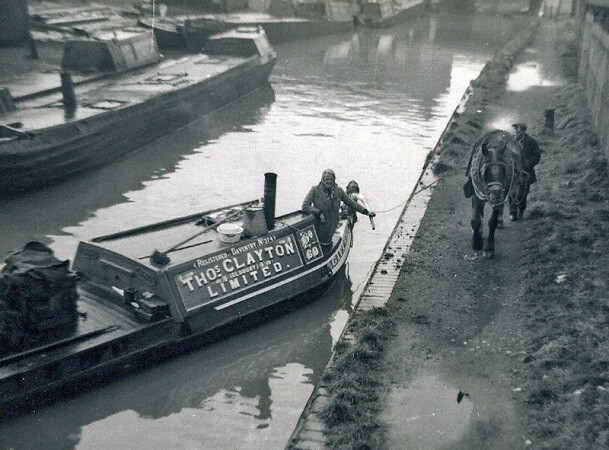 You can read more about Thomas Clayton (Oldbury) Limited in Waterways Journal Volume 22.  The company records that survived were donated to the Waterways Archive at Ellesmere Port. This overview follows the Company’s development, operations and final closure of this family run organisation from its formation in 1904 until it went into voluntary liquidation in 1979, by which time it had long finished carrying.

Volume 22 can be purchased from the museum shop or through mail order.  Please send a cheque for £10.99 (includes P&P) made payable to the Canal & River Trust along with your name and address to the National Waterways Museum, South Pier Road, Ellesmere Port CH65 4FW.  Alternatively, you can ring and place your order using a debit/credit card – 0151 355 5017.