Bells were first cast in China in 2000BC but recorded in churches about 400AD, when missionaries began using hand bells to call people to worship and by 680AD bells were being hung in many church towers around the country.  In the 17th Century, bell ringing became rather fashionable and villages began competing to out-ring each other, often using hand bells to practise on to save standing in the chilly belfry.  But by the 18th Century, it had become the pastime of layabouts & drunks!  It was not until the Victorian era that the Churches reclaimed their bells and the standard of ringer improved!  Bells were silenced during the World Wars (with the exception to warn of an invasion) and their popularity grew once more in the 1950’s.  For the Millennium, a £3m lottery grant funded 150 bell projects and 95% of church bells rang on the 1st January 2000.  Interest grew again for the London 2012 Olympics with the Olympic Bell (at 23 tonnes it is the largest harmonically tuned bell in the world) being a big part of the celebrations.  For over 100 years hand bell groups have been competitively ringing and attracting large audiences.  No doubt many of you enjoyed watching Gay & Alan, the hand bell ringing couple on ITV’s Britain’s Got Talent!

So let’s begin by ringing in 2016 with bells a-peal-ing and wishing a Happy New Year to you all!

Assuming I haven’t dropped a clanger during my bell history, let’s get off to a real ding dong by celebrating a successful year of volunteering in the SE Waterway…

2015 culminated with the annual Volunteer Get-Together event at Stoke Bruerne, which was held on Saturday 12th December.  Volunteers from many of the region’s fourteen Adoption groups joined colleagues from other contingents - such as the Museum volunteers, the Explorers, Visitor Mooring Rangers and Welcome Station volunteers - to mix and mingle in a friendly, informal setting.  After everyone had enjoyed tea, coffee, mince pies and Christmas cake, the annual Volunteer Organisation Recognition Award (VORA) was presented to Buckingham Canal Society.  This is in recognition of their many achievements in restoring and maintaining the Buckingham Arm.  Athina Beckett from Buckingham Canal Society said:

“I would like to express how much winning the Volunteer Organisation Recognition Award has meant to our trustees and volunteers. We held another task party at the weekend, and before the work started I was able to show the group the shield and certificate we’ve received and thank them for all the hard work which has been carried out this year.  Everyone is thrilled and delighted to have been recognised for their efforts by the Canal & River Trust.”

Below shows the volunteers with their award during the subsequent task day, filling pot-holes on the increasingly bumpy Lock Lane in Cosgrove (for which they received many Thank Yous and even a round of coffee from locals!).

Ringing in the New Year was the Northampton branch of the IWA who continued with their ambitious plan to clear seventeen by-weirs along the Northampton Arm this winter by wielding slashers with bells on and strimmers twice a month.  This is of huge value to the local Canal & River Trust team, for whom it not only saves a time consuming job, but makes inspection of these heritage brick structures considerably easier, as these photos show.  Here is group leader Geoff Wood’s report:

“We had a good day again with 14 volunteers turning out.  We completed locks 4 & 5 by-pass weirs and channels and about three quarters of lock 8.  This was a monster as it was covered with brambles from one end to the other.  Lock 3 by-pass weir and channel just needed a trim as we worked on this earlier in the year.  We also litter picked from lock 1 to the M1 bridge.”

The Aylesbury Towpath Taskforce volunteers were summoned by the bell as they continue to undertake monthly task days along the Aylesbury Arm.  Aided by local Customer Ops member, Paul Bird, the team undertook deep clean litter pick followed by well-earned mince pies!  In the winter you would usually expect more litter to be found as the vegetation is died back, but this group are finding less and less which shows that the reverberations of their hard work and dedication in tackling anti-social behaviour is really paying off!  Top job!

In early December, Stoke Bruerne Canal Partnership cleared vegetation around the top lock and made final touches to their new bells & whistles interpretation panels.  This was in preparation for a day of festivities which included the official unveiling of said panels, which have been designed & installed by local volunteers; the opening of a stained-glass workshop and the ever-popular Illuminated Boats Parade.

Mid-way through December, Crick Parish Council - in liaison with the CRT’s local Customer Operations team – brought together a group of volunteers to upgrade a stretch of towpath along the Grand Union’s Leicester line.  Over 2 days the group were ringing the changes by deploying twenty tonnes of gravel to fill a series of pot-holes.  Successfully avoiding disturbing the water voles and otters in the area, the volunteers managed to create a safe, level surface for the benefit of walkers, cyclists, anglers, boaters and other visitors. 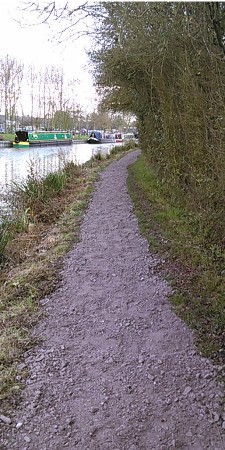 Over the first weekend in December, the first of the region’s Stoppage Open Days took place in Banbury Town Centre.  Local Volunteer Lock Keepers and Visitor Mooring Rangers joined their Customer Operations colleagues to welcome hundreds of visitors to the site.  Development & Engagement Manager Sarah Brown chimes in with the following summary:

“In total, over the weekend we had a whopping 1481 visitors who came to explore Banbury Town Lock at our open event.  Several visitors thanked us for the opportunity to see the Oxford Canal in a new light.  One lady came along to see the lock wall her grandfather rebuilt after the lock was bombed during the war.

“The majority of people had seen the news articles on BBC South Today, BBC Radio Oxford and in the Banbury Guardian.  In addition to the press we had on Friday, BBC news are preparing a web article and we had a visit on Saturday from a Boating Vlogger – who will feature the open day on his blog.

“I would like to thank all staff and volunteers for their enthusiastic support of this event, engaging visitors in the work that we do and ensuring that everyone had an enjoyable and safe journey into the lock.” 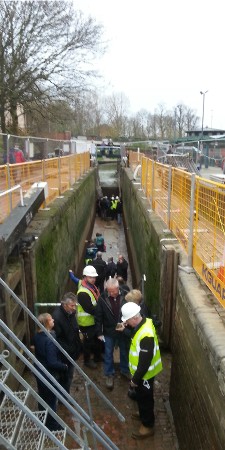 Adoption group Friends of Dudswell (near Berkhamsted) planted 50 hedging whips this month.  Group leader Bob Farrer was saved by the bell when he acquired them for free thanks to TCV who had 95,000 hedge whips available for community groups.  Planting in double staggered rows, Bob and his volunteers have closed up some large gaps created by short-cuts being taken by vehicles to the towpath!  Well done all, a hedge for the future!

We consider ourselves very lucky that most of our Volunteer Lock Keepers return season after season.  Alarm bells rang though when John Waters who has volunteered at Soulbury 3 Locks near Leighton Buzzard for the past 2 seasons said he would not be returning.  Read why, in this quirky article in the CAMRA newsletter (on Page 25).  Good luck John and Happy Sailing!

The bells have rung ‘time’ for John Highmore, Volunteer Development Coordinator, who has departed the Canal & River Trust after three years and four months in post.  But bells can also celebrate his important part in shaping the way volunteering works within the South East Waterway.  John was a highly valued member of the team and is a friend to many.  We wish him the very best of luck in his new job. 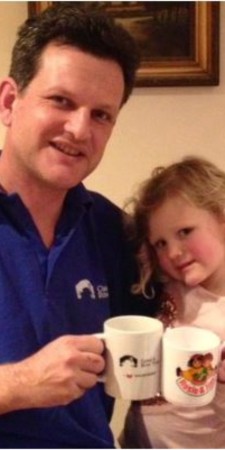 I hope this month’s blog has rung your bell.  Let’s decrescendo now with a well-known rhyme which was sung on festival days, accompanied by the ringing of church bells:

Oranges and lemons, Say the bells of St. Clement's.

You owe me five farthings, Say the bells of St. Martin's.

When will you pay me? Say the bells of Old Bailey.

When I grow rich, Say the bells of Shoreditch.

When will that be? Say the bells of Stepney.

I do not know, Says the great bell of Bow.

Every month, dozens of groups and individuals give up their time to help make the canals a nicer place for everyone to enjoy. From hauling trolleys out of the water to lock keeping and giving tours of empty locks, our volunteers are an amazing asset and well worth celebrating.