Hidden away on the Stainforth & Keadby Canal is an extraordinary sliding railway bridge that carries an operational railway line at a skewed angle across the waterway. 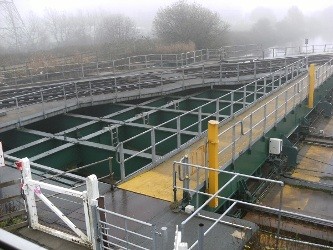 A railway swing bridge crossing existed here as long ago as 1866. In time, this was superseded by the first sliding bridge at this location, built for the Great Central Railway’s Scunthorpe line in 1925. This bridge was designed by Sir William Arrol & Company of Dalmarnock.

The 1925 bridge was replaced in 2004 by the present, low-lying, sliding bridge. To allow boats to pass, the whole deck of the bridge which carries two tracks, slides sideways on rails and is pulled by steel cables. The bridge construction is an open riveted steel framework and incorporates two walkways, so that pedestrians can cross when the bridge is in open or closed position.

The modern bridge is powered by mains electricity, although interestingly the 1925 bridge was operated with a massive set of batteries.

The railway line is a busy one and boaters must wait until there is a long enough gap between trains for the operator in the adjacent signal box to open the bridge.

Vazon is not quite unique; there is another sliding bridge across the Ulverston Canal in Cumbria; but that one, like the canal itself, is now disused.