There’s a disused tunnel in Cumbria at a remote hamlet called World’s End, which is worth a visit if you can find it. It’s called Hincaster Tunnel and it stands in splendid isolation towards the top end of the Lancaster Canal.

The canal was once much busier; in the 19th century  passenger-carrying packet boats operated between Preston and Kendal and a contemporary print shows one of these boats approaching Hincaster Tunnel. Packet boats needed fresh horses every four miles and a former canal house with attached stables still stands to the west of the empty canal bed here. 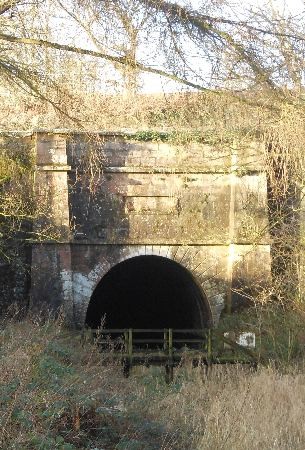 The tunnel has an impressive bore and once had a wall-mounted chain for hauling boats, but no internal towpath. Instead a secretive horse-path with stone walls and mini accommodation bridges winds upwards over the fields. In December it is often dusted with snow and offers views of distant white-topped hills.

Hincaster Tunnel was designed by Thomas Fletcher (c1770-1851) with William Crosley as resident engineer. It has nicely dressed limestone portals with blank panels that may originally have been intended for inscription. At 346 metres long it is dead straight and lined with around four million bricks that were made locally, specifically for the tunnel project. The tunnel took four years to build and was completed, with a fitting sense of occasion, on Christmas Day, 1817.