Cathedral of the canals

Braunston in Northamptonshire is a canal village. Here, generations of people have lived, worked and died in the service of the waterways. Their names are recorded in the parish registers and many were buried in the churchyard of All Saints’ Church. 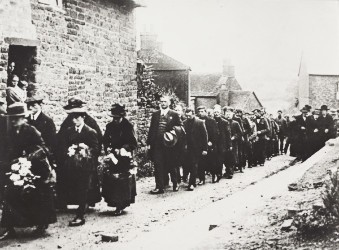 In July 1774 the baptism of a child of a ‘Navigator’ is recorded; the same year that saw the Oxford Canal arrive and with it the first coal carrying boats. The Grand Junction Canal came to Braunston in 1796. In the 19th century the canal companies, boatyards and carrying fleets centred on Braunston employed large numbers of men; in 1831 20 of Braunston’s 287 households were occupied by boatmen’s families. In 1834 a Braunston boatman died of cholera, which spread to 70 further people and resulted in 19 deaths.

The 20th Century, to begin with at least, saw a similar pattern of settlement; in 1923 a photograph records the funeral of a boatman during the Boat Strike of that year and in 1927 Thomas Cope the Canal Clerk who lived at the Stop House, was buried. As recently as 1998, Arthur Bray, one of the very last of the old working canal boatmen died at Braunston.

The present All Saints’ Church was built in 1849, with the Oxford Canal Company contributing to its cost, such was the close relationship of Braunston village to its waterways. Although its cemetery remains open, the churchyard closed in around 1960 and many of its earlier headstones were removed. Their names live on in the parish registers, but perhaps the most fitting memorial to the boatmen and their families is the hilltop church of All Saints’, which came to be referred to as the Cathedral of the Canals.