Was our greatest Briton an angler?

I didn't think much of that Churchill film 'Darkest Hour', even if it did win a couple of Oscars. I watched it all the way through, and not a thing about him going fishing.

I'm not talking about Winnie rowing out into the lake at his Blenheim Palace home, which isn’t that far away from the Oxford Canal and knocking out a few roach and tench either. I wanted to see him fishing with the American President Franklin D Roosevelt in the dark days of the Second World War – or the time he caught a marlin.

Not a lot of people know this, but Churchill enjoyed fishing as a relaxation from affairs of state. In 1949, for example, before attending the first Council of Europe meeting in Strasbourg, he spent a few weeks painting, working on his memoirs – and fishing on Lake Garda, a venue that has subsequently hosted the world angling championships.

Fishing with the president

What difference did that meeting with President Roosevelt make to the outcome of the Second World War? The time: May 1943, the month of the Dambuster raids. Churchill had travelled to the US to address a meeting of Congress, but he also spent a weekend chatting to Roosevelt at the president's secret retreat in Maryland.

Churchill wrote in his War Memoirs: "On Sunday the President wanted to fish in a stream which flowed through lovely woods. He was placed with great care by the side of a pool, and sought to entice the nimble and wily fish.

"I tried for some time myself at other spots. No fish were caught, but he seemed to enjoy it very much, and was in great spirits for the rest of the day."

Roosevelt has contracted polio in his late 30s. Despite his disability he clearly found fishing and being by water to be a great benefit to his health in what by any stretch of the imagination must have been a time of substantial stress.

Nor were mosquitoes a problem on that fishing trip. Naval aide William Rigdon recalled: "The cigars created enough of a screen to protect both of them."

Nonetheless, a blank. But we've all had them. And after all, with how to win a war at the top of his agenda, you could forgive him for missing a few bites.

But Churchill didn't come away empty-handed when he fished off California's Catalina Island in 1929. He was on a hectic American schedule and only had time for an afternoon's fishing. He was Chancellor of the Exchequer at the time and that was the year of the beginning of the Wall Street Crash. Within an hour of leaving harbour, he had hooked a 188lb striped marlin, which he landed 24 minutes later – despite wearing a three-piece suit, a bow tie and puffing away on a cigar. A Churchillian achievement indeed. 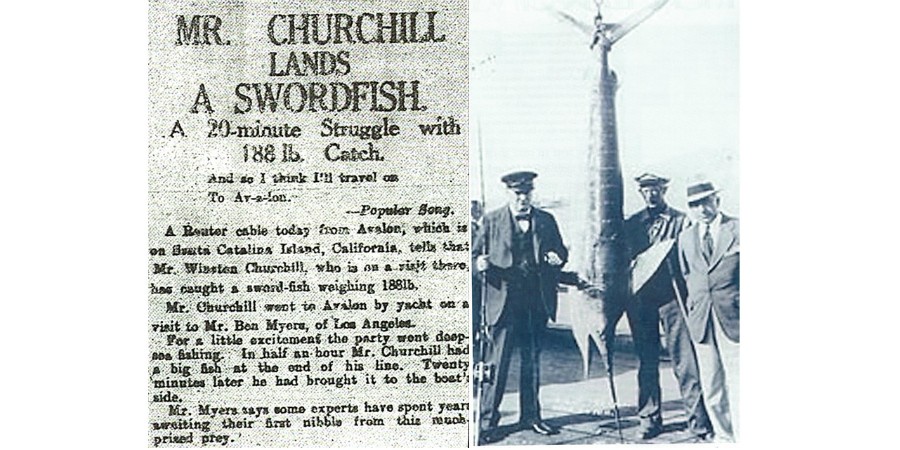 He later showed his appreciation to the Tuna Club of Avalon, which had hosted him, by buying a big-game gaff from sports outfitters Abercrombie & Fitch, and sending it to the club with his thanks. It's still there today, housed in a glass case in the clubhouse. So that's the sort of thing that the film missed out on. And I wonder if he was thinking about a spot of cod fishing when he talked about fighting them on the beaches? He certainly believed in the value of fish and chips to the spirit of the nation as they were not subject to rationing during the war period.

If Winston was still with us today, it’s unlikely he would have remained silent on Brexit. For the future direction of Europe occupied much of his working life. Whatever your views on that particular topic, I feel sure Winston would have appreciated the importance of the modern-day canals as places to make all of our lives better.