Previously, we explored the contribution recently retired East Midland partnership board member, Glyn Williams, made to angling. Here, we look at the achievements of some of the young angling talent Glyn has unearthed from the Nottinghamshire area.

Webster on the world stage

One of the many important milestones in his career was when Glyn and his wife Anne personally witnessed junior squad member Colin Webster representing his country in the successful squad that took the team gold medal in the World Youth Championships in 1998. This match was staged on the Rowing Course at Ghent in Belgium. It was a sign of things to come for the England team. 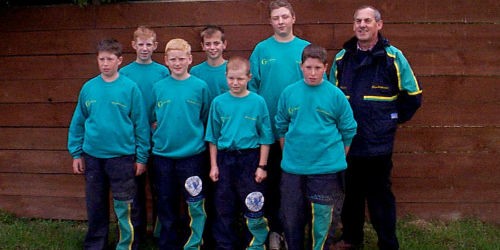 Most of the squad members who were part of this record breaking achievement were either actively involved with or had passed through the Junior Triathlon competitions, an accolade that made Glyn feel so proud.

Another noticeable activity that Glyn was proud to be involved with was forging links and creating angling courses for the Redlands Junior School and Portland Comprehensive School in Worksop. Portland School subsequently became the national school champions on numerous occasions. 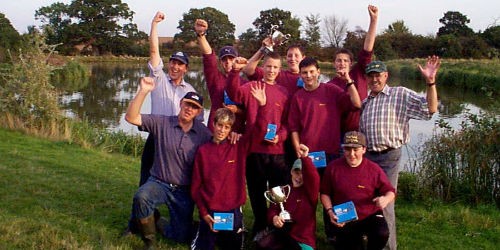 The picture shows Glyn and his assistant coach, Ken Stevenson, with the successful Portland School Squad members of 2001 along with Roy Marlow, fishery owner of the Glebe Fishery in Leicestershire.

Probably one of the most opportunist and rewarding moments of Glyn’s coaching career was when in 1999 the mother of a young local lad introduced Glyn to her young son who attended one of his angling taster sessions at Shireoaks, near Worksop. From the word go, it was obvious to Glyn that, even at eight years of age, this youngster possessed great potential.

Glyn took him under his wing and within two years the young fellow was competing in the very first NFA Cadet National. The match venue, Bargate Drains, near Boston, where the youngster took the individual bronze medal, helping Worksop & District Angling Association to win the Cadets Team gold medal. The youngsters name was Matthew Godfrey. The pictures shows Matt with sister Hannah and friend Eleanor.

Under Glyn’s guidance and coupled with the brilliant support of Matthews parents, Andrea and Kevin and other members of their family, Matthew’s fishing skills improved in leaps and bounds. In 2004, Glyn eventually decided to nominate the young Matthew for England trials. Over the next four years Matthew went on to become the triple Under 18s world champion. The picture shows his first success in 2005 in Serbia, aged just 14. Matt repeated his success in 2007 when the event was held in the Czech Republic and triumphed for a third time in 2008 on the Rowing Course in Ghent, Belgium - see picture below. Matt then progressed to represent the Under 21s England international team.

Matthew is now 26 years of age and is already a regular member of the full international squad, having represented England in the 2016 and 2017 European championships and the 2016 Home Internationals where he took individual silver and a team gold medal. Since joining Barnsley Blacks, honours already secured include a Division One national team winner’s medal from 2016 and world club championship team gold in 2017, to add to the bronze secured back in 2015. Matthew also has two winter league winners’ medals and two commercial national championship medals. He has become a well-known angling correspondent and employee of Tackle Guru, a major tackle supplier.

Over his long career, Glyn’s principal mentors were Gerald Rollinson, former secretary of Worksop & District Anglers Association and, briefly, president of the National Federation of Anglers, David Kent. Glyn states ‘I have learnt so much from these two individuals, which definitely helped me to achieve the many accolades that have come my way during the past 30 years in the angling world’.

Glyn went on to add ‘two other individuals that I have total respect and admiration for are Alan and Sandra Scotthorne. This is not just because of their fantastic achievements while competing in the World and European Championship competitions but also for the help and support they have conveyed over the years to Worksop & District Angling Association’s cadet, junior and intermediate sections. They really are a credit to the sport of angling’.