Lynne Baxter: my life in fishing

Who could have imagined that the coarse fishing scene of today could have changed so dramatically since my first forays into the match world back in the 1980s.

Rivers were ‘king’ then, the River Trent and River Witham for example, and they were ‘matched up’ to the hilt every weekend. Winning nets of fish typically ranged from around 5lb up to 12lb of roach, or anything from 12lb to 30lb-plus of bream, or combinations of same.

Hundreds of men (and a mere handful of us ladies) lined up for the draw in pubs local to the venue, all keen to pull out a peg showing good form. The testosterone ran free. It was always a good laugh, listening to the one-upmanship; guys proudly describing their good catches while glossing over the bad ones. I mostly felt welcome though I got a few sideways glances from whichever man drew beside me. Their big fear, or for some worst nightmare, was they didn’t want to be ‘woman licked’.

As a child, I had been lucky enough to live beside a river in the summer holidays. My grandma lived in Edale, Derbyshire, and the River Noe ran adjacent to her garden. Dad taught me, and my twin brother Mark, to sneak up to the bankside and lie face down watching the trout. We’d also wade in the river and, with gasps of delight, catch bullheads by carefully lifting pebbles.

But the ultimate prize came from mastering the technique of tickling trout. Outstretching an arm downwards right up to the shoulder from an undercut bank, we’d move our fingers until we touched something silky smooth. This was the chance to gently tickle the trout with fingertips until it became mesmerised, before grabbing the fish and beaching him. I guess we are all the product of our past experiences; I have always loved biology and became a teacher of the subject. Oh and by the way, trout tickling is no longer legal.

But back to my match fishing apprenticeship. I met Jim in March 1984 and we married in August. Jim was a very good teacher and I learnt at Damflask Reservoir. It’s a venue that the great World Champion, Billy Lane said was the most difficult water he’d ever fished after catching two roach in a session there. Size 24 hooks to 12oz line was the standard end tackle to catch anything, but I learnt how to catch a few and fell in love with the place. My best ‘Flask roach’ of 2lb 9oz came some years later on a 24 hook. 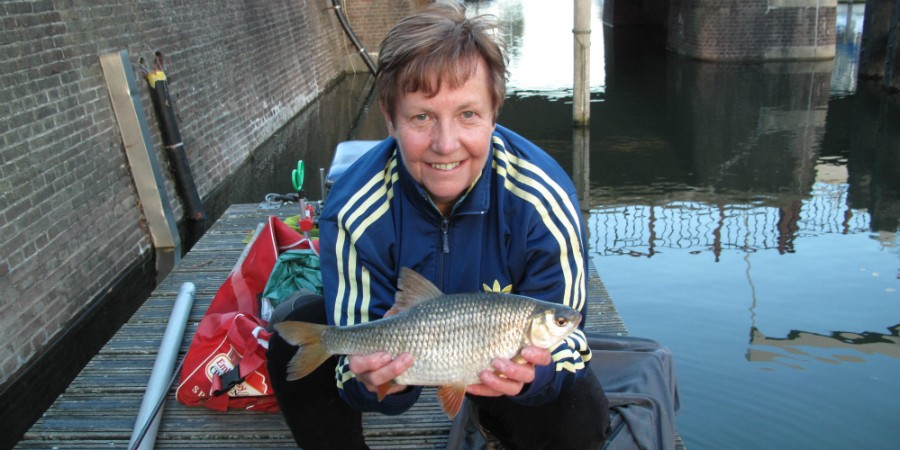 My first match was the Damflask autumn sweepstake in 1985 which Jim later described as ‘letting me loose in open matches’. I joined this 100-peg match with another Sheffield husband and wife angling ‘team’, Brian and Pat Needham. I drew a deep peg on the ‘quarry’ section and, fishing waggler as deep as I could, took nearly 4lb of roach to finish fourth. Beginner’s luck or not, Jim was well chuffed to hear of it when he returned from his own match.

In 1987, I entered my second Ladies National Championships on the Suffolk Stour. I travelled down with Brian and Pat Needham, Pat being the reigning Ladies champion after winning the ’86 event on the Warks Avon. I remember saying to Jim, who’d earlier booked on at Rudyard Lake: ‘you win your match and I’ll win mine’. As my fishing diary reminds me, 117 ladies fished and I drew peg 98 on the Stratford St. Mary stretch. The peg looked ‘chubby’ but the water was clear and slow flowing. I decided to feed very carefully, while setting up a small waggler with three no. 10 shots down the line, plus stick float and leger rigs.

Feeding five or six maggots per cast, I alternated swims with the waggler and caught small fish in short bursts of activity. In the second half of the match I learnt that the slow flow on my near line allowed me to hold the waggler back until it dragged under by up to 6’’, presenting the bait almost laid-on. I could still see the float tip clearly sub-surface and the bites became far more positive this way. I ended up with 50-60 fish including five in a busy last few minutes, for a level 5 lbs. The late fish were key to me beating York’s Rita Bell at the next peg, who weighed 1 3/4oz less, to take the title. I took home a bundle of prizes from sponsors Calor including an ASI seat box. Jim also won at Rudyard to make it a special day.

Lucas to the sword

With the confidence this win brought, I entered 42 matches in the ’87 season on various venues including Rudyard Lake. One Rudyard match stands out when drawn next to Mark Lucas. Mark was in the habit of boasting before a match, telling rivals in the draw queue how he was going to win it. He was known for attacking his peg, and promptly ‘filled it in’ with groundbait. He caught 4lb on pole in the first hour but his swim died, and this was a 6-hour match. I just plugged away on wag and mag and caught steadily all day, topping his weight to my delight. Rudyard lent itself to waggler for roach and I had a few good finishes topped by a second that year.

The Trent, particularly at Long Higgin, became another favourite water. I loved stick float fishing and the chance of a large chub turning up at any time. On one memorable match, I was drawn 94 in Manvers Field, upstream of the infamous ‘big Bob’ Walker, a Barnsley Black team angler. Now Bob’s ability isn’t in question, he’s won his share in the classy Burton Joyce Opens and plenty more, but he could be loud and a bit cantankerous.

He was setting up his platform when I arrived, unseen at my peg, whereupon, amidst some moaning and groaning, he sat on his platform only for one leg to collapse and tip him neatly into the river! The air turned blue as he climbed out, soaking wet. On seeing me, his face turned red when he realised a female had appeared next door. Credit to him for fishing on for 8lb-plus, but I ended up second with 11lb 15oz from a 70 entry. Mark Pollard won the match with 13lb of skimmers.

The man in red

The River Witham also figured large for Jim and I for many years, up to and beyond 1989 when the first of our two girls was born. We’d load the kids in the back of our white van and set off to the river most Sundays. I once drew above ‘the man in red’ - the late Trentman, Jan Porter, on peg 34 at Kirkstead. I set up my waggler with four no. 8 shot down and bronze maggot on a 22 hook; he fished the pole. I ended up with 9-13 to Jan’s 6-10, and got sixth from 75 anglers. Such a friendly guy, he took it well, joking at the end with the words: ‘I felt my bottle draining away’.

But of all my match results the 1988 Cutlers Arms Winter League (44 fishing over 10 matches) probably ranks with my best for satisfaction. It was fished in such a good spirit all though and resulted in a four-way tie on 58 points which left me third overall on weight countback. Some excellent Sheffield anglers fished that league on the Trent and Fossdyke Navigation, including winner John Bell, his talented teenage lad Tony (seventh), and experienced National Champs team men of the calibre of Trevor Leigh (fourth) and Dave Pearson (sixth).

I fished trials and gained selection for the squad to fish in the first Ladies World Championships in Bulgaria in 1994. I wasn’t fishing as much by then and in hindsight had perhaps lost some confidence. Sandra Halkon-Hunt, Anne Pickering, Lynda Day, Wendy Locker and Wendy Lythgoe made the team and I was named as reserve. It was a great experience and we finished up taking bronze behind Italy and Germany. These days I play golf but still like to fish occasionally, purely for pleasure, be it for summer carp or silver fish at local venues.