Are the best salmon anglers female?

Amusing, annoying, irritating, delightful and astonishing are just a few of the emotions that have been expressed whenever certain facts regarding catches of salmon by women are discussed.

It’s been claimed that women have caught the biggest individual salmon, the largest numbers of salmon in a day and that women can often find a fish or two on days when the male of the species fails dismally. Are these things true and if so, is there an explanation for them?

During the 1920s women anglers established three British records that will almost certainly never be beaten. From the mighty River Tay back in October of 1922, Georgina Ballantine landed the UK rod caught record salmon of 64 lbs.This wasn’t a one-off fluke catch. For it took Miss Ballantine around two hours to play and land this fish. Earlier that day, Georgina had also caught fish of 25 lbs, 21 lbs and17 lbs, so she was a true salmon fishing expert and this despite the handicap of suffering from osteoarthritis. 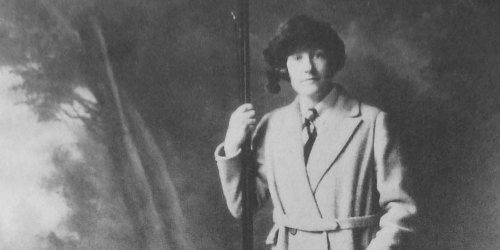 In October 1924, Mrs Clementina (Tiny) Morrison caught a 61 lbs salmon in October from the River Deveron. It remains the latest salmon caught on the fly in the UK and wasn’t weighed for 24 hours after capture. It would have tipped the scales at 62 lbs, if not 63 lbs, when first landed. The possibility of losing the record certainly made Miss Ballantine nervous, as scribbled in the margins of her copy of Fishing Gazette is a note ‘dangerously near the mark’.

On 13 March 1923, Miss Doreen Davey caught the record ever spring salmon which weighed in at 59.5 lbs from the River Wye. Her father owned the Lower Winforton waters and the young Doreen first picked up a fishing rod aged just five. She hooked the male fish at 5.40 pm and landed it at 7.35 pm. The fish was briefly displayed in Hereford and the flesh sold with the money received being donated to Herefordshire General Hospital.

On 15 February 1935, Lady Joan Joicey made a remarkable catch of 26 salmon and two sea trout in one session, while her husband managed to land just seven. Gladys Blanche Huntingdon landed no fewer than 300 salmon in her career. The record salmon for the Yorkshire Esk was landed in 1963 by Ivy Hayton. This just touches the surface of the role of women in the annals of salmon fishing history. You could write a book on the exploits of female salmon anglers, indeed Wilma Paterson and Professor Peter Behan did just that, publishing the excellent Salmon & Women in 1990. It is forwarded by the great Hugh Falkus.

Back in the 1960s, a male fisheries scientist in the USA first noticed a strange phenomenon. When he placed one of his fingers at the head of the fish pass, salmon and steelhead (migratory rainbow trout) would not enter the fish pass for at least 30 minutes. He wasn’t keen on demonstrating this too often as it would delay fish passage at optimal times. One day, a lady visitor volunteered to put her fingers into the water. The fish headed upstream without hesitation or agitation. But minutes later, when the male scientist put his finger into the water at precisely the same spot, the fish became agitated within a few seconds and swam back down the fish pass.

What was going on here? Was the lady producing a chemical that fish could detect and found attractive or was the man producing a chemical that had a negative impact on fish. Scientific knowledge about a family of chemicals called pheromones, which organisms can detect at very low concentrations, is gradually being unearthed. Pheromones are common throughout the natural world. But can a woman made chemical really be responsible for female angling success when pursuing the mighty salmon? It’s one thing to potentially attract the interest of the fish, it’s another thing entirely to cast the bait in exactly the right spot and then play the hooked fish for up to two hours as was the case in some of the epic battles with those giant fish.

Catching more fish – is it down to pheromones or the skill of the angler?

The evidence does point to the conclusion that female salmon anglers are more successful than their male colleagues. The well known salmon angler and author Hugh Falkus states ‘female anglers have a different way of seeing things and are more capable of adapting to crazy situations; they fish with utter determination and nothing diminishes their concentration. They will stick it out, refusing to be beaten’.

Eddie McCarthy, fishery superintendent of the River Thurso states ‘women are much more attentive and 90% easier to teach than men. What’s more, they retain what they have been taught better than men do.’

Falkus went on to say ‘if my life was at stake, I would fish against anyone male or female, but if it were a team match, I would unhesitatingly choose a team of women.

Pheromones may play a role, but the most likely conclusion to explain their success seems to be that women anglers are simply more skilful. What do you think?