Wasp grub has long been thought of as a summer bait for catching chub, and trout are fans too. The great Jim Bazley, winner of the All England championships in 1909 and 1926, described wasp grub as being "like plum duff amongst a lot of schoolboys".

It's not a bait that you'll find in your local tackle shop though. To acquire the grubs and cake you need to unearth a wasps’ nest.

Tracking down a wasps’ nest

Most of the skills needed to find nests are slowly being lost and we're grateful to Gloucester legend Max Winters for his help with this article.

The nests tend to be found near hedgerows, and the entrance hole will always be facing the morning sun on the eastern side of the hedge. Look out for wasps flying around 20 feet up in the air with dirt between their legs. The nest will be nearby, as these wasps are depositing the soil away from the nest.

Once the entrance has been found you need to apply the appropriate wasp nest powder from a reputable supplier around dusk time. The nest should be dug up the next morning. We suggest you get advice around the safety aspects of acquiring wasps’ nests. 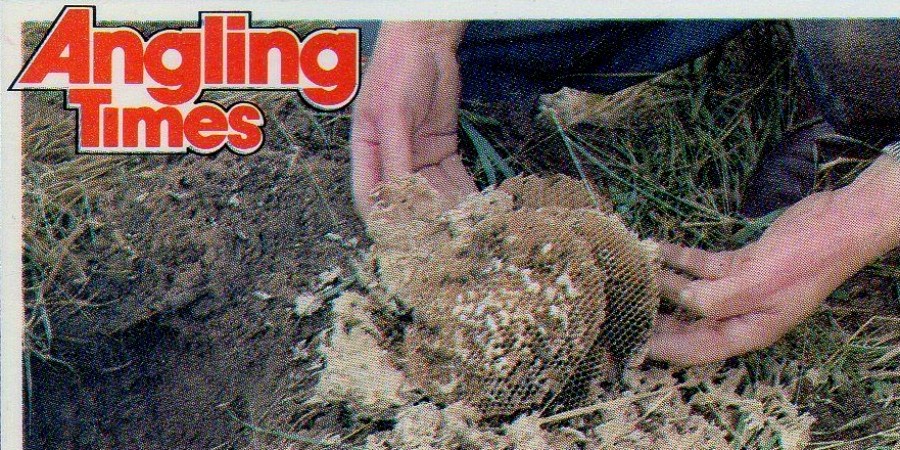 How to prepare wasp grub

The grubs (immature wasps) are used as hookbait and the cake is typically used in the groundbait mix. The cake is sweet and chub cannot resist it.

Max would remove the best grubs for the hook, with a bonus being that from August onwards you might find immature queens that are twice the size of normal grubs. As summer moves towards autumn, there are fewer unhatched grubs left in the nest.

Max’s method of preparing the cake groundbait was take a three-gallon maggot container, put the cake with remaining grubs into the container and add a kettle full of boiling water to kill the grubs. Then add groundbait, which back in the day was typically brown crumb. Mix it until the right consistency is reached. You need to be able to make a ball that can be thrown without breaking up in mid-air and that will also sink before breaking up. Usually on larger rivers you would be fishing at distance to the chub holding areas, such as overhanging trees.

How to fish with the wasp grub

Wasp grub fishing is the other end of the scale when compared to the finesse involved in squatts and pinkie or bloodworm and joker fishing. It’s a win or bust method for the match-man. Here are Max’s top tips.

How to store wasp grub between fishing sessions

The cake can be bagged and placed in the freezer, for use later. Be sure to add a label so that it's not inadvertently added to some recipe or other by another member of the household.

There is a long history of the use of wasp grub for chub, which can be traced back as far as the writings of Dame Juliana Berners, who described it as ‘the honeycomb’. There is also a history of successful baits such as hemp and bloodworm and joker being subject to bans. Wasp grub has suffered the same fate.

It was banned on the River Trent and Burton Joyce after John Howard won numerous matches using the method. On the Severn match circuit, Max along with Clive Smith and Tony Davies, to name but three, achieved notable success on the ‘grub’. Max feels it’s a shame that modern anglers don’t give it a go more often these days, for it’s a way in which the average match angler can triumph over the very best.