Within the Environment Agency (EA), National Fisheries Services (NFS) Brampton are at the forefront of detecting new and emerging diseases in our fisheries. Controls are in place to prevent the spread of CEV and efforts are underway to improve our understanding of this important pathogen.

Between April and October 2012, NFS Brampton were notified of four unusual carp mortalities in the south east of England. All four waters were within a five-mile radius and shared similar characteristics of lethargic fish and significant losses.

In November 2012, a similar case in the Midlands was also reported. Laboratory investigations confirmed serious pathological changes and resulted in the detection of Carp Edema Virus (CEV).

These represent the first records of this virus in UK carp fisheries. Work is underway in collaboration with virologists at the Centre for Environment, Fisheries and Aquaculture Science (Cefas) to progress our understanding of this virus and the risk it poses to our fisheries.

Effective management of new and emerging diseases relies on early detection, and prompt control measures and regulations. To minimise the risk of disease transfer to other fisheries, the EA have placed controls on all CEV-infected waters preventing the movement of fish from these sites (although introductions into affected waters would be allowed). This decision is supported by colleagues at Cefas and the Department for Environment, Food & Rural Affairs (Defra).

Since 2012, NFS Brampton have investigated a number of carp mortalities where there have been suspicions of CEV and confirmed around 10 outbreaks in England.

Where did this virus originate from?

The virus isolated during carp mortality investigations in England is very similar to that which has been responsible for disease of koi carp in Japan. These have been known as Carp Edema, Viral Edema of Carp and Koi Sleepy Disease, but are now believed to be caused by the same virus.

CEV has also caused carp disease in numerous other European countries. It's likely the virus has spread through the international carp trade, although routes of introduction in to the UK are not yet confirmed. CEV is now considered to be one of the most important viral pathogens of carp.

Which fish are susceptible to CEV?

To date, CEV has only been reported in common carp and its ornamental variants like koi and ghost carp. No other fish species have been associated with this virus in our fisheries, and in the CEV waters sampled by our field-based fisheries teams, no other species have been visually affected.

What are the main signs of CEV?

Carp infected with CEV usually display two main characteristics. The first is lethargy, or 'sleepy' behaviour, with carp congregating around the margins or at the water surface and becoming increasingly unresponsive.

The second is severe gill pathology, with clubbing of the gill filaments, hyperplasia (cell proliferation), inflammation and cell death being observed.

These images show the gills in situ and a closer look at the issues: 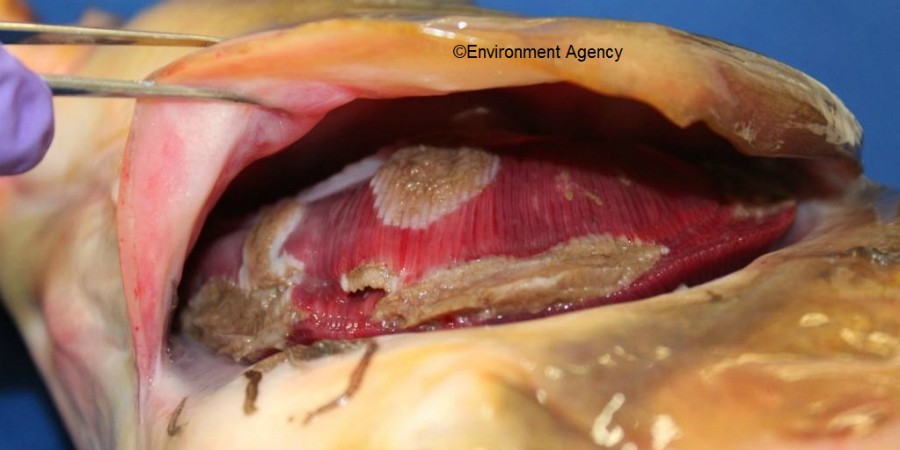 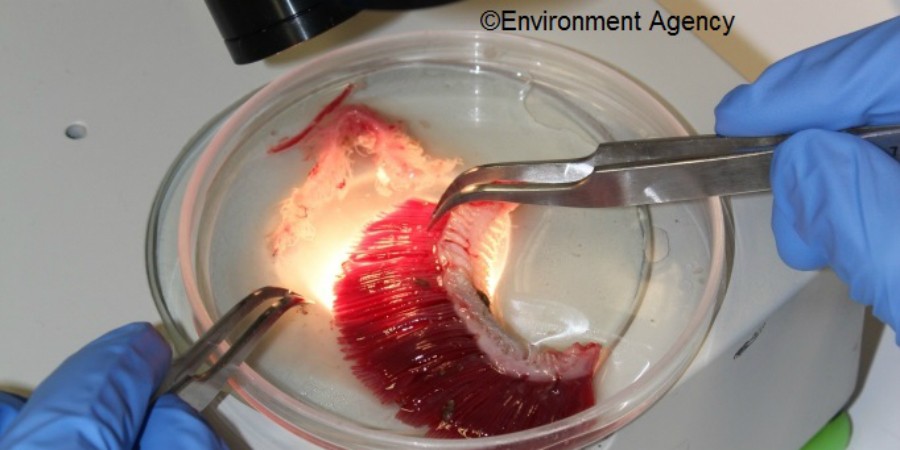 It is important to realise that lethargy and gill damage can be caused by a wide range of infections and environmental factors. As such, serious fish mortalities need detailed investigations combining thorough laboratory examinations and comprehensive assessments of fishery conditions, water quality and management practices. This information is vital to identify possible causes and rectify any fish disease problems.

In 2017, the EA were notified of a large-scale carp mortality at a well-known carp fishery in Greater London. Hundreds of carp up to 30lb were lost. Laboratory investigations conducted at Brampton confirmed severe pathological changes to the gills consistent with CEV and virology tests confirmed this virus. However, wider investigations at this water also revealed low dissolved oxygen levels and it is likely that the losses were down to a combination of the virus and environmental factors. This highlights the importance of combining laboratory and field observations, and not dealing with a pathogen in isolation.

What are the environmental triggers for CEV?

Viruses usually have an optimum temperature range where they become more active and cause disease. For many viruses it is the warming temperatures of spring and summer that act as a trigger. This has generally been the case in Japan, with CEV outbreaks reported between 15 and 23 degrees Celsius. In contrast, CEV has been detected in our fisheries almost all year round, with temperatures as low as 3 desgrees Celsius. Although the significance of CEV in cold water mortalities is still to be clarified, this wide temperature tolerance of the pathogen is concerning, with the potential for disease outbreaks year round.

How widespread is CEV?

Viruses can be difficult to detect, especially when they are in a latent phase and the fish appear healthy. It is possible that CEV is more widespread in the UK than the number of confirmed outbreaks suggests. Extreme caution must be taken to prevent further spread of this virus.

Work is also underway to see whether this virus could be responsible for Spring Carp Mortality Syndrome (SCMS). This condition was first identified by the EA in the late 1990s and it is feasible that CEV was responsible for some serious carp mortalities at this time.

Good biosecurity is key to preventing the introduction and spread of serious diseases. This involves care when stocking fish and measures to prevent the spread of pathogens with angling equipment, boots and vehicles. Always ‘check, clean and dry’ your fishing equipment. Fisheries can also use disinfectants for nets, slings and mats to help prevent the introduction of diseases.

What should I do if I suspect CEV?

Report any serious fish deaths or disease problems you encounter to your local EA fisheries officer immediately. These will be investigated promptly to assess the cause and to help put things right with the fishery. EA incident hotline: 0800 807 060

If you experience fish disease problems, or you would like more information about these conditions, please contact: