The world of the pumpkinseed

James Buckley explores the world of the pumpkinseed, a non-native fish species that most UK anglers will never have encountered.

James Buckley with a pumpkinseed

An introduction to the pumpkinseed

The pumpkinseed is also referred to as pond perch, common sunfish, punkys, sunny, and kivver. Pumpkinseed naturally occur in North America, in a range from New Brunswick down the east coast to South Carolina and then inland to the centre of North America and through Iowa and Pennsylvania. The pumpkinseed has now been introduced throughout most of North America but is still primarily found in north-eastern states. They can be found, however, in rare cases in the south western region of the USA.

In Europe, the pumpkinseed is considered an invasive species. They were introduced to European waters 100 years ago. In some suitable locations they are able to outcompete native fish species.

The pumpkinseed is typically 10 cm (4 inches) in length but the maximum recorded weight was 40 cm (16 inches) in America. They do not grow to a great size, with the current record for the state of South Carolina being 2 lbs 4 oz, whilst in other parts of the USA a pound fish could grab you a state record.

The pumpkinseed is one of the most vibrant of any freshwater fish and being green, orange, yellow or blue with speckles over their sides and back and a yellow-orange breast and belly, they stand out in clear water. Their sides are covered with vertical bars that are a faint green or blue and they have an orange-red spot on the margin of its black gill cover. The pectoral fins of a pumpkinseed can be amber or clear and they have a small mouth with the upper jaw stopping under the fish’s eye.

The pumpkinseed feeds on both surface and bottom dwelling organisms. They prefer to eat food such as insect larvae, crustaceans, worms, minnow fry and small molluscs and, because they are predatory fish, they will even eat other young pumpkinseed fry.

Pumpkinseeds do spawn in the UK but they have a very low survival rate due to not growing big enough and healthy enough to survive the winter period. But in hotter places in Europe they have a higher survival rate. The pumpkinseed is benefitting from global warming because, as the winters are not as cold, the amount of young fish that survive winter is increasing. Pumpkinseeds start spawning in late spring or early summer and only when the water temperature is 13-17 degrees do the males start their nest building. They build nests in shallow water in silt, gravel or sand, on the lake bottom near or in cover.

The pumpkinseed preferred habitat is a warm, calm lake, pond or pool and small, slow-moving rivers with plenty of vegetation that provides lots of shade and protection from predators such as other fish or cormorants. They like clear open water and areas to find shelter to hide in and are nearly always found near the bank next to cover. If the pumpkinseed feels safe they will group together and spend a lot of time in shallow water and, as long as there is vegetation nearby to hide in, they will stay in a shoal. Pumpkinseeds usually travel together in shoals that could include other species of fish. Young fish will travel in large shoals but the adults will travel in pairs or small groups, swimming alongside vegetation and looking out for any food that may have fallen into the water. Pumpkinseeds are active throughout the day but rest at night near the bottom or in protected areas in rocks or near submerged logs.

My experiences of fishing for pumpkinseeds 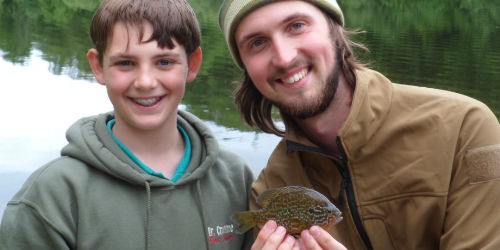 I have only ever caught a few pumpkinseed in the UK and these were on stocked commercial fisheries in southern England. I fished with a small float, a small hook and maggots as bait, on the marginal shelf next to reeds that provided them cover to comfortably feed in. My best experiences with them were in west central France while filming ‘Mr Crabtree Goes Fishing’.

Jack Perks and I were fishing for perch and bass, we ended up catching a few pumpkinseeds. I set myself a mission to catch and show John Bailey his first ever pumpkinseed. I caught one on the fly of the surface in some tree roots, put it in a big carp net and ran back to John so he could get his camera. But when we got back to the fish in the net the pumpkinseed had disappeared. We examined the net only to find there was a large hole in the mesh. We did catch a few later than day and happily John Bailey broke his pumpkinseed duck.