The river of glittering beauty

There is little doubt that in 1974 South Yorkshire’s River Don represented the most extreme example of man’s ruthless exploitation of his environment.

The river was grossly polluted and fishless throughout almost its entire catchment, and in addition it had suffered immense physical damage.

It had lost almost its entire flood plain, lost two of its major tributaries, the Torne and the Idle, had 70% of its channel modified, had 27 reservoirs abstracting its water and had more than 350 weirs creating a barrier to fish movement.

Compare this with the original River Don which was one of England’s finest salmon rivers. The evidence to support this statement can be found from a number of sources including a quick examination of the rivers topography.

This reveals that the Don was gifted with an unusually large number of tributaries, most flowing down from the high Pennines. These streams provided exceptional spawning and nursery sites for salmon and collectively would have produced immense numbers of fish.

Further evidence can be gleaned from ancient market records in Doncaster which show that salmon was so abundant that it was shunned as a food by all but the very poorest in society. Finally, research carried out into otter populations in Western Europe has demonstrated that the River Don once supported one of the largest concentrations of this species, a clear indication of the river’s fish productivity.

Many people believe that the Don’s decline began at the start of the Industrial Revolution but we need to look much further back than that to find the first impacts of human activity on the river.

It was the introduction of a new form of technology - water power, introduced by the Normans, which began the river’s decline. Weirs and dams began to be constructed to harness the energy of the flow but, at the same time these structures began to restrict the free movement of fish.

Most of these early structures were small and built with a shallow down slope so would have had limited impact on stronger swimming species such as salmon. However to many species of coarse fish they would have represented a formidable barrier. Over the centuries, as the Don Valley became increasingly industrialised, the size and design of weirs became a greater and greater barrier to fish movement.

The Industrial Revolution and disappearance of the salmon 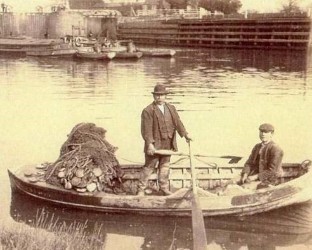 By the early 1700s Sheffield and Rotherham had become major centres of industry and pressure was brought to bear to turn the Don into a navigation. This finally happened in 1732 but to facilitate this, it became necessary to construct much bigger weirs. With construction of the navigation enabling access to wider markets, industry flourished and it is recorded that by 1760 there were 161 weirs restricting the flow and movement of fish between the centre of Sheffield and the Don’s headwaters up in the Pennines.

With so many formidable barriers to their movement, it became inevitable that the river’s salmon population went into terminal decline and by 1796 it is recorded that the species had disappeared from the river in Sheffield. Throughout the rest of the catchment there was a similar story and it seems clear that by the early part of the 19th century the Don’s once magnificent salmon population had been eradicated.

Interestingly, reports from various sources indicate that the same fate had not entirely befallen the river’s coarse and trout population, although it is undoubtedly the case that their numbers would have been a shadow of their former self.

What this does demonstrate is that it was not water quality that had destroyed the salmon population. However this situation was to be short lived as the industries were growing at an exceptional rate and needed more and more labour to support their activities.

The population of Sheffield was doubling every ten years and with no adequate forms of sanitation, much of their waste was simply flushed into the river and its tributaries, reducing them to little more than open sewers. By 1860, it is recorded that the river throughout Sheffield was grossly polluted and lifeless, poisoned by the very people who should have been enjoying the recreational benefits that the river had traditionally supplied.

These bodies were set to oversee the protection of the rivers mainly in respect of protecting against flooding. However it should be remembered that at that time many people derived their water supply from local streams and it seems likely that the courts ensured that industries did not cause pollution.

Over a century of appalling pollution 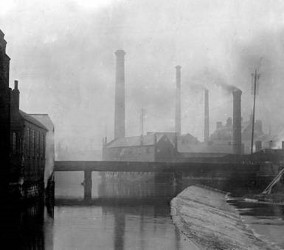 However, with the river becoming grossly polluted by human waste, the courts efforts became futile and all control seems to have been lifted by the 1850s, allowing industry to contribute its poisonous load to the already terminally damaged environment of the river.

Throughout the rest of the 19th century and for most of the 20th these appalling conditions persisted despite the efforts of a number of influential people to get the authorities to act. One notable individual was the writer Ernest Phillips who published many books on angling. Phillips wrote the following lines which reflect on the ignorance, greed and apathy displayed by generations of people to their once glorious river 'the hand of man and the neglect of our ancestors has deprived us of a river which must have been a vision of glittering beauty'.

Sadly Ernest Phillips died before any significant change occurred in the condition of the river but his efforts were carried on by many others. These included officials of Doncaster Angling Association who for many years throughout the 1970s held a protest match at Doncaster to draw attention to the disgraceful condition of the river.

In 1974 the Government finally took action and introduced legislation which brought about the formation of the modern water industry. In Yorkshire the responsibility for flood defence, water supply, sewage treatment, regulation of pollution and fisheries passed into the hands of the Yorkshire Water Authority.

With increased powers, this organisation set about the task of addressing the issues which beset the rivers and, although progress was initially slow, evidence of the success of their efforts began to show by the middle part of the 1980s. Small isolated pockets of fish began to appear, demonstrating that water quality was beginning to improve. This provided the stimulus to greater efforts and has led to the restoration to the river we know today.

This blog is brought to you courtesy of Chris Firth, Don Rivers Trust.

The history of the restoration of the Don Fishery will be related in the second of these articles.