The rebirth of the River Don’s fishery

For more than a decade after the formation of the modern water industry in 1974, the Don and its major tributaries, the Rother and Dearne, remained virtually fishless.

Only in the upper reaches of minor tributaries were there remnants of the river's brown trout population and even these remained under threat from development and intermittent pollution.

One such area was the headwaters of the Don itself above Hazlehead. Here a remnant population of trout existed, although its future was threatened by the construction of a new dam at Dunford Bridge.

During the construction large amounts of sediments were released into the river threatening to destroy what little remained of the spawning gravels which had sustained the trout population. These developments caught the attention of members of the South Yorkshire branch of the Trout and Salmon Association (T&SA) who recognised that there was potential for the fishery to not only be protected, but improved and managed as a recreational resource for their members.

The Association approached the Water Authority, who agreed to release flushes of water from the reservoir at Winscar in an attempt to flush away the sediments. This proved to be very beneficial and from that point on, the future of the fishery became secured as progressive improvements were carried out by the T&SA.

One initiative proved particularly beneficial to the redevelopment of the Don fishery and that was the decision to release grayling into the river. The fish were obtained from de-stocking exercises carried out on the West Beck in East Yorkshire and were released at Hazlehead. To the amazement of everyone concerned the fish adapted rapidly to their new environment and, within the space of a few months, had spawned successfully. From this initial stocking grew the population of grayling which now extends to downstream of Sheffield.

Further down the river at Sheffield things were far less advanced. The still-polluted conditions prevented any attempts to redevelop fish populations. Electro fishing surveys carried out by the Water Authority's Fisheries Teams revealed only occasional sticklebacks and even these were in isolated pockets where water quality was ameliorated by cleaner water entering from small drains and streams. However, by the mid-1980s signs of an improvement at last began to appear.

The first appreciable concentrations of coarse fish to develop in the City of Sheffield occurred downstream of the confluence with the River Loxley.

The diluting effects of the Loxley’s flow helping to ameliorate the conditions in the main river sufficiently for their short term establishment and survival. Increasingly, these populations began to spread with further concentrations beginning to occur below the numerous weirs which provided slightly improved conditions due to their aerating effect.

These fish were escapees from the numerous dams along the system which had been developed as coarse fisheries. The populations lived a precarious existence as they were regularly forced downstream by floods and intermittent deteriorations in water quality. 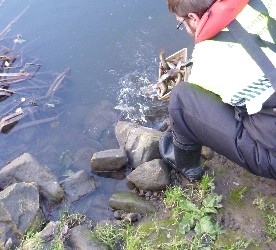 Nevertheless, they provided the incentive for experimental restockings to be carried out by the Water Authority fisheries teams. Stock obtained from netting operations were released at various points and their progress monitored.

Whilst these operations provided modest success, the fish were far from ideal for introduction into a flowing watercourse, not having the muscle development required to sustain themselves in the faster flowing reaches. However the answer was at hand. Experimental work was being carried out at a new fish farm owned by the Water Authority at Calverton near Nottingham. Riverine species such as dace, chub and barbel, as well as roach were being produced in significant numbers for the first time. Before release into the wild, these fish were subjected to flowing water conditions in an effort to simulate the conditions they would encounter in the rivers.

The first large scale restocking using this supply occurred on the 11th January 1990 when 2,000 dace and 2,000 chub were provided as a grant by the newly privatised Yorkshire Water PLC.

Introduced between Salmon Pastures and Meadowhall in Sheffield, the fish rapidly adapted to their new environment, clearly demonstrating the benefits of flow entrainment by the numbers which took up residence close to the points of introduction. These fish, together with further introductions, including barbel, formed the breeding populations which today sustain fish stocks throughout the city.

Fish reported in the Lower Don

As early as the late 1970s occasional reports of fish sightings were being received from the Lower Don below Doncaster. One source of evidence was the water intake screens at Thorpe Marsh Power Station. Occasional fish became trapped on these screens and were recovered and provided for examination.

The presence of these fish led to speculation that a breeding population existed. However, on examination it became clear that these fish originated from adjacent still waters and, like the fish in Sheffield, were transient, being forced downstream by a combination of poor water quality and flow.

Progressively however, over the next ten years, the populations in this part of the river began to grow, mirroring improvements in water quality and by the late 1980s it became clear that some natural reproduction was occurring.

These improvements were also beginning to occur elsewhere. The weir pool at Sprotbrough began to produce catches of roach and gudgeon to the few adventurous anglers who chose to try their luck. There was also evidence of rapidly increasing populations in the South Yorkshire Navigation downstream of Doncaster, and catch information suggested that a range of species were reproducing there on an annual basis.

With the opportunity to stock the river, using fish from the farm at Calverton, Fisheries staff from the National Rivers Authority and later the Environment Agency, began a series of large scale stocking operations. Tens of thousands of roach, chub, dace, bream and barbel were released into many locations on the Don and its tributaries and rapidly the river began to be recognised as a fishery worth visiting. Fishing rights were suddenly in demand and matches became a regular feature at venues such as Sprotbrough.

Challenges of in situ weirs

By the end of the 1990s the river was producing good catches throughout its length and the future of the fish populations seemed to have been secured, but things were not quite what they seemed.

Whilst the chemical condition of the river was vastly improved, there remained features of the physical damage which continued to affect the long term sustainability of fish stocks.

This is a perfectly natural phenomenon and in a natural river system many of these fish would migrate back upstream when the river levels dropped back to normal.  However, when weirs are present this cannot occur. The effects of this can be significant with some reaches left with vastly reduced populations, leading to complaints from anglers of poor catches. 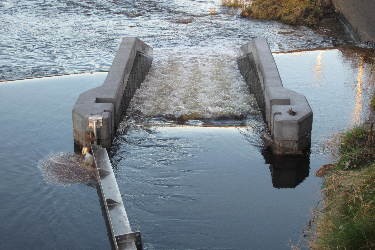 Addressing this issue became a priority for the Environment Agency who, working with partners such as the Canal & River Trust and the Don Catchment Rivers Trust, began to build fish passes to provide the opportunity for upstream migration to occur.

The first of these operations took place at Doncaster adjacent to the prison in the year 2000. Using a channel made redundant by earlier flood defence works, a 120 metre long rock in ramp fish pass was built to a design not previously tried in this country. The ramp proved extremely efficient and for the first time in more than 700 years fish were able to move freely between the tidal and non-tidal reaches of the River Don.

Since 2000, fish passage facilities have been provided at a further six locations on the Don, together with a further three on the River Dearne. Funding has also been secured for a further six to be built on the Don during 2016/17. 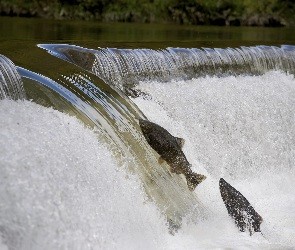 The recovery of the River Don fishery from the appalling conditions of 1974 is a remarkable story. Not only does the fish population have a secure future, but it continues to go from strength to strength. Barbel in excess of 16 lbs are being caught and the river and its associated canal network regularly host fishing matches, some of national importance. Perhaps most remarkable of all is the return of salmon. Absent for more than 200 years, this species is returning to the river in increasing numbers and the first evidence of them reproducing in the river was found in the River Dearne in 2015.

The story of the River Don demonstrates how ruthless man can be in the exploitation of his environment, but it also demonstrates what can be achieved with vision, dedication and commitment and the desire to leave a better world for our children.

This blog is brought to you courtesy of Chris Firth of the Don Catchment Rivers Trust.