In our latest guest blog, Eric Edwards recounts how this event first got off the ground.

Way back in 2004, the enlargement of the European Union meant that ten new countries joined the European Union. Their countrymen became eligible to move to any member state to live and work. As we know many came to the UK, particularly Polish people, but also many Lithuanians, Latvians and other nationalities. It is fair to say that the appearance of these newcomers on the banks of our rivers, canals and lakes brought a mixed reaction from the angling public. Some of them brought with them customs that didn’t fit well with the British way of fishing, particularly the habit of taking the catch home to eat. At some locations, friction soon developed between the indigenous anglers and the new wave.

Many migrant anglers were, however, keen to fit in and soon adopted the traditional British fishing ways, even converting their friends in the process. The fact is that while there are still a small number of migrant anglers who illegally take fish, the majority are law-abiding anglers who do not. But the good news is rarely publicised and so who gets to hear about it? Understanding between the two camps has been slow to develop.

Our governing body, Angling Trust, took the initiative and developed the Building Bridges project. This is very much aimed at integrating migrant anglers into mainstream UK angling. Building Bridges is headed up by Poland’s Radoslaw Papiewski and Patrycja Bury, along with Martynas Pranaitis who hails from the Baltic state of Lithuania. It was in support of this excellent initiative that the Canal & River Trust International Lure Challenge came about. 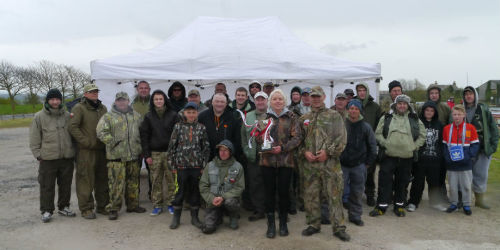 The competition was started last year on what turned out to be a bitterly cold, wet and windy day in May when England met Poland on the banks of the Pike Angler’s Club’s controlled Lancaster Canal fishery. Fourteen English anglers were soundly beaten by fourteen Polish anglers. Although England did at least produce the individual best angler on the day, Poland stormed to a thumping victory and took home the handsome annual trophy which had been kindly donated by the Trust.

This year, it was decided that the competition would be fished on a different canal venue. A stretch of the Grand Union Canal controlled by the Lure Angler’s Canal Club was chosen as the venue. The event was organised by the very capable Patrycja Bury and was advertised far and wide. As a result, it became a much larger event with teams from four different countries; England, Poland, Lithuania and Romania taking part.

Nearly eighty anglers lined the towpath and conditions could not have been more different from the previous competition with a cloudless sky and temperatures soaring to 26 degrees Celsius, These are not really good conditions for catching predatory fish on lures. Interest in the event took us by surprise and we had something of a hiccup when we realised that we didn’t have enough space to park all the cars that would be brought by such a big field. Fortunately the Trust’s John Ellis stepped in and helped us to negotiate a large parking area with an adjacent landowner 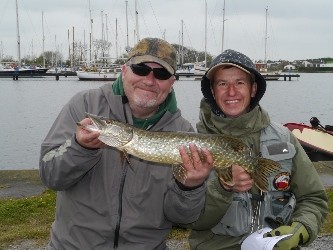 The event went fantastically well and with a great spirit of co-operation. The anglers were put into pairs, each angler fishing with another of a different nationality and they were to mark their catches on a scoresheet which was then ratified by a signature from their partner. The system worked seamlessly. Not only was it equitable and fair but it also made people of different backgrounds, nationalities and customs work together towards a common aim. By the end of the day, many new Facebook friends were made and new partnerships struck. It was the most perfect way to raise understanding of one another’s culture.

Once again Poland won the day in the team event, thus retaining the Canal & River Trust trophy. For the second year in a row the top individual angler was an Englishman. The results were as follows:

The day concluded with a scrumptious Polish sausage barbecue generously provided by the Polish team. Radoslaw Papiewski was chef for the day and apart from the few sausages he managed to drop into the coals the food was excellent and plentiful. Many thanks to the landlord of the Two Boats Inn who gave us the use of their toilets for the day and who also allowed us to use his green for the barbecue. Thanks also to the Lure Anglers Canal Club for the use of their facility.

Looking forward to 2017 and beyond

Everyone associated with the event is looking forward to its ongoing expansion. There is no reason why other East European nations such as Estonia, Latvia, Ukraine to name but a few should not enter a team in future years. Of course, all of the home nations are equally welcome to get involved too. Please do get in touch if you would like to find out more about how your nation can take part in 2017.