Spotted anything fishy from your boat?

Fish theft has been in the news again recently. Sadly, within our profession, fisheries related crime is rarely out of the news.

Please help us protect the fish by keeping your eyes and ears open and then telling the right people with the appropriate degree of urgency if you do witness anything odd taking place.

Fishing with a rod and taking away the fish: it's illegal to take any native fish species away from a canal or reservoir, please call the Police on 101

Contact us and let us know which waterway is affected.

What is fish theft? 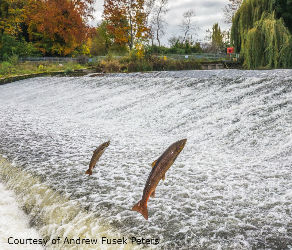 On the other hand, fish in rivers and streams, being free to swim freely for miles on end, are deemed to be wild. Wild fish cannot be stolen.

What is ‘theft of fishing rights’?

You can commit a version of theft without physically removing someone’s property. Here’s an analogy – albeit with a few subtle legal differences – that will help explain the position. If a person was to walk onto a golf course and complete the 18 holes without permission or payment to the owner of the golf course, they would have committed an offence. They would not have needed to have physically removed a bucket of sand from a greenside bunker or have stolen the flagpole from the 18th green.

The same situation applies to fishing rights. You don’t need to physically remove anything from a fishery per se. An offence is committed under para 2 Schedule 1 of the Theft Act 1968 if a person takes or destroys or attempts to take or destroy fish where there is a private right of fishery. The word ‘take’ does not need to involve any physical removal. A fish may be ‘taken’ even if it is ultimately returned to the water totally unharmed.

In summary, being at a fishery and undertaking angling activity without the correct permission is sufficient for a crime to have been committed under schedule 1 of the Theft Act 1968. 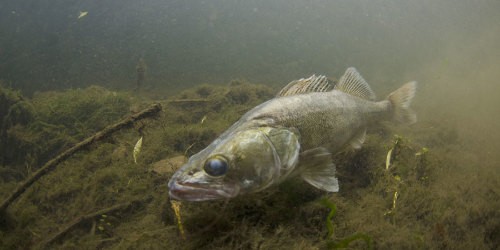 The stealing of fish using rod and line

Catching a fish by rod and line and then taking the fish away from a Canal & River Trust owned canal or reservoir fishery is an act of theft.

Our agreements with clubs and the conditions of our Waterway Wanderers permit do not permit the removal of fish. There is one caveat to that. Non-native fish species cannot be returned to the water by anglers and must, as the law currently stands, be removed. The provisions relating to non-native fish are covered by two separate pieces of legislation. These are the Wildlife & Countryside Act (1981) which is enforced by the police, as well as under the Keeping & Introduction of Fish Regulations (2015) which is regulated by the Environment Agency (EA). Who said fisheries law was straight-forward?

Fish theft crime should be reported to the police as they are the body responsible for the enforcement of the Theft Act. To do this, simply dial 101. Don’t delay, as in the ideal world the culprits will need to be caught red handed in the act of committing theft. Photographic evidence – if it’s able to be gathered safely – and car registration numbers are always good evidence to collect. This evidence could be useful to the police in taking the case forward. Even if the police are not able to attend, it’s imperative that the crime is formally registered. For without the police building up the true picture of the extent of local crime, they will not have the evidence to fully appreciate where their priorities might be. Sometimes the police will say, genuinely but in error, that fish theft offences are an EA matter.

Use of unauthorised instruments to capture fish

There are many fishing methods designed to capture significant quantities of fish in a potentially much more efficient way that rod and line. These include nets, traps, set lines, fishing baskets and the use of electro-fishing. Many of these implements are termed ‘fixed engines'. It’s unlikely that anyone other than us, our appointed contractors and the EA will have permission to use nets and electrofishing equipment. They would not be used at night except perhaps in an emergency such as a catastrophic canal breach.

Report the use of illegal fishing instruments

The EA are the body responsible for enforcement of the use of illegal fishing instruments under the Salmon & Freshwater Fisheries Act 1975 (as amended). Should you come across an incident involving the use of an illegal fishing method, you must call the EA 24-hour hotline Freephone 0800 807 060 as soon as possible upon witnessing the activity. You will be asked for a location, ideally a postcode, or failing that a bridge and lock number together with a description of the activity taking place.

Speed of reporting is key. It needs to be done as soon as practically possible. However, never put yourself in personal danger. If you came across an unmanned illegal instrument, please do not remove it unless instructed to do so by the EA. The reason for this is that the EA may decide to undergo surveillance operation in other to catch the miscreant red handed when they return to see what they have managed to illegally capture.

Recently, we received more than half a dozen separate calls from the public during a boom boat electrofishing exercise. If you have not seen one, an electrofishing boom-boat typically looks like this. 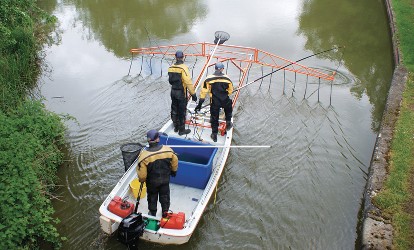 This boat in the picture belongs to our current fisheries contractors. However, if you do come across anyone electrofishing in a fully watered canal, particularly if the apparatus looks different to that in the photograph, then we very much want you to report it to us. The best number for this is 0800 479 9947, although those of you who have regular dealings with the Trust’s fisheries team can be all means call their local fisheries contact directly.

Bring in the bailiff

The powers, or lack of them, of angling club bailiffs in dealing with fish theft

As the heading suggests, the volunteer angling club bailiff has very few legal powers. The term bailiff is a misnomer in as much as only warranted EA officers have the formal powers of bailiffs. EA bailiffs, like police officers, have powers of arrest. For more detail on the powers of bailiffs read our bogus bailiffs blog.

A more legally accurate term for an angling club bailiff is a ‘water keeper’. The legal powers water keepers possess are those in common with ordinary citizens, plus those powers they possess by the authority of their ‘employer’; i.e. the person or organisation that owns the fishery. Put simply, they possess the power to enforce angling club/fishery rules, but not a lot else. A further key strength of the voluntary angling club bailiffing sector is that they undertake an invaluable role in acting as eyes and ears of the waterways. Just as with eagle eyed boaters, our waterways benefit immensely from their presence and the disappearance of club bailiffs would be a tremendous loss.

How to become more actively involved in fisheries enforcement

A few years ago, Angling Trust, the national governing body of angling in partnership with the EA, launched the Voluntary Bailiffing Service (VBS). Find out how you can make a difference as part of the VBS.

And finally, fisheries law is quite complex. The information in the article is for general guidance and it is not definitive legal advice. Should you ever require legal advice about what action to take, please contact an advisor or solicitor.